Nightbirde quickly became a household name for her Golden Buzzer performance on America's Got Talent earlier this year. 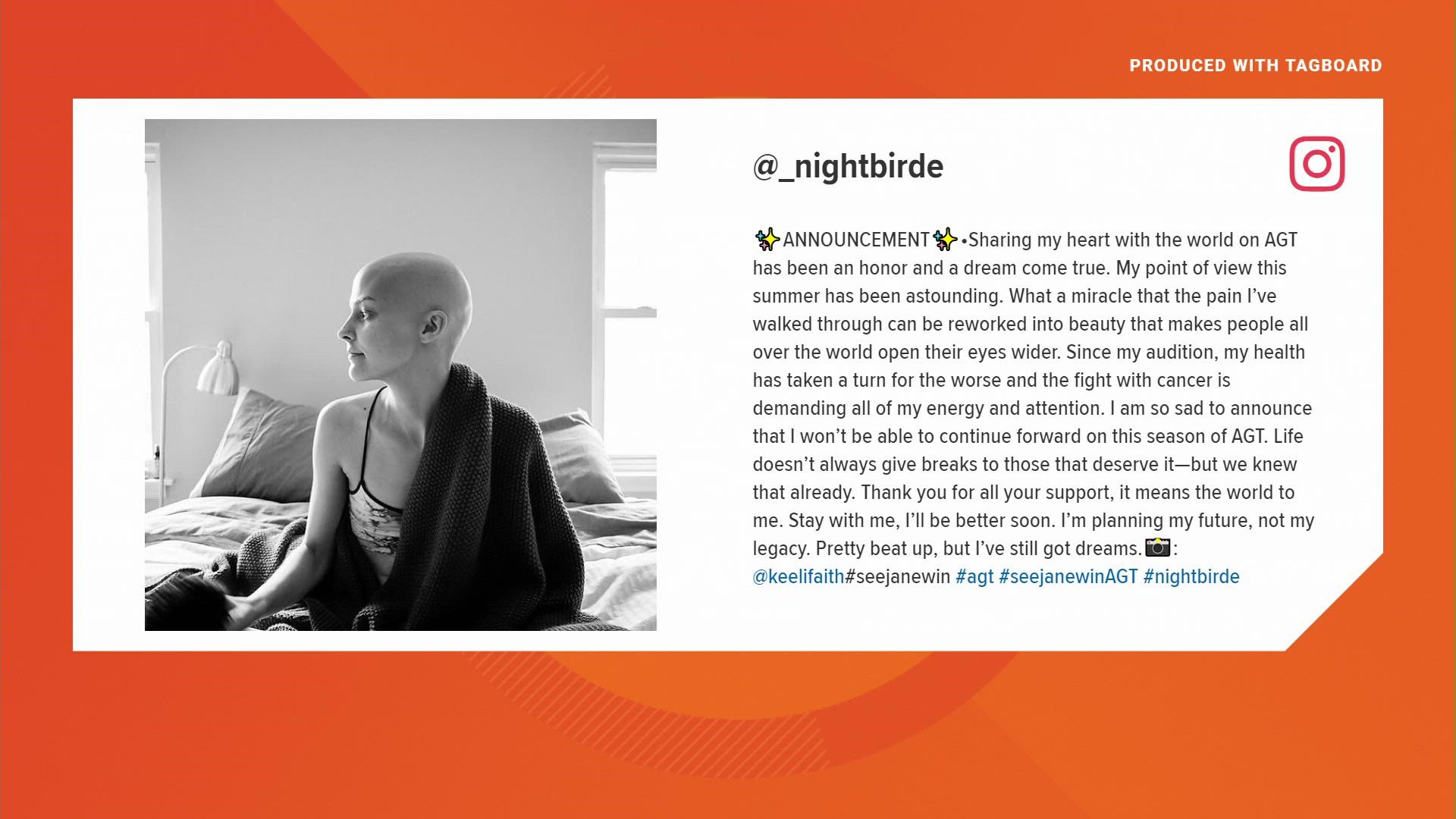 ZANESVILLE, Ohio — "It’s been a while since I have felt fully awake. Pain can be so surreal and disorienting that I often feel like an observer of my own life, and not a participant of it."

Those are the words of Zanesville native Jane Marczewski -- the performer also known as Nightbirde -- as she shares an update on her life.

"I think about the dreams my heart has carried since I was little," she wrote on Instagram this week. "Dreams of singing to the whole world at once; writing words that sink so deep they don’t need to be remembered; being a truth-teller, a hope-holder, a strength-sharer. Wait, am I in the dream? It’s not how [I] wanted it, but this is the dream. I’m in it. It’s happening now."

Nightbirde quickly became a household name for her Golden Buzzer performance on America's Got Talent earlier this year, but had to leave the competition saying her health had "taken a turn for the worse."

"I thought it would be sparklier than this," her post continues. "I didn’t imagine standing before the world with so many bruises. I didn’t imagine that in my shining moment I’d be suffering in front of an audience. I’ve always expected miracles. I thought the miracle would be that I could skip to the end, spared of pain. I thought the miracle would make me scar-free, brand new."

She also writes that she did get a miracle -- just not the one she wanted.

"I get to look for light and find it," Nightbirde writes. "I get to see how much love can endure. I get to walk the journey with thousands of people like me, who can’t stop hoping, no matter how hard we try. If we only take the miracles that taste sweet, I don’t think we’ll ever taste one. If we wait until we have the perfect song, I don’t think we’ll ever sing. Don’t miss it -- it’s now. We are in the miracle, we are in the dream."

Shortly after leaving AGT, Nightbirde launched a GoFundMe to help pay her medical bills. That fundraiser has since generated more than $663,000 as of 8:30 a.m. Thursday. You can make a donation HERE.

“It pains me to ask again for money, but I ask as Moses did when he needed water, and he spoke to the rock; as the friend banging on his neighbor’s door asking for bread in the night,” according to her GoFundMe page. “Not because I am entitled to your help, but because I desperately need it.”

Nightbirde earned a Golden Buzzer from judge Simon Cowell when she first auditioned on AGT with an original song titled It's OK. It's a moment that has now been viewed more than 37 million times on YouTube.