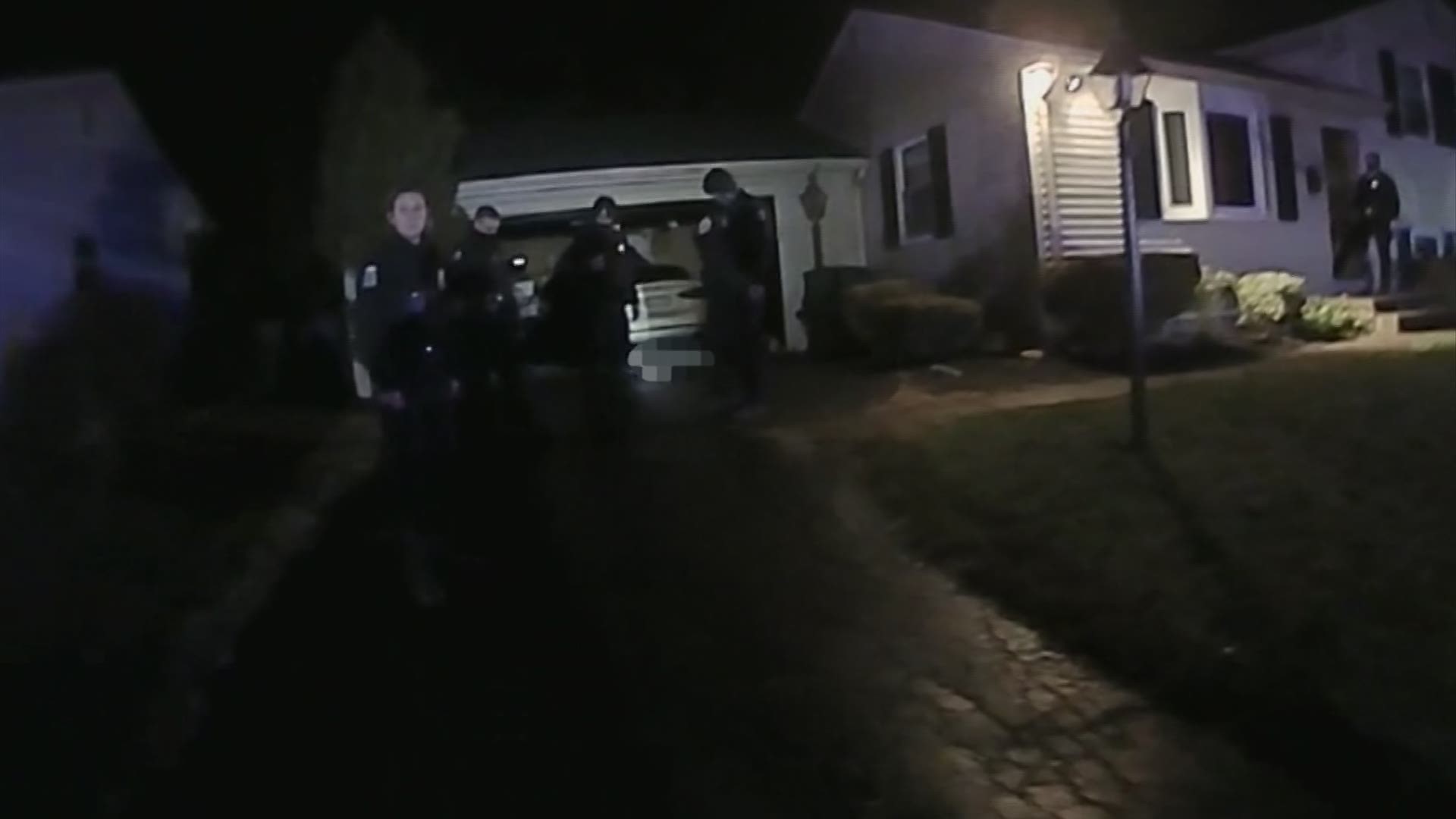 COLUMBUS, Ohio — Newly released body camera videos appear to show there was at least a 12-minute delay before officers began conducting chest compressions on Andre Hill – an unarmed Black man who had been shot by Officer Adam Coy.

The body-camera video from Officer Amy Detweiler, who responded to the initial non-emergency complaint call with Coy on December 22, shows her and other officers securing the scene, putting up crime tape and handcuffing Hill in the minutes after he was shot.

Ten minutes into Detweiler’s body camera video, she can be heard wondering why an ambulance still isn’t on scene.

An officer on scene told EMS personnel that he had been performing chest compression for about three minutes when the ambulance squad arrived, a 10 Investigates’ review of the video shows.

Those chest compressions only began after the urging of another Columbus Division of Police officer asked other officers on scene if anyone was helping Hill.

According to documents released by the Columbus Division of Police earlier this week, Detweiler told internal affairs investigators that Officer Coy shot Andre Hill after claiming there was a gun in one of Hill’s hands as he exited the garage of a friend’s home on Oberlin Drive on December 22. Detweiler said both she and Coy approached the house with their guns drawn responding to a non-emergency disturbance call.

Detweiler said she did not observe Hill to be a threat, did not see his right side and did not see a weapon.

No weapon was recovered at the scene from Hill, who was unarmed and holding a cellphone in his left hand when he was shot.

He was later pronounced dead at an area hospital.

The Columbus Division of Police released additional body-worn camera footage Thursday from other officers who responded to the fatal shooting of Andre' Hill.

"There were many other officers who responded to the scene. None of them used deadly force. But as seen in these videos- few of them rendered first aid to Mr. Hill as they waited for a medic," Quinlan said in the statement.

During a brief telephone interview with 10 Investigates Thursday, Quinlan said that: “there are a few people who I am bothered with,” he said wondering “why they didn’t do more.”

Quinlan did not name specific officers because a separate internal affairs investigation into the actions of other officers on scene is in its infancy and they will be given the opportunity to explain their actions, Quinlan said.

Columbus Mayor Andrew Ginther says he was "horrified" by the time that passed before any officer provided aid Hill.

In a press conference held Thursday, National Civil Rights Attorney Ben Crump said Columbus police officers at the scene tried to handcuff Hill after the shooting before any medical assistance was offered.

Hill’s family is calling for Coy to be arrested, charged and to serve time. They also blame CPD for keeping Coy on the department after 90 complaints were filed against the officer.

Earlier this week, Officer Amy Detweiler was reassigned from her normal duties as the internal investigation continues.

“My initial reaction to the videos released today was anger and deep disappointment. And I know it is horrifying to everyone who looks at it. One of the core values of the Columbus Division of Police is compassion. And the body-worn camera video released today shows little evidence of that.

Let me repeat what I said last week: Andre Hill should be alive today. A Columbus Police Officer is responsible for his death. I cannot defend it. I cannot make it right.

But I will do what is in my power.

Adam Coy is the man who fired the shots that took Andre Hill’s life, and he is no longer a Columbus Police Officer. His violations of policy and standards were so clear-cut, and so egregious- his termination could not wait. He now faces an independent criminal investigation by the state, and the U.S. Department of Justice.

There were many other officers who responded to the scene. None of them used deadly force. But as seen in these videos- few of them rendered first aid to Mr. Hill as they waited for a medic. We are investigating, to get to the bottom of who upheld the policies and standards of the Columbus Division of Police, and who did not. Because of the large number of officers at the scene, the large amount of video to examine, the many interviews that have to be done- I do not yet have those answers for you. But I give you my word- I will. You will have the answers you demand and deserve.

And we are not waiting for those answers to take action. Last week, I imposed tighter, tougher policies for all Columbus Police Officers when it comes to use of their body-worn cameras, and their duty to render first aid.

As a police chief, and just as a human being, the events of the last week have left me shaken, and heartbroken for the family of Andre Hill. Every man and woman who wears this badge should feel the same. I will not tolerate a repeat of these failures. And where officers failed, they will be held accountable.

Once again, I ask you to join me in praying for Andre Hill, and the comfort of those who loved him.”

“Like most who have watched the additional body-worn camera footage from the shooting of Andre Hill and the time following, I am horrified by the time that passed before any officer provided aid to Mr. Hill. Our officers are trained to provide potentially life-saving care, and at the very least, comfort in these situations. One of the Division of Police’s core values is compassion. None of this was evident in the video released today. I have directed Chief Quinlan to investigate the events of Dec. 22 completely and thoroughly, and to hold all officers who failed to uphold Division standards accountable. This video is also being shared with BCI who continues to conduct the criminal investigation into the shooting death of Mr. Hill. The family and the community deserves answers.”