Tom Stalf and Greg Bell resigned from their positions in late March. 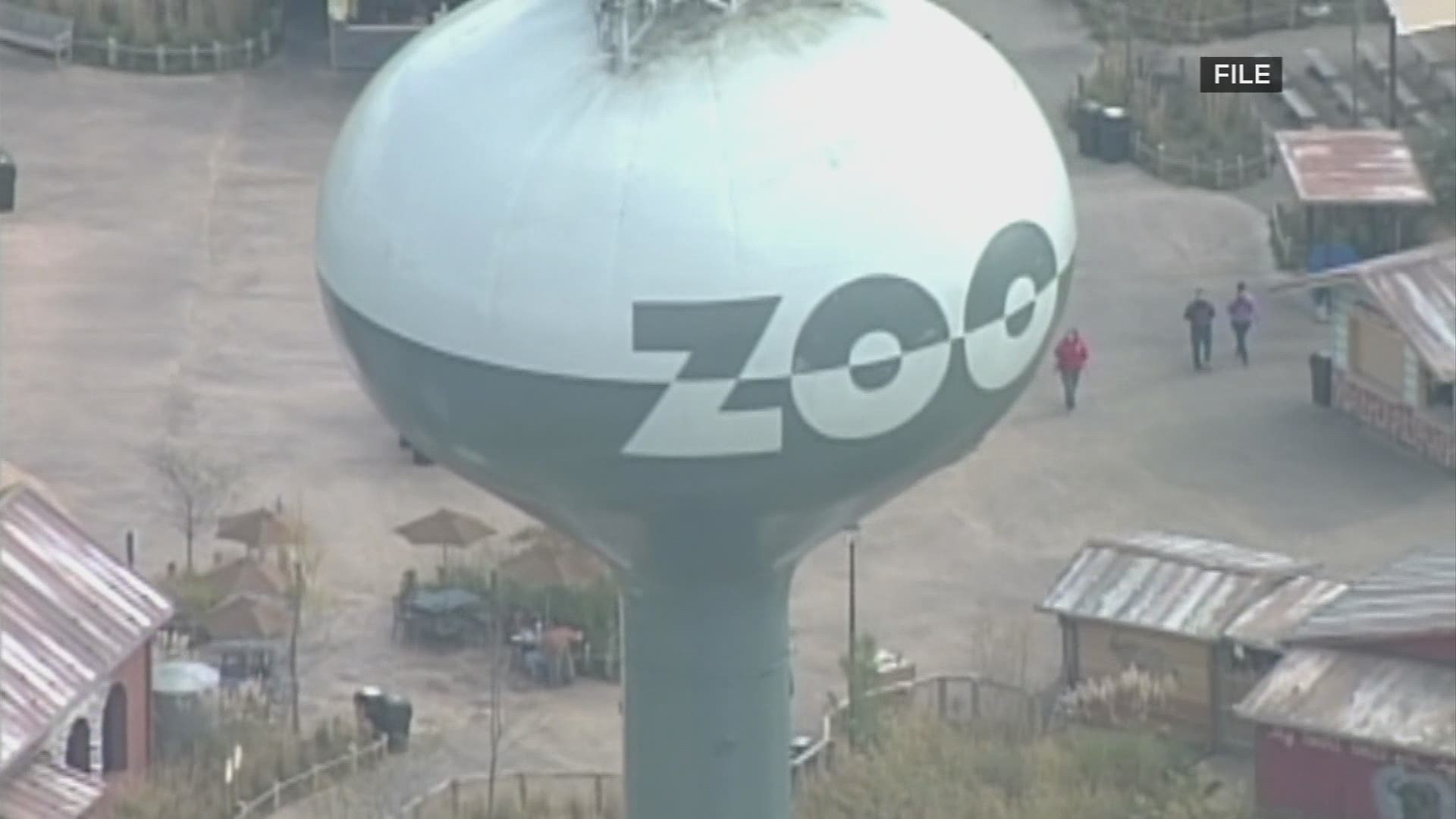 The Columbus Zoo and Aquarium is releasing a firm's preliminary findings and recommendations after an internal investigation into possible misuse of zoo resources.

A Columbus Dispatch report prompted the internal investigation, reporting the zoo's president and CEO Tom Stalf and Executive Vice President and CFO Greg Bell let family members live in houses controlled by the zoo and got tickets for family members for entertainment events.

Both Stalf and Bell resigned from their positions.

On Tuesday, Porter Wright Morris & Arthur, LLP released the preliminary findings and recommendations of its "limited scope investigation" to the head of the zoo's board of directors. In a letter to Chairman Keith Shumate, the firm said over two weeks, it "interviewed 20 witnesses and reviewed hundreds of pages of internal Zoo documents." The firm said it also interviewed former and current zoo employees, third parties, and key witnesses including Stalf and Bell.

The firm clarified none of the witnesses testified under oath and they did not have the authority to subpoena anyone. According to the firm, Stalf and Bell had counsel present during their interviews.

In an emailed statement, the Franklin County Board of Commissioners wrote in part, "We are pleased that the zoo has also released these preliminary findings to the public and appreciate its efforts to be transparent with the investigation."

The Board went on to write, "We are concerned about the extent of possible abuses raised by the Porter Wright investigation. We are in agreement with the report’s recommendations that further investigation is needed and that the investigation should be broadened to include all trading of products and services. We look forward to the additional recommendations that will be brought forth as this investigation moves forward. We believe the findings support the critical need for the zoo to adopt a structure for routine forensic audits and a separate accounting of taxpayer funds. "

In a joint statement to 10TV on Wednesday, Stalf's attorneys Rex Elliot and Mark Collins wrote, "It is not very often that we look forward to participate in an investigation done by the Ohio Attorney General’s office. However, in this situation we are relieved that a proper investigatory body with experience in being fair will be conducting a complete and thorough investigation. Fair investigations do not start with two scapegoats and work backwards to get their desired results. Rather, fair investigations delve deep into each detail to determine the truth. Fair investigations are not based on the number of witnesses interviewed, but rather the actual interviews of first hand witnesses who were involved in the actual transactions. We have evaluated investigatory reports for the past 28 years and it is evident that this report was published under pressure from the media. We welcome the opportunity to cooperate in the investigation so true and accurate conclusions can be reached."

1. The Zoo’s former Vice President of Marketing created a marketing strategy to entertain corporate clients and potential sponsors at sporting and entertainment events. A review of emails and witness statements substantiates that Stalf and Bell used tickets paid for by the Zoo for personal use without reimbursing the Zoo. This took two forms. First, for a period of time the Zoo had a suite for Ohio State basketball games and a suite for Columbus Blue Jackets’ games that Stalf and Bell used. Second, the Zoo procured and paid for tickets for events for Stalf and his family for other events. The Zoo no longer has those suites.

With respect to Zoo suites, Stalf and Bell used the suites and the accompanying food and beverage privileges for themselves and/or their family members without reimbursement to the Zoo. The documentation for the use of the suites does not disclose the specific individuals attending the event – a fact that is in itself a matter of concern – but numerous emails support a finding that the suites were used for personal use, including cost of the food and drink. Stalf admits to only one personal use of the suite – taking his son’s basketball team, at the Zoo’s expense, to an Ohio State basketball game.

In addition, documents indicate that the Zoo procured tickets and paid for events beyond the Ohio State and Blue Jackets. For example, the Zoo obtained and paid the costs incurred for the use of a suite for Stalf’s family at a Cincinnati Reds game – evidenced in part by a family photograph of the occasion posted on Facebook. On another occasion, the Zoo obtained tickets so Stalf’s wife could attend a performance of The Phantom of the Opera. Bell admitted he caused the Zoo to obtain approximately 60 tickets from the Columbus Blue Jackets so his son, who is also a contractor at the Zoo, could attend Columbus Blue Jackets’ games with his friends, solely for their personal use. We were not presented with, and have not located, any records demonstrating that the Zoo was reimbursed for any of the above tickets and related food and drink used personally by Stalf and Bell or members of their families.

Although the Zoo had for a period of time a marketing plan that utilized suites for Columbus Blue Jackets and Ohio State basketball, those marketing opportunities were largely confined to Stalf, Bell, and the Zoo’s former Vice President of Marketing. The philanthropic function of the Zoo – which has responsibility for donor relationships – had little access to these tickets.

2. Stalf and Bell arranged for their relatives to live in houses owned by the Zoo pursuant to arrangements by Stalf and Bell personally without the opportunity having been publicized or offered to Zoo employees. In 2013, the Zoo was gifted a house on Frobisher Drive in Dublin several miles from the Zoo. At Stalf’s direction, Zoo funds were used to renovate the property. Witnesses suggested that between $18,000 and $28,000 were spent on the renovations. Stalf’s in-laws moved into the property and the Zoo charged them $900 per month rent. Stalf said it was a coincidence that his in-laws became available to live in the house while it was under renovation.

The house’s availability was not advertised to the general public or all Zoo employees. According to Bell, Stalf himself determined the rental price, which never changed after it was initially established in 2014. Stalf asserts that the rent was in exchange for his in-laws making improvements to the property. There are no contemporaneous records demonstrating that his in-laws committed to or in fact improved the property, although Stalf made a list of the improvements shortly before commencement of this investigation. The Zoo paid utilities, real estate taxes, and for major repairs to the property. The Zoo sold the property as part of its sale of assets to address the pandemic for $267,500. The Zoo had previously been gifted another house located in Maine through a bequest. In that instance, the Zoo immediately sold the home rather than renting it.

Greg Bell rented a house owned by the Zoo on Powell Road to a college roommate of his daughter. His daughter also became a tenant of the property in Autumn 2017. Bell set the rental price for the property, and the rental price did not change while Bell’s daughter lived there. The Zoo paid utilities, real estate taxes, and provided maintenance. Bell admitted that he planned for his daughter to move into the house after her roommate. The property was not advertised to the general public nor offered to Zoo employees. Bell’s daughter vacated the house about two weeks ago, around the time this investigation began.

3. Zoo CEO Tom Stalf directed that a $2 million contract for the construction of cabins and a meeting space at The Wilds be awarded to a specific construction company selected by him without competitive bidding. Payment and accounting for the unbid contract work did not flow through the normal Wilds accounting process but rather was directed through CFO Greg Bell. At the end of the project, the construction company billed the Zoo a substantial cost overrun. According to Greg Bell, Stalf instructed him to pay the overrun bill, despite objections by Zoo and Wilds management. We are continuing to examine if there were any personal benefits associated with the award of this contract.

4. At Stalf’s direction, the Zoo purchased a recreational vehicle for $45,000 for Stalf’s exclusive use. Stalf inspected and evaluated the RV, along with another Zoo employee, before directing the Zoo to purchase it. Stalf stated that he directed that the purchase be made so he would have a place to stay when he attended events at The Wilds. It appears that Stalf used the RV at The Wilds one time. He admitted he used the RV for a personal trip to Put-in Bay with his family.

The RV was either stored at an off-site location or at Stalf’s home. The Zoo sold the RV for approximately $37,000 as part of the disposition of assets to address falling revenues from the pandemic. Stalf did not reimburse the Zoo for personal use of the RV.

5. The Zoo traded Zoombezi Bay admission tickets to the Wedgewood Country Club in exchange for a number of Wedgewood golf memberships. However, it appears that the only users of these memberships were Stalf, Bell, and possibly two others. This arrangement was terminated last week.

6. The Zoo utilizes a company that serves as a clearinghouse for trading products and services. For example, the Zoo “trades” golf at its Safari golf course for other vendor services. With the limited time and the limited scope of the investigation, this program was not reviewed, but in light of other instances of the use of Zoo assets for personal benefit, the program should be reviewed.

The firm has recommended several changes because of the initial findings. Some of those recommendations include that the zoo reviews its policies concerning competitive bidding, do a forensic audit to find out how much Stalf and Bell and their families should reimburse the zoo, consider separating the positions of chief executive officer from chief operating officer, and review its audit procedures to "ensure effective oversight and protection of public and donor funds."

The Office of Ohio Attorney General Dave Yost is conducting its own investigation into the allegations.

In a statement to 10TV, Board Chair Keith Shumate said, "the board is committed to continuing its work to address the findings in this report. The board has engaged a forensic auditor to delve into questions that were beyond the scope of the Porter Wright investigation. The Zoo’s Chairman Advisory Committee also is setting up a process whereby the board will, over the next several months, examine a wide range of governance, policy and protocol issues to ensure that all appropriate financial safeguards are in place."

The zoo's former executive director and Director Emeritus Jerry Borin has agreed to serve in an interim role as president and CEO. The board will begin a national search for a new CEO, according to the zoo.

"On behalf of Greg Bell, we welcome the release of the report. We firmly believe transparency is the most effective method whereby the Columbus Zoo and its governing board can most be improved. We continue to remain cooperative and trust that the inquiry will uncover all of the important recipients of concert tickets and gratuities."