The new Licking County high school has been opened one month after a levy passed in 2017 that pumped tens of millions of much-needed dollars into the district. 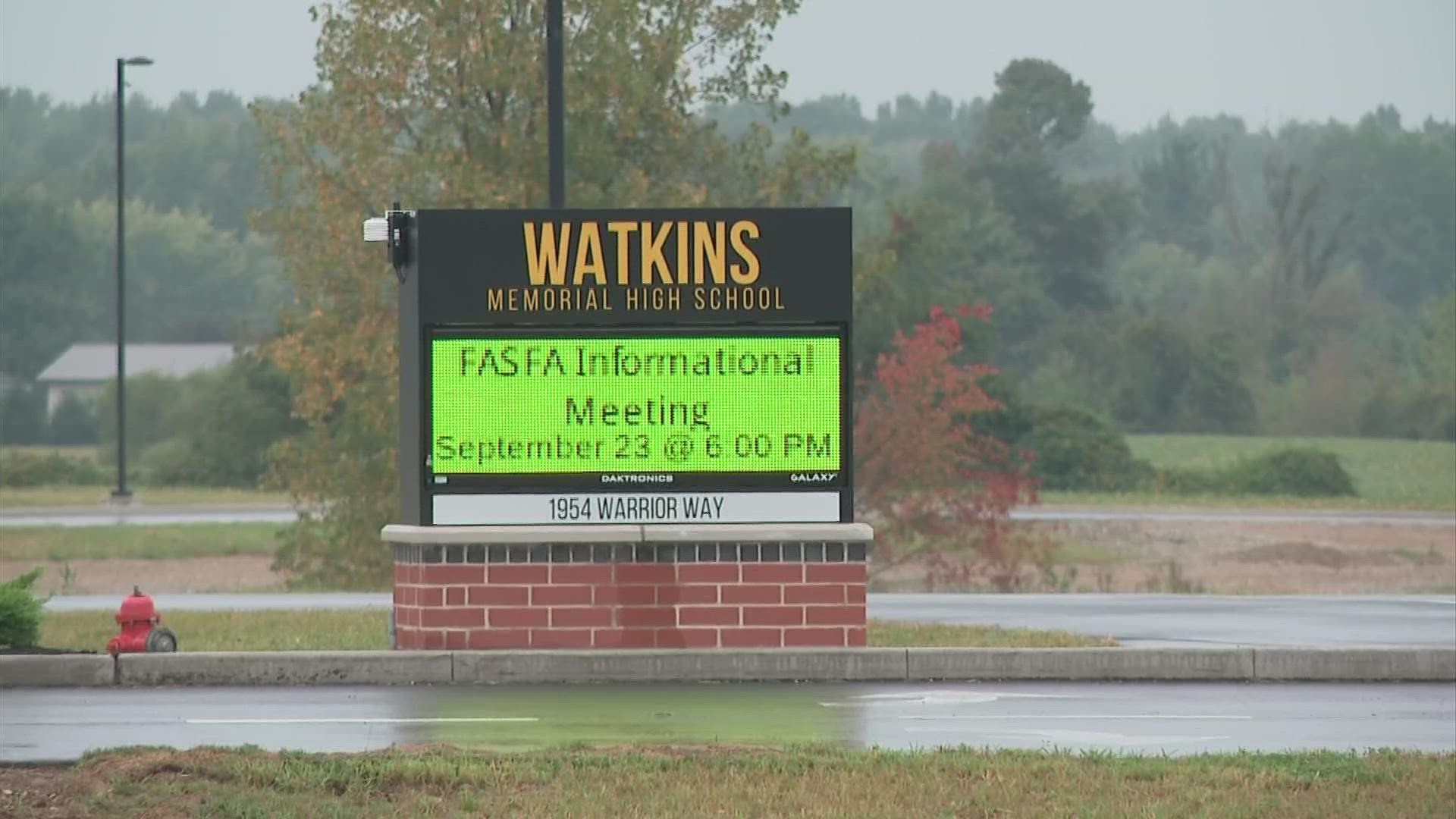 PATASKALA, Ohio — If you have a teenager you might have heard about it.

The popular TikTok videos show students vandalizing and, in some cases, stealing school property. It’s a trend that has made its way to central Ohio and parents aren’t having it.

“It’s something that every parent needs to discuss with their children and tell them this is not OK,” Holly Lash said.

Lash has a freshman at Watkins Memorial High School. Crenshaw has a sophomore. Crenshaw says she remembers the struggles to get the school built.

“And to find out that some kids think it’s a joke this viral TikTok trend to destroy property…it’s very upsetting,” she said.

In 2017, facing major overcrowding issues, the district passed a levy that pumped more than $78 million into the system. The biggest purchase was the new high school. Out of the almost $80 million, the district says taxpayers, to date, have paid almost $30 million.

Tuesday, parents of high schoolers received a notice from principal Melissa Ladowitz saying vandalism, associated with that TikTok trend, is happening from kicking in doors, ripping soap dispensers from the wall and putting them into toilets, twisting faucets to the point of repairs and filling toilets and urinals in the boys restroom with Halloween style fake blood.

Cadwallader moved to the district two months ago with his family for the schools.

“I’m a veteran from the Army and I can tell you what, if you pulled that stuff there you bet you’d be paying for it, if not in jail time,” he said.

Principal Ladowitz says steps have been taken to stop the behavior, like increased staff sweeps of restrooms and limiting restroom use to one student at a time.

“We all have to band together like we did when we passed the levy and we need to teach our children and we need to do whatever it takes,” Lash said. “If it takes one parent going in every hour to volunteer and show these kids we mean business…you [students] have to stop.”

The school district says the calculated dollar amount for maintenance per year is more than $310,000.

Treasurer Richard Jones says the new building comes with a one-year warranty and that the district is not required to pay for repairs related to the construction of the buildings for the first year. He says he was not aware of any cost related to vandalism.

School leaders say students caught will face disciplinary consequences. If the situation does not improve, the school will consider moving to an electronic classroom sign-out system that will track when students are in the hallways.

Hilliard City School District also said they've had several instances happening at their high schools and middle schools due to the TikTok trend. The district said the acts have caused considerable disruption and damage to the school's property.

“The message sent out from the principal outlines the steps being taken to stop the vandalism in the restrooms. As the principal stated, this is due to a TikTok trend that other area schools are also experiencing. I would not say it is on a large scale by any means, however; even one incident is too many in our brand new building. We have an incredible student body and it only takes one or two to try and ruin things for the majority who are really enjoying our new building. With increased steps for safety and security, along with implementing an anonymous See Something, Say Something policy, I believe the high school administration will be able to quickly resolve these issues. Students choosing to vandalize the school will be dealt with according to our discipline policy in our student handbook and will be required to make restitution.  Although it is disappointing that we have students choosing to make poor choices, we cannot allow that to define us or our new school. There are many things news worthy that highlight all of the great things happening at Watkins Memorial on a larger scale than recent bathroom vandals.”

Below is the letter Ladowitz sent to parents about the trend:

"We've seen a disturbing amount of vandalism to restrooms, including kicking in doors, ripping off numerous soap dispensers and putting them into toilets, filling sinks and toilets with paper towels, twisting faucets to the point that they are now stripped and will require repairs, spraying chocolate milk on walls, and filling all toilets and urinals in the boys restroom with Halloween-style fake blood. Some of this behavior is associated with a trend on Instagram and TikTok.

At our grade level meetings with students on the first days of school, we emphasized the importance of treating our building with respect, as it is the result of the dedication and sacrifice of our community members. We have framed our conversations with kids around the notion that this building is a gift to our students and that we (and their community) want kids to have a safe, comfortable learning environment.

Since the vandalism has started, we have taken a number of steps to curb the behavior, including:

Students engaging in vandalism should be aware that we are continuing to increase the frequency of restroom checks and monitoring cameras. In addition, students and families should be aware that when the individuals engaging in vandalism are caught, disciplinary consequences may be accompanied by fees assessed for necessary repairs. As a next step, we will introduce an anonymous reporting system tomorrow during E/I. We are hopeful that this, along with the other efforts we've instituted, will make a difference. If not, we will have to consider moving to an electronic classroom sign-out system that will track when each student is out of the classroom, as we believe the majority of the issues occur during class, rather than during class changes. This new system would be accompanied by restroom checks every class period, which will take staff members away from working with students.

We believe that the most effective way to deal with vandalism is to shift school culture. This school culture conversation is aptly timed, as it coincides with the school spirit focus of yesterday's Can Do U and Homecoming Week.

Families, we need your support in our efforts to eliminate the destruction of our brand new building. Please talk with your student about school spirit, pride, culture, and how fortunate we are to be in such a fantastic space. Our kids deserve to learn in a vandalism-free, well-kept building."

"We expect our community to create responsibly - online and IRL [in real life]. We're removing content and redirecting hashtags & search results to our Community Guidelines to discourage such behavior. Please be kind to your schools & teachers."

We expect our community to create responsibly - online and IRL. We're removing content and redirecting hashtags & search results to our Community Guidelines to discourage such behavior. Please be kind to your schools & teachers. pic.twitter.com/mIFtsYwFRb