'He completed our family': A Down syndrome diagnosis is nothing to fear

Baby Giovanni, who was born with Down syndrome, and the McGhee family were welcomed into the Down Syndrome Association of Central Ohio with open arms. 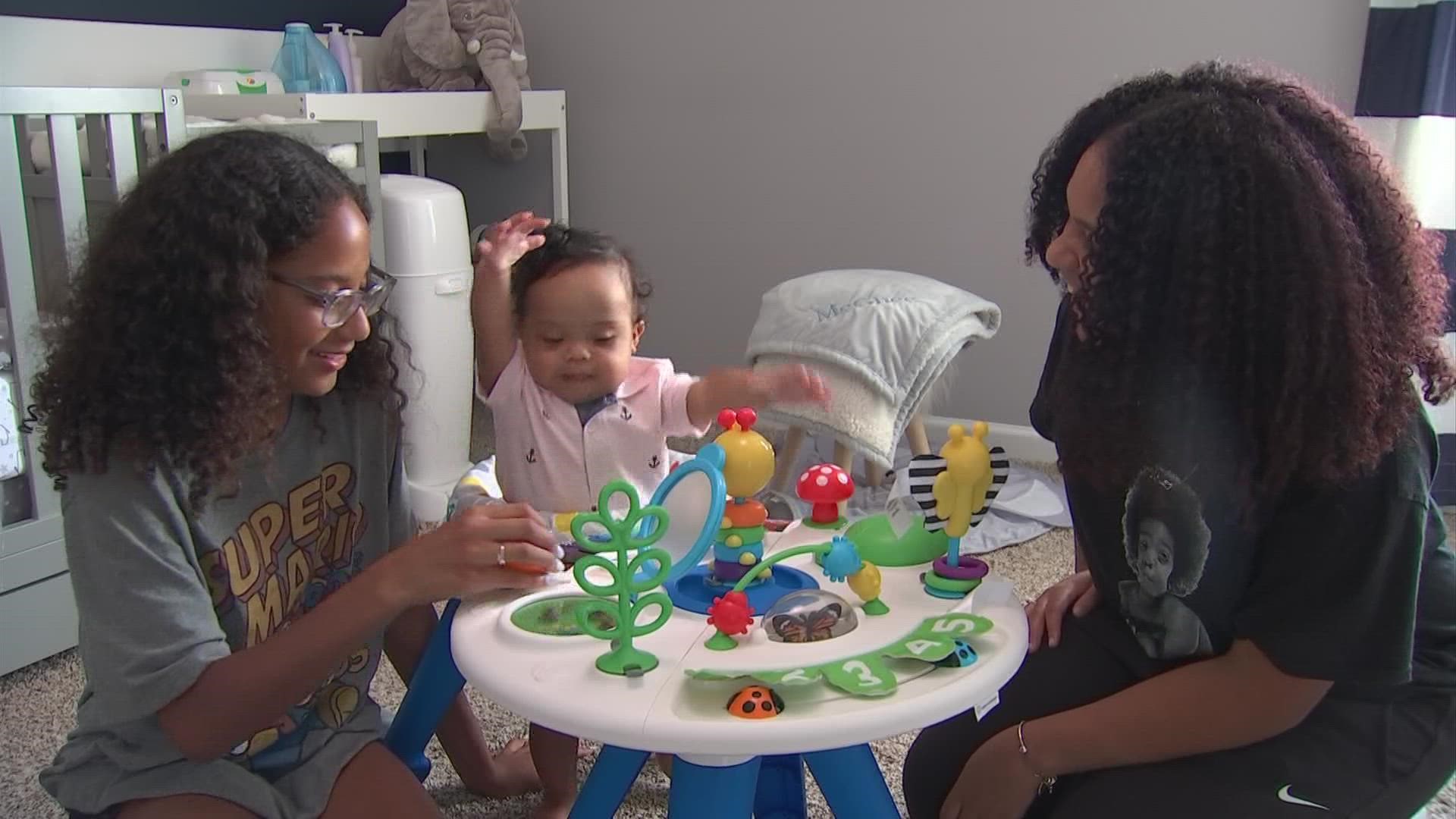 PICKERINGTON, Ohio — Baby Giovanni is usually the center of attention at the McGhee home. His two sisters, 16-year-old Alexandra and 11-year-old Leilani were both surprised and excited when their mom told them she was having another baby.

“It is a really big age difference,” says Alexandra McGhee. “I’m 16 and he’s not even one.” Both girls shared a laugh after that comment. In fact, mom and dad did too. Yes, Giovanni was a bit of a surprise.

When Jenny McGhee was four months pregnant and planning her gender reveal party, she got a call from her doctor.

“I said don’t tell me what the gender is. I thought that’s what he was calling me for,” says Jenny. “That’s when he said 'OK, but I was actually calling to tell you something else'.”

The doctor told her the baby would most likely have Down syndrome. Genetic testing showed Trisomy-21, a genetic disorder caused by an extra copy of chromosome number 21 being in every cell in the body.

“I think at that time I was just sort of numb,” the baby’s father, Josh McGhee, told 10TV.

Jenny and her husband, Josh, were stunned by the diagnosis. They were afraid of what it would mean for their child.

“I would compare it to a grieving process. I mean, it was devastating in the beginning. We didn’t know much about what Down syndrome was,” Jenny says. “I didn’t know what Trisomy 21 meant. I started googling and it was probably not the best thing to do.”

But once Giovanni arrived, all that fear and uncertainty the couple felt was pushed aside. All they could feel now was love.

“It’s one of those things that you don’t realize is a blessing until later on,” says Josh. “We were at the acceptance stage, you know, I wouldn’t choose it any other way stage.”

The McGhee’s were also embraced by a new family. The Down Syndrome Association of Central Ohio (DSACO) family. DSACO provided the McGhee’s with programs, services, and fellowship with others in the Down syndrome community.

“They actually sent us a welcome basket,” Jenny recalls. “I will never forget that. I mean, DSACO has a special place in my heart.”

Once DSACO stepped in, the McGhee family knew they were not alone. Baby Giovanni may have some extra challenges but he’s just like any other baby.

“I told someone my little brother has Down syndrome and they were like, aww poor thing,” says Alexandra. “I told them there’s nothing sad about that at all. He’s literally normal. I don’t see him any different.”

Giovanni was the missing piece of the puzzle they didn’t even know was missing. They say he completed their family.

“I wouldn’t choose a different path for us,” Josh tells 10TV. “This is what we always wanted. This is what we hoped for. He’s a blessing and we’re blessed to be a part of the DSACO family.”

Whether you have Down syndrome, know someone who does, or just want to show your support, DSACO would love to see you at this year’s Buddy Walk.

After a two-year hiatus due to the COVID-19 pandemic, the annual fundraiser is back for 2021.

There will be some changes made to ensure a safe environment for walkers and organizers. You can learn more about the event, COVID-19 precautions, or donate at Columbus Buddy Walk® Columbus 2021 Down Syndrome Association of Central Ohio.

The DSACO Buddy Walk kicks off at 9 a.m. on Oct. 3 at the Fortress in Obetz.