DeWine urged the GOP-led Legislature on Tuesday to pass laws requiring background checks for nearly all gun sales and allowing courts to restrict firearms access for people perceived as threats. 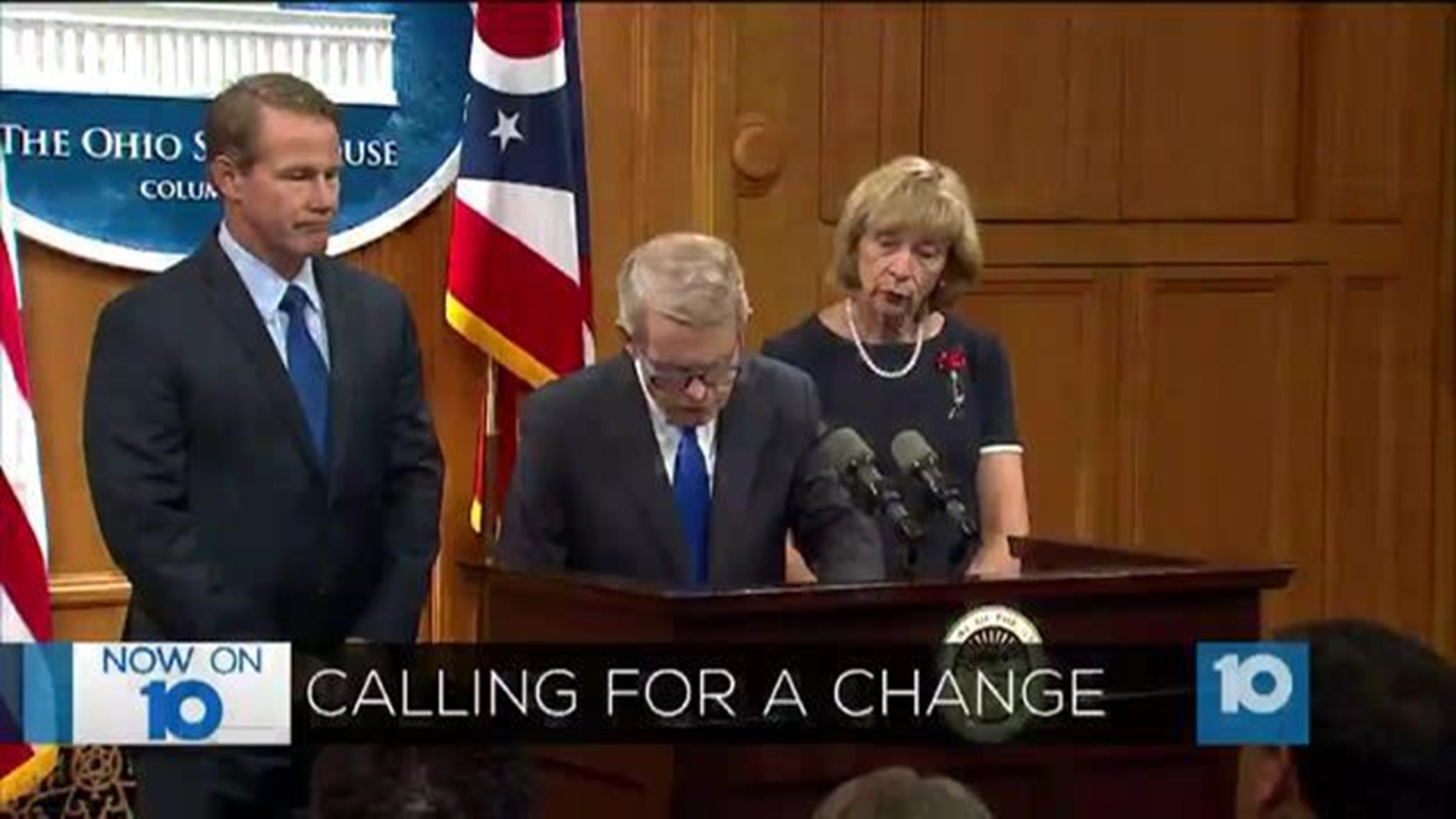 Gov. Mike DeWine said Ohio needs to do more while balancing people's rights to own firearms and have due process. On the heels of Sunday's killing of nine people by a gunman in Dayton's nightclub district, DeWine outlined a series of actions he wants the Legislature to take up to address mental health and gun violence.

"We can come together to do these things to save lives," DeWine said.

Protesters once again shouted "do something" — a refrain chanted during Sunday's vigil honoring the victims — at DeWine at the start of his Tuesday announcement. One person yelled "shame on you" at DeWine while he was answering questions.

His calls for action could be an uphill battle for the Legislature, which has given little consideration this session to those and other gun-safety measures already introduced by Democrats. DeWine's Republican predecessor, John Kasich, also unsuccessfully pushed for a so-called red flag law on restricting firearms for people considered threats.

DeWine said he has talked with legislative leaders and believes his proposals can pass.

Governor DeWine’s proposals include:
*Information provided by the governor's office

Increased Access to Inpatient Psychiatric Care. Over the past several years, Ohio’s state psychiatric hospitals have become predominantly used by patients who are court-ordered there for restoration to competency to stand trial. This week 79% of the adults in our state psychiatric hospitals are under court order. The Ohio Department of Mental Health and Addiction Services (OhioMHAS) is working to create a process where courts and community-based providers can work together to restore competency for those to stand trial in an outpatient setting which will free more hospital beds and decrease wait time for admission. The Ohio General Assembly will need to pass legislation to create this community-based misdemeanor competency restoration process.

Early Intervention. As part of the 2019-2020 biennium operating budget, the state is investing $675 million in wrap-around services for schools to design individualized programs, working with local mental health providers or social service organizations, to address the social and emotional challenges our students face.

Access to Behavioral Health Services. The Ohio Department of Medicaid is investing $15 million in telehealth mental health services to students, so no matter where a child lives, they have access to high-quality mental health care.

Risk Factor and Resource Identification. OhioMHAS will be working with communities to increase knowledge of risk factors, help parents identify when their child is showing warning signs of a mental illness. The department will share screening tools with clinicians and help connect community-based services to link parents, families, and schools with proven supports and strategies to manage a child’s wellness over the child’s lifetime.

Background Checks. Governor DeWine is calling on the Ohio General Assembly to pass a law requiring background checks for all firearms sales in the state of Ohio with certain limited, reasonable exceptions, including gifts between family members.

Increased Penalties for Felons Who Illegally Possess Firearms. Gun violence occurs in neighborhoods and communities every day across Ohio and the nation. Law enforcement reports that the majority of this violence is perpetrated by a relatively small number of individuals who don’t have the right to possess a gun. Governor DeWine is calling on the General Assembly to increase penalties on felons who illegally possess or use guns.

Increased Penalties for Brandishing a Gun. The General Assembly should pass a law that increases the penalty for those who commit a felony while brandishing a firearm to a mandatory three- to five-year sentence.

Increased Penalties for Straw Purchases. So-called “straw” purchases, the act of purchasing guns for or giving guns to another individual are currently illegal under Ohio and federal law. However, this practice is far too common, so Governor DeWine is calling on the General Assembly to increase the penalty for a straw purchase to a second-degree felony punishable by two to eight years in prison.

Increased Penalties for Illegally Obtained Guns. We should increase the penalty for a person who possesses a firearm that they know was obtained through an illegal or fraudulent purchase in order to avoid a federal background check. A person who possesses the gun should be punished in the same manner as a person who bought the firearm, increasing the penalty to a second-degree felony punishable by two- to- eight years in prison.
Increased Penalties for Those Who Improperly Provide Firearms to Minors. Too many kids are carrying guns on the streets often with tragic consequences. Adults who furnish firearms to minors must be held accountable. Governor DeWine proposes that the General Assembly increase the penalty for improperly providing a firearm to a minor to and a third-degree felony punishable by up to three years in prison.

School Tip Line. The DeWine administration is expanding the state’s school safety tip line, where kids and adults can call or text anonymously to 844-723-3764 with tips about potential school violence.

Social Media Monitoring. In a 24-7 world of social media, threats can arise at any time. The Hub at the Ohio Department of Public Safety is expanding their ability to monitor and track potential threats on social media and will share that information with local school and local law enforcement.

School Safety and Intervention Programs. Working closely with Sandy Hook Promise, Ohio’s schools are implementing their “Know the Signs” safety program across the state. This program equips school staff with knowledge and skills to identify potential threats of violent action and take steps to intervene. There are 23 training dates already scheduled.

“I believe these proposals fulfill three important requirements. They can pass the legislature, they make meaningful progress toward safer communities, and they are Constitutional. Passing them won’t be easy, but this is the right thing to do and this is the right time to do it,” Governor DeWine added. “We can pull together to do meaningful things to protect lives. It won’t be easy, but I believe in this state, and I believe in our people.”

The Buckeye Firearms Association has mixed feelings about the governor's ideas.

"Extending background checks aren't going to have any effect on gun violence they haven't in the past and they are not going to in the future," said Gerard Valentino, Secretary for Buckeye Firearms Association.

Laura Robertson-Boyd Represents the Columbus chapter of Mom's Demand Gun Sense in America. She liked the governor's plan but wished he would encourage lawmakers to pass a safe gun storage rule.

"It is sitting in committee and hasn't had a hearing yet we'd love to see safe storage around kids," she said.