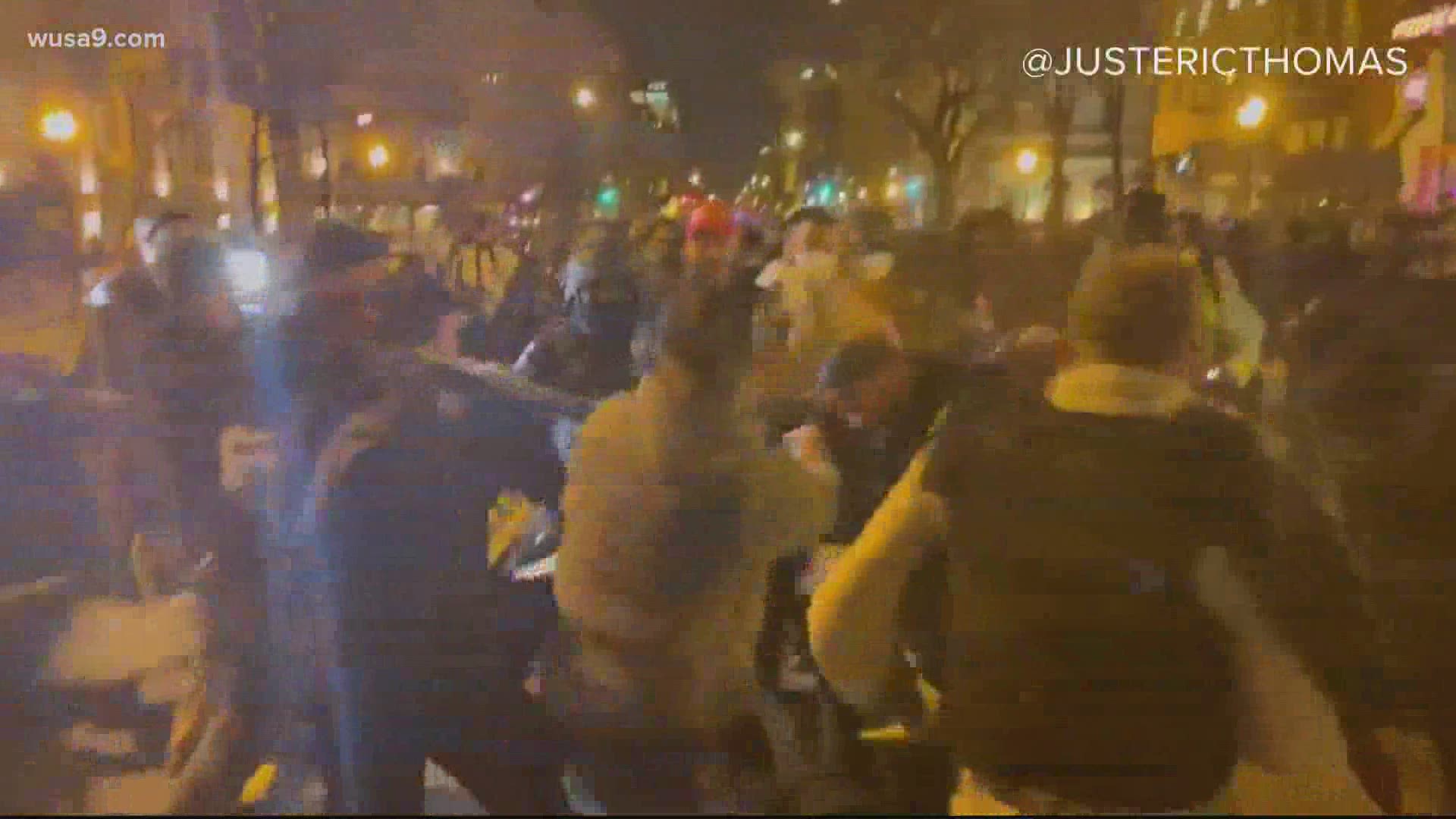 WASHINGTON — Clashes with police, and confrontations between Trump supporters and counter-protesters, were seen Saturday after the second Million MAGA March to be put on in D.C. since November's election results.

There were 33 "un-related" arrests, four people were stabbed at the intersection of 11th Street and F Street in downtown D.C. near Black Lives Matter Plaza and eight officers were injured in connection to the demonstrations, D.C. Police said Sunday.

All four stabbing victims were transported to an area hospital, conscious and breathing, for treatment of non-life-threatening injuries, according to D.C. Police.

One officer was seriously injured and had multiple lacerations on his face after he was hit with an unknown object, D.C. Police Chief Peter Newsham said at a news conference on Monday morning.

Per the Metropolitan Police Department, the arrests included the following:

• One Assault with a Deadly Weapon
• 10 Assaults on a Police Officer
• 11 Simple Assaults
• Six Disorderly Conduct Incidents
• Two Weapons Violations - Possession of Prohibited Weapon
• Two Release Violations - (One out-of-state Failure To Appear; One was a Fugitive of Justice)
• One Resisting Arrest

Newsham said the arrests were 26 men and seven women. The majority of the arrests, 14 of them, were from states outside of the D.C., Maryland and Virginia area.

Both Trump supporters and counter-protesters were in the area of Freedom Plaza and Black Lives Matter Plaza.

Both Antifa and Proud Boys have been spotted, according to videos from Eric Thomas on Twitter.

Black Lives Matter banners have been burned and damaged by the Proud Boys, according to Thomas' tweets.

"Whenever someone attacks a place of worship it's unsettling for all of us," Newsham said.

WUSA9 nor the Metropolitan Police Department has been able to independently confirm which groups are clashing in the streets of DC.

multiple fights break out between #antifa and the Proud Boys as the two groups meet. Cops try to intervene as pepper spray is shot into the crowd. #BlackLivesMatter #MarchForTrump pic.twitter.com/5gykrpzQcN

Videos from both our WUSA9 staff and viewers have shown the tense scenes downtown.

Some of the videos showed that DC Police had to separate protesters and engaged directly with demonstrators during the gatherings in Washington.

A similar video from Eric Thomas also shows DC Police having water and smoke thrown at them, before a clash with what the Tweet labels "ANTIFA."

#antifa clash with MPD as they push the police line back. after numerous objects are thrown at officers they advance towards protestors where things get intense. #MarchForTrump #BlackLivesMatter pic.twitter.com/gsYq2CwRVM

Some demonstrators just pushed @DCPoliceDept back along I street, and then threw some kind of smoke-emitting substance as well as water bottles at them.

According to the march's website, around 17,000 supporters said they'd be in attendance for the held Saturday.

By noon on Saturday, WUSA9's Mike Valerio reported crowds at Freedom Plaza, who had gathered in support of Trump's unfounded claims of fraud in the 2020 election, were sparse, down sharply from the crowds seen last month.

Five people were put in DC Police custody ahead of the second Million MAGA March on Saturday, officials confirmed.

Ahead of this weekend's march, D.C. officials announced several road and street closures along with parking restrictions.