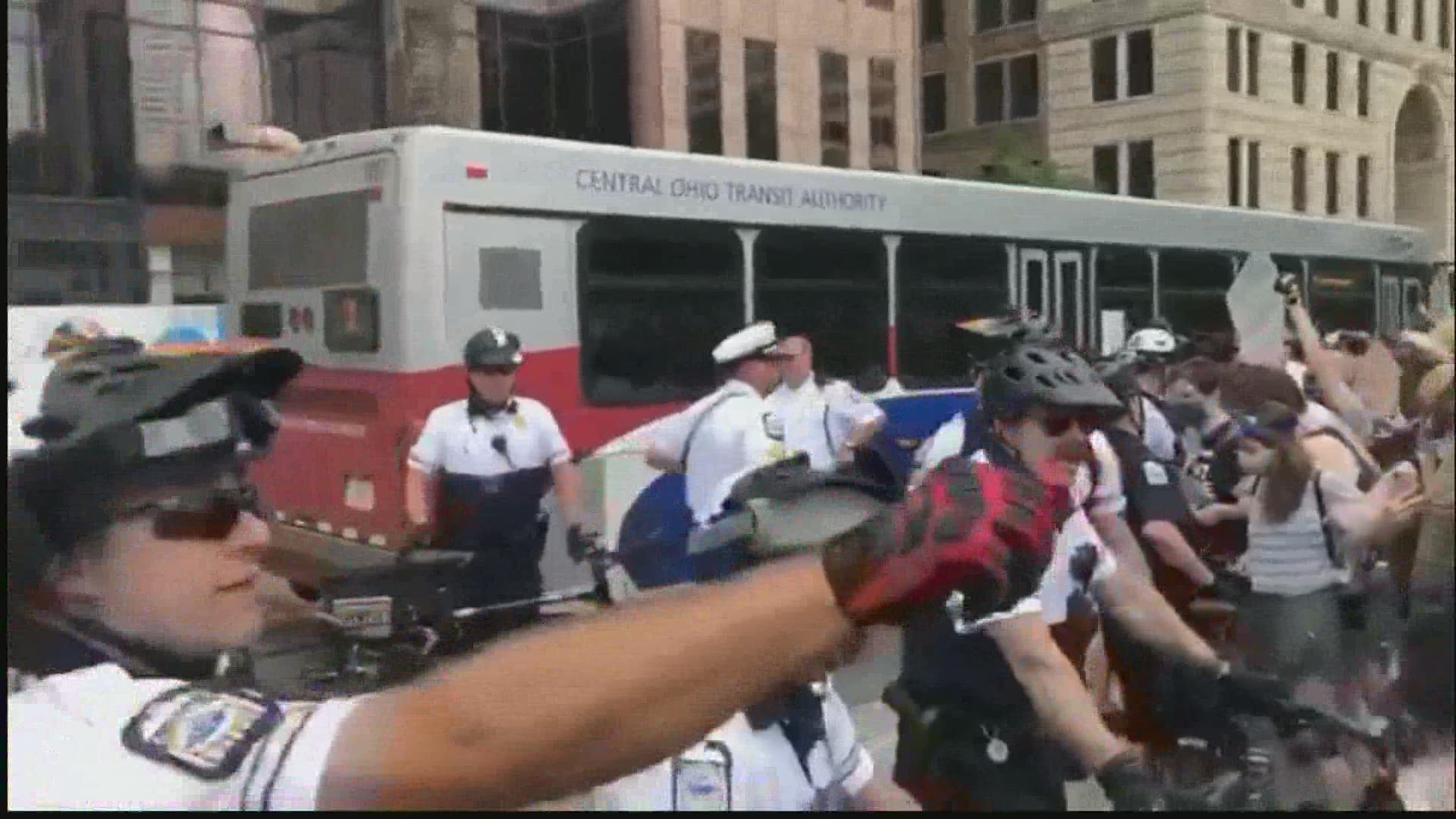 COLUMBUS, Ohio — Protesters gathered near the Statehouse Sunday afternoon and some marched around downtown Columbus.

Police officers could be seen near the Statehouse in protective gear.

Part of the group marched in the road to the area of 3rd Street and Fulton Street, where they blocked the intersection with construction barriers.

That group then moved closer to the main downtown area.

Protesters have gathered near the Statehouse and some have marched around downtown Columbus, including up to the area of Fulton Street and 3rd Street where they took construction barriers to block off the road.

Columbus police Sgt. James Fuqua gave an update on the police response to the protests over the last couple of days.

Sgt. Fuqua says there were multiple calls of shots fired, fires and assaults on police officers in the last couple of days.

Sgt. Fuqua says that officers respect the right for peaceful protests but it cannot happen in the middle of the street.

One protester, 26-year-old Douglas Darren Herring III, was arrested for throwing a rental scooter at an officer. The officer was able to get out of the way of the scooter.

Columbus Mayor Andrew Ginther said in an e-mailed statement from a spokesperson on Sunday, "We have been clear about respecting and protecting peaceful protest. We also must keep city streets open to the public to travel and protect residents from lawlessness including the drag racing, fires and injuries in recent nights. Increased enforcement today has been necessary to clear the right of way. Officers instructed people downtown to keep protests to the sidewalks and out of streets for more than an hour. As police tried to clear streets, they were met with violence from some and took action, including using mace and pepper spray as appropriate to keep crowds on sidewalks. I will reiterate again that we respect and encourage peaceful protest, but aggressive acts that put police and protesters in danger cannot be tolerated."

People in Columbus and across the country have been protesting racial injustice after the death of George Floyd in Minneapolis after a police officer kneeled on Floyd's neck.

The Fraternal Order of Police Capital City Lodge #9 President Keith Ferrell said in a statement on Sunday, "These activities have been going on for too long and it started the first Thursday night when the statehouse and businesses were vandalized. When you are damaging or looting businesses and impeding the rights of others you are not engaged in a peaceful protest. We have spoke out against this from the beginning. We have also supported peaceful and lawful protests and it is unfortunate that these criminals have taken away your ability to voice your opinion. It is time for the mayor and other elected officials along with the citizens of Columbus to demand that this is stopped before someone gets seriously hurt."

Columbus city leaders: There is no ‘stand down’ order for police