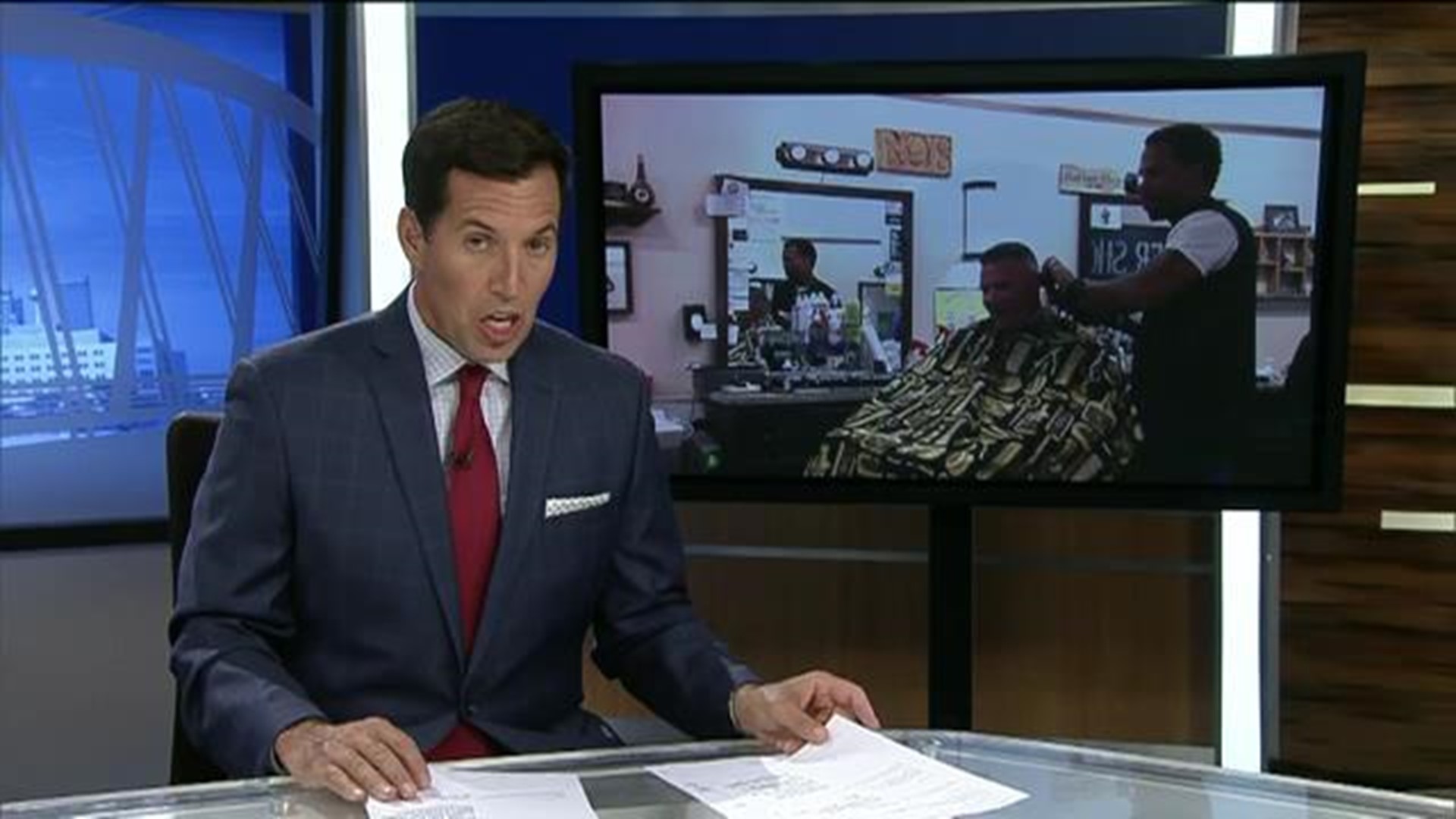 Inside, barber Robert Cayson has been cutting hair for six years.

"I'm happy I got into it, I think it was my calling," he said of cutting hair. "I think God had a better plan for me and this was it."

A better plan. A better story — different from what was originally written.

"I just got myself involved in some negativity up there and had to go and do a little time," he said.

And by a little time, he means six years in prison.

"Drug conviction and guns," he said.

Back then, his opinions of those who wore the badge wasn't good.

"That they were all against me," he said. "But, really, they were just doing their job."

It's what makes the customer in his barber's chair, Friday, unlikely.

Pete Casuccio has been an officer with Columbus Police six years. In the barber's chair is where they first met.

"This is ground zero," Casuccio joked.

"This is ground zero," Cayson repeated.

If the story ended here, with an unlikely friendship, no one would be upset. But that's just the beginning.

"I think Pete is an amazing person," Cayson said. "He's no other. He's like no other to me."

But this story isn't even really about them.

"I think Rob and I both have kind of a see-a-need, fill-a-need philosophy to life," Casuccio said. "A lot of these kids are up against things that most central Ohioans can't even comprehend."

It started last year with a question.

"He came in one day and I asked him if he had any kids that I can [give a haircut] for back to school," Cayson said. "And, he jumped right on it."

Casuccio patrols in Linden. He sees the need. The poverty. He sees children going to bed hungry and the houses with no running water or electricity. He also sees the best way to guide children away from being a product of their environment is to get to them early.

Last October, Casuccio had a confrontation with two children who had been holding a BB gun.

He says, to this day, that outcome could have been very different.

"Darn close," he said. "That would be the best way to describe it. Like real, real close."

Instead of pulling the trigger, Casuccio pushed a conversation.

"This is getting kids killed all over the country," he said in the video to the two boys.

He says the video has been viewed more than 73 million times on social media.

In his area, he found 20 children for Cayson's request for the first Cops and Barbers in 2018.

"Twenty kids later, 20 happy kids later and that's how it came to be," Cayson said.

Cayson provided the cuts, Casuccio provided the back-to-school supplies. This year, with AEP Ohio footing the bill, the duo is gearing up to help 20 times that many children.

This year's event, hosted by The Starfish Assignment and sponsored by AEP Ohio, will be Sunday Aug. 18 and Monday Aug. 19. Sunday's two locations will be at the Gladden Community House from 12:00 p.m. to 5:00 p.m. and the Adams Community Center on the east side during the same time.

Gladden Community House is located at 183 Hawkes Avenue in Columbus and the Adams Community Center is at 854 Alton Avenue.

Reeb Center is located at 280 Reeb Avenue in Columbus and St. Stephens is at 1500 East 17th Avenue.

On these days, seven barbers will be cutting boys' hair every 20 minutes. Girls will have crafts with officers. In total, about 500 boys will receive haircuts and about 1,000 children will receive back-to-school supplies.

"Yeah," Cayson said, laughing. "That's what we call each other."