The law firm BakerHostetler was contracted by the city to review claims of misuses of force by police during protests in downtown Columbus. 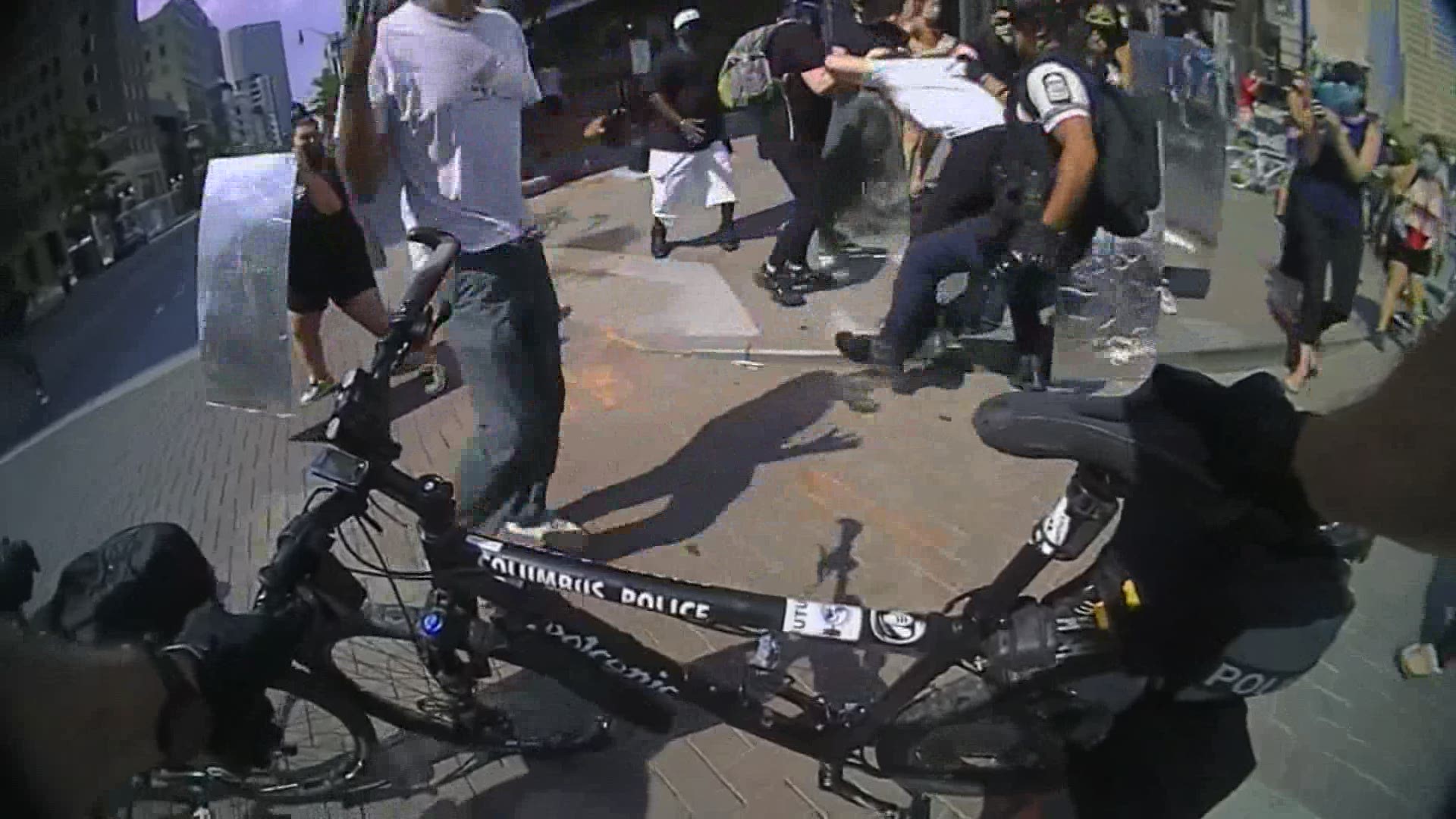 COLUMBUS, Ohio — A law firm investigating possible misconduct by Columbus police officers during the protests earlier this year found there were “challenges” in investigating these cases - ultimately ruling that the majority of the incidents “were not sustained” - meaning the allegations against the officers could not be proven or disproven.

Based on the investigation by law firm, Baker Hostetler, one allegation against a Columbus police officer was sustained.

Investigation into police actions during protests

Mayor Andrew Ginther announces the findings of a months-long investigation into police actions during protests in downtown Columbus // https://bit.ly/2ZEVYma

The law firm investigating the incidents says there were challenges in looking into these because many officers could not be identified.

As a result, Mayor Andrew Ginther set up a hotline to take complaints outside the police chain of command and have them investigated independently.

BakerHostetler was contracted by the city to review the claims. Ginther says 32 reports against officers were sent to them to be investigated for actions outside of division policy.

On Tuesday, BakerHostetler announced there were cases where they couldn't prove or disprove the allegation.

BakerHostetler said in nearly every case where an allegation was "not sustained" they could not identify the officers because of riot gear covering badge numbers and names and not every officer had a body camera.

As a result of their investigation, BakerHostetler said they have exonerated four officers, sustained an allegation against one officer, nine complaints were unfounded and 25 were "not sustained", meaning they couldn't prove or disprove them.

Additionally, the firm said officers are required to submit a use of force reports but many did not submit one over the first weekend of protests.

BakerHosteler said they contacted 95 citizens over complaints but only 35 agreed to be interviewed. They also reviewed hours of video and interviewed 90 officers.

Based on the Fraternal Order of Police's union contract with the city, the firm had 90-days to complete its investigation.

BakerHostetler said this deadline posed a challenge saying the FOP denied requests to extend the deadline.

Ginther said while some claims were not sustained, it did not exonerate them. He then continued to discuss his desire to create a civilian review board saying, “we believe police cannot investigate themselves.”

Columbus Division of Police Chief Thomas Quinlan said he was proud of officers for reporting for duty during the protests and 200 were injured during the demonstrations.

Quinlan said he fully supported the city's decision to hire an outside law firm to review the incidents. He added that he has ordered SWAT officers to wear body cameras.

The mayor says 21 incidents stemming from the protests were sent to a former FBI agent to be reviewed for "potential criminal charges."

Statement from the Fraternal Order of Police Capital City Lodge #9:

"We have always been willing to sit down, talk and work with people who are willilng to work with us. We are doing that right now with elected and community leaders. Recently, we collaborated witht he City of Reynoldsburg to create a citizen's review board. Mayor Ginther wasted $550,000 on a no-bid contract that could have been better spent safeguarding our community. Mayor Ginther continues to mismanage this situation. The inability to lead and unite has resulted in a city filled with chaos and crime. Furthermore his attacks on the women and men in blue continues to embolden the criminal element and divide our community."

“I am frustrated and disagree with the initial report and the fact that so few officers can be held accountable for their overt and unnecessary use of force. Once again in America, officers who acted in broad daylight with violence against unarmed civilians get a pass. The fact that so few complaints are being sustained is a damning indictment of the system of oversight, reinforcing the lack of faith black residents have in the system. It is clear Columbus must create an independent Citizen Review Board that has subpoena power to get to the facts and improve accountability for law enforcement.”