Faith Cahill, 4, suffered a broken collarbone and bruises after falling several feet from a festival ride on Sunday. 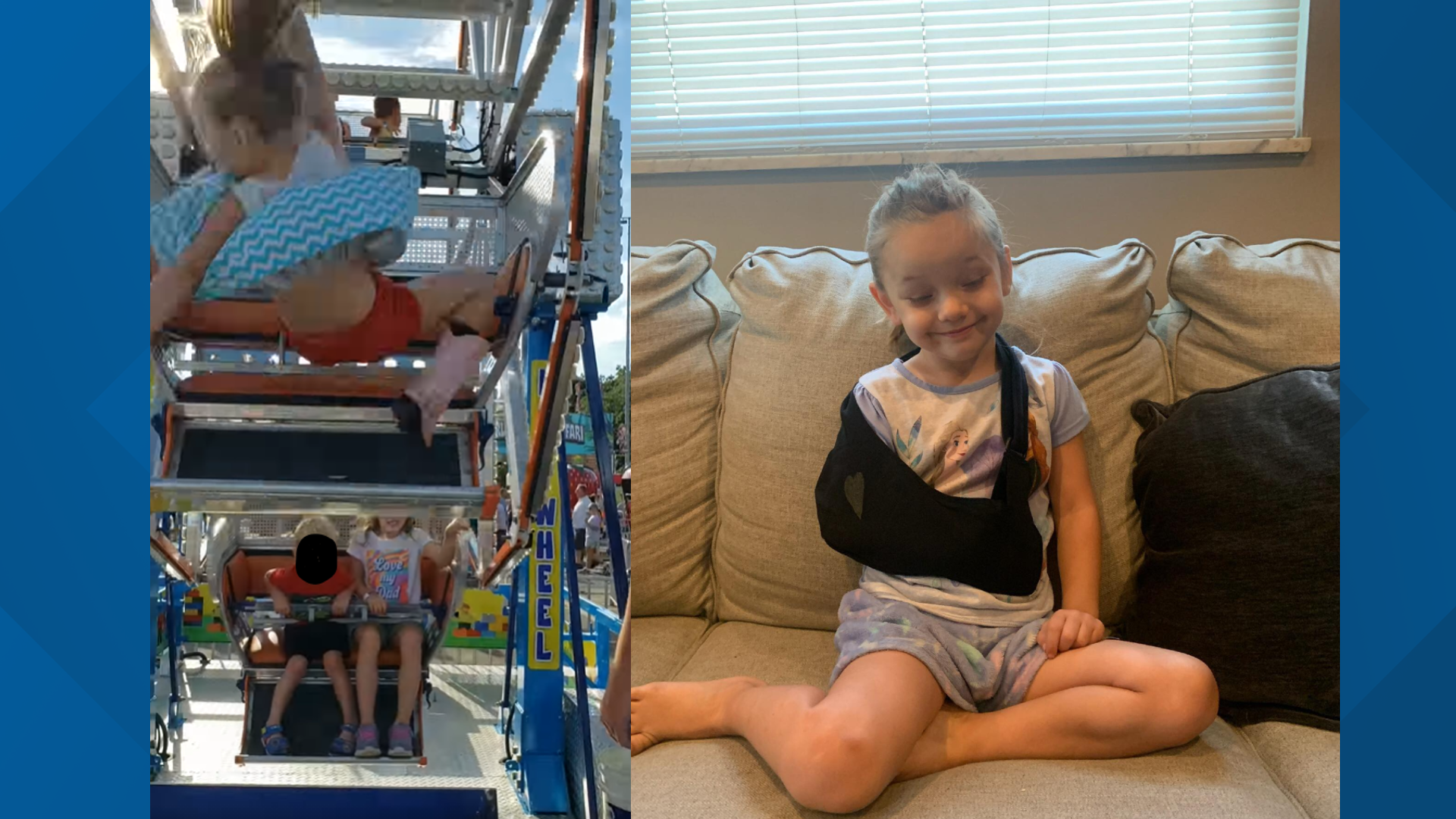 OBETZ, Ohio — Cell phone video taken this past Sunday at Zucchinifest in Obetz shows children on a kiddie ride.

Faith Cahill, 4, was sitting on one cart while her 5-year-old cousin Dylan sat beside her.

In mere seconds everything changed.

The video, which was taken by another parent, shows Faith fall several feet to the ride’s platform. Faith can be heard crying hysterically as her aunt Brett ran to comfort her.

“That was horrible,” Brett Cahill said. “Horrifying watching that all happen.”

“We’re lucky Faith’s with us today,” Rosie said. “This needs to be taken a lot more seriously.”

According to Russell Clements, the Lil Wheel is ran by his company Triple Treat Shows. According to Brett, Clements came over to help and directed them to the paramedic tent where Faith was looked over and released.

The family says an ambulance or a hospital visit was never offered to Faith.

“It was never offered,” Rosie said. “They just said that they felt like she was OK, she was moving her arm.”

Clements filled out an incident report saying Faith had fallen “about three feet” and had a bruise and a knot on her right arm. Wednesday, Clements told 10TV the ride was inspected prior to anyone riding it Sunday and, following the incident, it was checked again.

“He’s pulling on the bar and he couldn’t get it to move and he was 205 pounds and it wasn’t moving with him jerking on it,” Rosie said.

Clements says he could not “find or recreate the same failure” concerning the lap bar coming unlatched. The operator, he says, has been with his company all season for the past few months and safety is a top priority.

“I asked him if my daughter was able to reach around to unlatch the bar by herself and he said no and he showed me where it was,” Rosie said. “Yeah, there’s no way my daughter could have reached.”

The Cahills say an hour after the fall they took Faith to an urgent care where, again, it was nothing more than cuts and bruises and a swollen arm. Two days later, they say Faith wasn’t acting like herself. Another doctor’s visit and an X-Ray revealed she had a broken collarbone.

The Cahills are upset knowing this incident was never reported to the Ohio Department of Agriculture.

“The man who owned the ride never sent a report, but he never had to send a report,” Rosie said.

Back in June, 10TV showcased “Tyler’s Law” and how the new state law changed safety measures and standards for amusement rides, in partnership with the Ohio Department of Agriculture, after Tyler Jarrell died in 2017 while riding a ride at the state fair that broke apart.

“We thought there was no loop holes with anything,” Rosie said. “We thought this new law…things had to be reported and it looks like it doesn’t.”

The accident report form on ODA’s website, which was in place before Tyler’s Law, defines “accident” as happening during the operation of a ride, which results in death or an injury requiring hospital admission.

Because Faith was never admitted, the incident was never reported.

“The medical evidence is there whether she went by squad or went after by us taking her,” Brett said. “Like, had we known what the protocols were we would’ve followed them. But, us being the general public, we don’t know the laws around this.”

ODA confirms it is talking with Faith’s family and it is investigating to see if the ride was operated safely and properly. It also says the Lil Wheel passed its inspection prior to the Zucchinifest and is properly permitted. The Cahills say the ride was operating no more than 30 minutes after Faith’s incident.

“And I looked back [as we were leaving] and the ride was started back up,” Rosie said. “They were loading kids on it.”

The Cahills say more needs to be done for all incidents to be reported for the safety and well-being of all Ohioans.

Clements says he was unaware of the extent of Faith’s injuries until he was contacted by 10TV, Wednesday. He says had he known he would have reported the incident to ODA immediately.

The Ohio Department of Agriculture provided this statement, Wednesday:

"The Ohio Department of Agriculture takes amusement ride safety very seriously. To reiterate a few key points that we discussed on the phone:

Because the incident at the Zucchini Fest did not result in immediate hospital admission, it did not meet the requirement in Ohio law that the ride operator immediately notify ODA of the incident. ODA did, however, receive a citizen complaint on Labor Day and our team spoke with the girl’s family about their concerns that day and on subsequent occasions. Our Amusement Ride Safety Division and our Enforcement Division are now investigating the incident to determine if the ride was operated in an unsafe manner and if the incident was handled properly at the time it occurred. The Lil Wheel passed its inspection prior to the Zucchini Fest this year and is properly permitted."