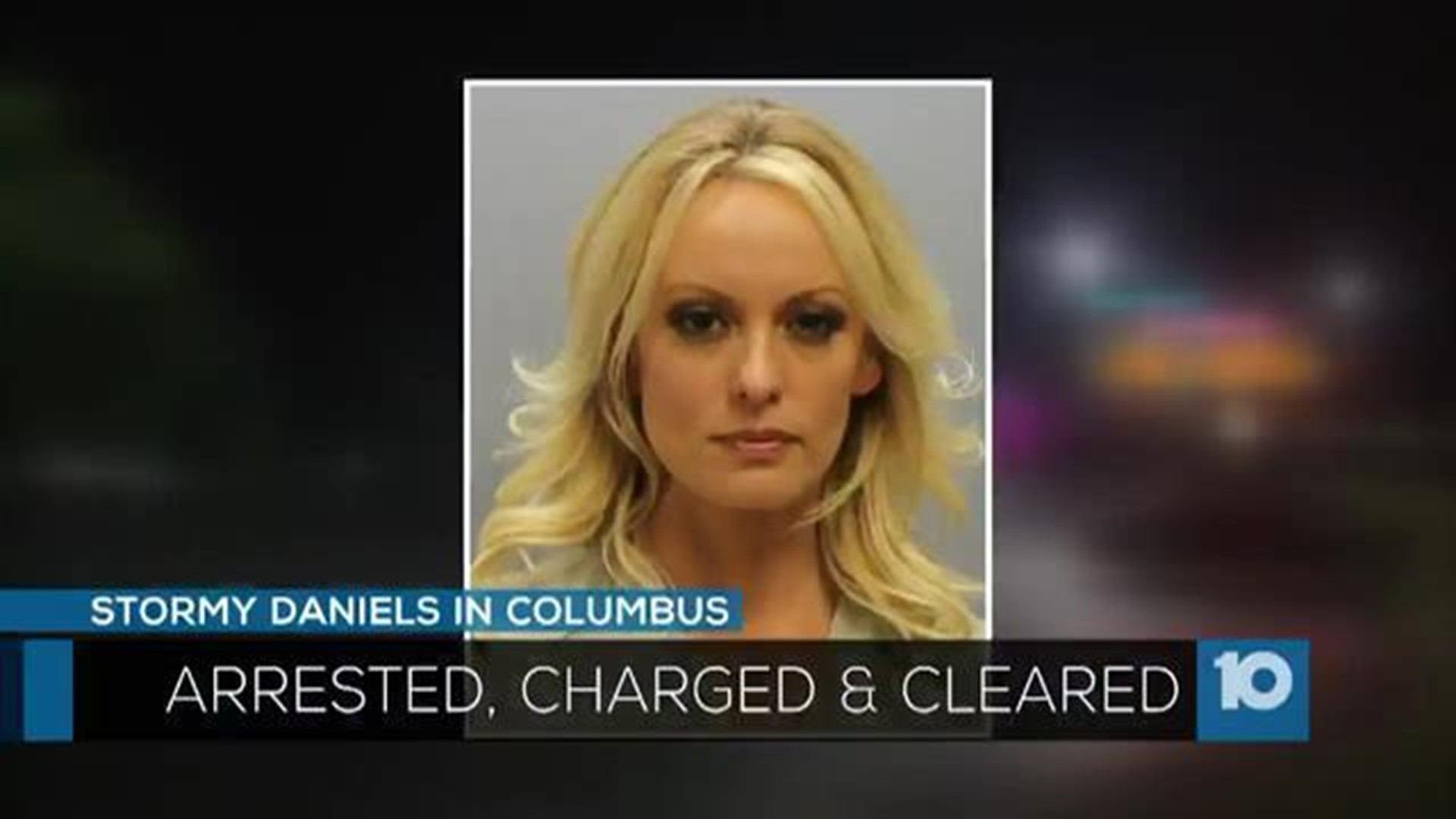 Her attorney said she was set up in a Columbus police sting operation, something police deny.

Charging documents say Daniels, whose real name is Stephanie Clifford, was arrested for touching a patron at a "sexually oriented" business in violation of the law commonly known as the Community Defense Act.

I am pleased to report that the charges against my client @stormydaniels have been dismissed in their entirety (below motion was just granted). I want to thank Joe Gibson & his colleagues at the prosecutors ofc for their professionalism starting with our first call early this am. pic.twitter.com/xHPSWsyqM2

The documents said that Daniels, who was semi-nude, allegedly touched some of the patrons' breasts and allowed them to touch her. She allegedly performed the same act with several officers who approached the stage and forced one officer's head into her bare chest.

The charges relate to the law prohibiting dancers from touching customers and customers touching dancers — excluding immediate family members. The arrest followed a performance Wednesday night at Sirens, a strip club in Columbus.

Daniels' attorney, Michael Avenatti, told The Associated Press that some patrons touched Daniels in a "non-sexual" way during her performance.

He told MSNBC later Thursday that police had prepared a sting operation with multiple officers. He said female undercover officers asked Daniels if they could place their face between her breasts.

"It was an absurd use of law enforcement resources," Avenatti said.

The three counts against Daniels were first-degree misdemeanors, with a maximum penalty for one count would be six months in jail and a $1,000 fine.

Thursday afternoon, city prosecutors dropped the charges, saying the Ohio illegal touching law can't be enforced because Daniels has only appeared once at the Columbus club.

The law refers to someone "who regularly appears nude or seminude" at a club. Avenatti successfully argued Daniels "has not appeared consistently and repeatedly at Sirens," according to prosecutors.

Police said two other women were arrested along with Daniels. Prosecutors are also checking whether those women will be prosecuted, said City Attorney Zach Klein.

Columbus police said Thursday that Daniels' arrest was part of a long-term human trafficking investigation of illegal activity at city adult clubs. They say they've made numerous arrests under the law regarding illegal sexually oriented activity in a sexually oriented business, but did not immediately provide a number.

Daniels's whereabouts were unclear. Her attorney said earlier in the day she planned to leave the state Thursday.

Avenatti posted on Twitter a statement by Daniels that said she apologized to her fans in Columbus, but she would not perform her previously scheduled Thursday night show.

A person who answered the phone at the strip club declined to comment.

Daniels has said she had sex with President Donald Trump in 2006, when he was married, which Trump has denied. She's suing Trump and his former longtime personal attorney, Michael Cohen, and seeking to invalidate a nondisclosure agreement she signed days before the 2016 presidential election.

The general manager at Vanity Gentlemen's Club said Daniels will perform there Thursday night after canceling her second show at Sirens.

"My office has reviewed the charges filed by the Columbus Division of Police, and I’ve determined that these crimes were not committed, based on the fact that Ms. Clifford has not made regular appearances at this establishment as required under the law. We’ll do the same inquiry for the other defendants involved, as well. My office was not involved in this sting operation, so any additional questions about it must be directed to the Columbus Division of Police. The charges have been dismissed.”