It's important to acknowledge the different paths both the Asian community and the Black community have traveled along the road of discrimination. 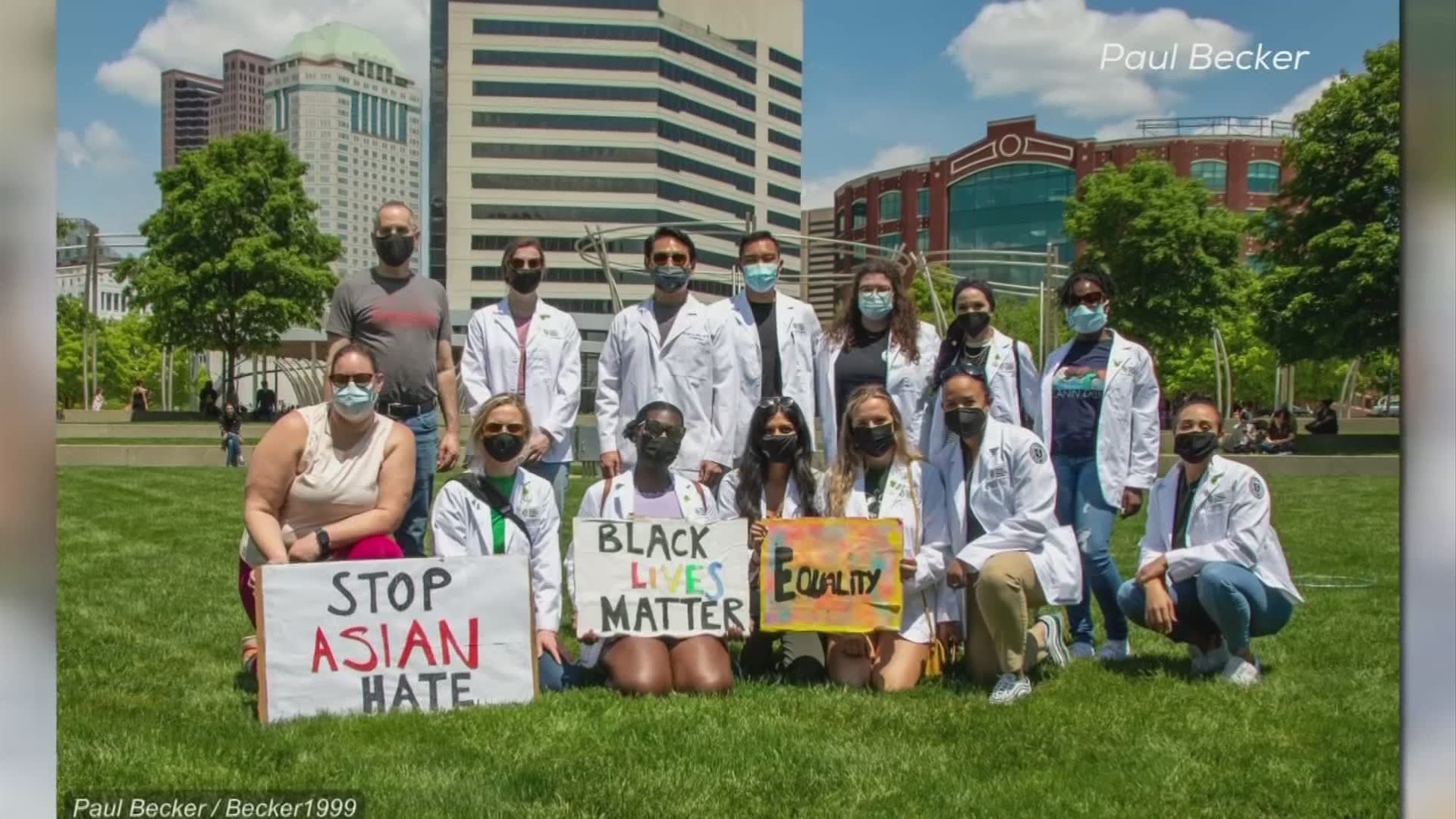 COLUMBUS, Ohio — In 2020, the murder of George Floyd at the hands of a former Minneapolis police officer sparked national outrage.

The Black Lives Matter movement gained steam in the fight for justice.

Throughout the course of the pandemic, hate speech and attacks on the Asian community have risen, leading to the start of the #StopAsianHate movement.

While both movements stem from individual histories of discrimination, some people in central Ohio view this current tumultuous time as an opportunity to grow together.

One example of that was the Solidarity: Ohio Against Hate rally held on May 16.

“There were a lot of different groups being represented that were representing different elements of Columbus, showing support for the community, yet all these different groups are also dealing with their own issues of discrimination and violence, so I think it’s really great when we see that collaboration,” said Paul Becker, an associate professor of sociology at the University of Dayton.

Becker saw the rally through the lens of his camera as he captured the events of the day.

“There’s a lot of great work being done by activists in the city and I try to help document that,” he said.

Becker told 10TV that while he can’t necessarily understand the discrimination some of these marginalized groups face, he goes in support to capture the experience.

It’s an experience that rally organizer Nidhi Satiani believes is different for everyone.

“I’m not trying to make this into some kind of giant melting pot, right?" Satiani said. “That’s not it. We don’t all have the same desired outcomes but I think it is important for us to stand together and say, ‘Hate doesn’t belong here.’ We all have a right to feel safe in our own communities.”

10TV took that idea to Steve Francis, president and lead strategist for D&I Solutions, which offers diversity and inclusion strategies to their clients.

“I don’t want to confuse people that we’re all in the same bucket,” Francis said.

Francis believes it’s important to acknowledge the different paths both the Asian community and the Black community have traveled along the road of discrimination.

“The stereotypical idea image of American is white and so anything other than white, particularly with Asians – they’re considered foreigners. 'Where are you from? You’re not from here,' and Blacks are considered less than because of the Three-Fifths Compromise and things like that that have been in the constitution over our history,” he said.

But in the face of injustice, Francis has this to say: “It’s important for us to band together,” he said. “You know, Martin Luther King said, ‘Injustice anywhere is a threat to justice everywhere.’”

Banding together, Satiani explained, for a better community.

“As Ohioans, we are all equally welcome here; we are all valued members of the community and we stand with each other, for each other,” she said.

Also at the solidarity event was the Columbus Museum of Art.

In an effort to use art to encourage and inspire, people at the rally were encouraged to help build a Wish Tree.

The tree, started by Yoko Ono, is made up of wishes written down on pieces of paper and hung on the branches, bringing life to their words.

That tree is now on display at the Columbus Museum of Art. Learn how to build your own by clicking here.