"It's been overwhelming... honestly speechless. It's crazy. I didn't think it would ever get this big," said Jason King who bought Rudolph's gloves on eBay. 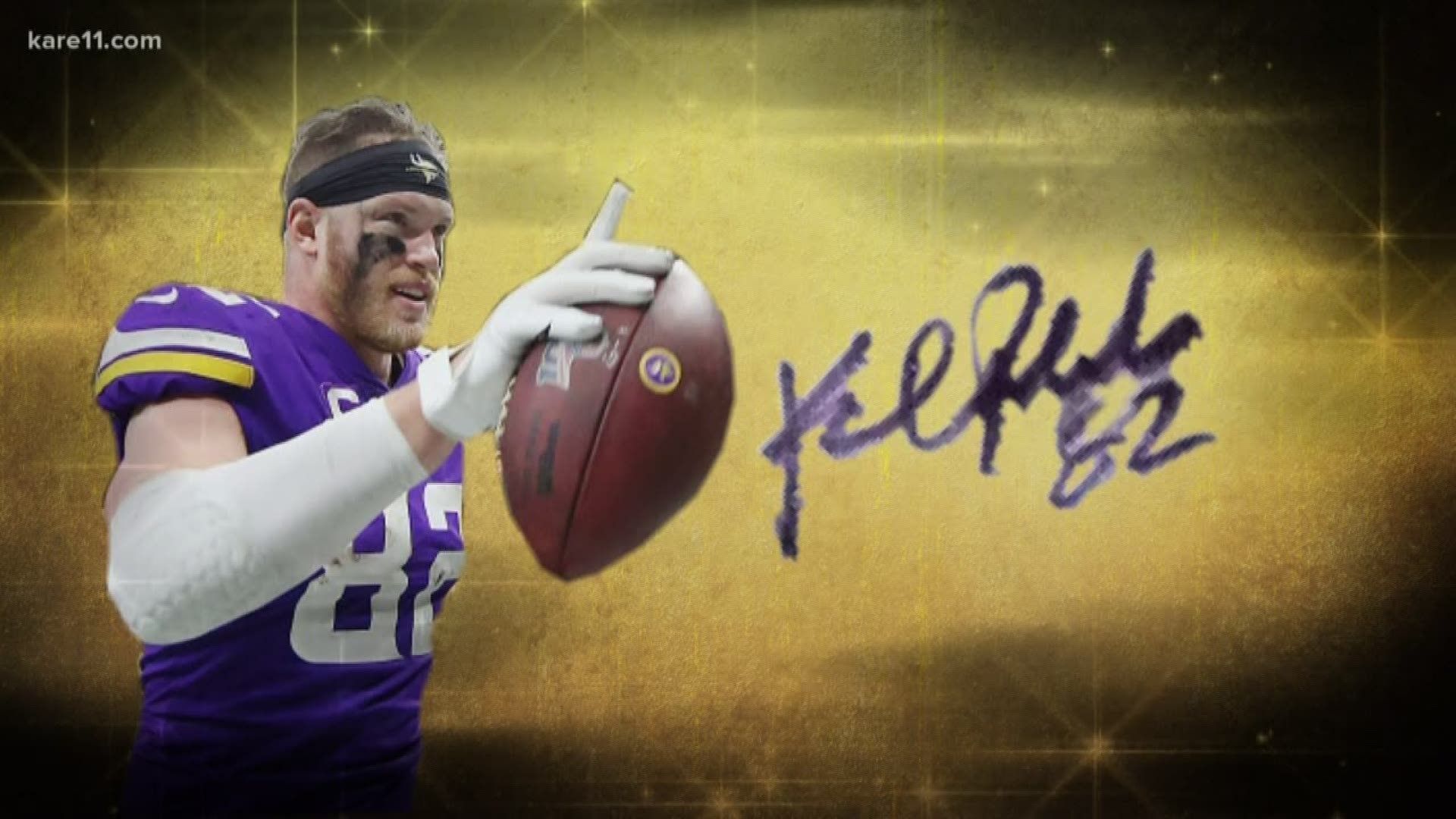 MINNEAPOLIS, Minnesota — There's a happy ending to the story of how Kyle Rudolph thought he was donating his game-winning gloves to charity, only to find them sold on eBay.

It all started on Sunday when Rudolph caught that game-winning touchdown between the Vikings and the Saints.

After the game when talking to reporters in the locker room, someone asked Rudolph for the gloves he was wearing during that final catch.

"He walked up, 'Can I have your gloves for a charity event?' I said, 'Yeah, sure. Here you go.' And I said, 'I'll actually sign it for you,'" Rudolph recalled.

But on Wednesday, someone pointed out to Rudolph that the gloves were being sold on eBay. Rudolph tweeted, "I saw this.. it's disappointing. A member of the media in the locker room after the game asked if he could have my gloves for a charity benefit, so I said of course and I will even sign them for you! Well he got me, sold on eBay 3 days later." Ruldoph went on to say that the locker room was a zoo that day and clarified that it wasn't a local reporter or national reporter he knows.

"I'm just disappointed he sold them for $375. At least do an auction. You would've gotten way more," Rudolph said.

The person who ended up buying those gloves on eBay is Jason King of Woodbury Heights, New Jersey.

Credit: Jason King
Jason King, a lifelong Vikings fan, with his family for his son's birthday.

King is a lifelong Vikings fan, explaining, "I picked them out of a pack of cards when I was two years old and it just stuck." He added, "I have a twin brother and him and my dad are big-time Niners fans so there's been a little bit of trash talk back and forth all week."

So King was thrilled when he saw the gloves on eBay. He even found a picture of Rudolph wearing the gloves, looking for the same loose thread on the left glove's middle finger. When it checked out, he bought them.

He's part of a Vikings Game Used/Issued Memorabilia Group on Facebook and quickly found out the backstory behind the gloves.

"I got a screenshot of Kyle's tweet on Twitter so that's when I decided I had to reach out," King said.

King announced that once he got the gloves, he would be donating them. He then encouraged others on Twitter to donate to Kyle Rudolph's End Zone.

"I've got four kids of my own and I've always respected Rudy the player but off the field I respect him even more. It's amazing what he does for you guys out here and what he does for the children. It's incredible," King said.

"As many might know in this community, Kyle's brother was diagnosed with cancer when they were very young and when Kyle was drafted by the Minnesota Vikings, Kyle mentioned to me that he spent a lot of time in a children's hospital and had nowhere to go," said Nick Engbloom, director of community partnerships at M Health Fairview University of Minnesota Masonic Children's Hospital.

The therapeutic patient care space is a place where kids can play and families can connect.

"You can imagine spending hours, months, years in a hospital waiting for a certain diagnosis and heart transplants, all you talk about is medical diagnosis and what your treatment plans are. For just two hours, if you can escape that and be a family, that's what Kyle's End Zone really does... it allows families to be families," Engbloom said.

But it cost money to run their programs which is why they have an ongoing crowdfunding site. Before this all happened, they had raised about $24,000. Since King's post, they've raised more than $14,000. eBay also announced a donation to the cause.

"In all humanity, people are still great. People can do great things and make a difference," Engbloom said.

King added, "It's been overwhelming... honestly speechless. It's crazy. I didn't think it would ever get this big."

Since selling the gloves, the eBay user has changed their handle on the site. But King said he was told they would be shipped to him. If King gets those gloves, he's planning on flying to Minnesota to give them to Kyle Rudolph's End Zone where they would be put on display.

"I believe in karma. I honestly do. I feel like if you do good, good things return to you. Hopefully we get those gloves and we can deliver them to the hospital," King said.

Rudolph tweeted to King that he would make sure to get him a pair of gloves from Saturday's game.

You can donate to Kyle Rudolph's End Zone, here.