'Don’t let this case fall into the pattern of no action.' Beyonce demands justice for Breonna Taylor in letter to Kentucky AG

‘Don’t let this case fall into the pattern of no action after a terrible tragedy,’ Beyonce writes in an open letter Sunday to Kentucky's Attorney General. 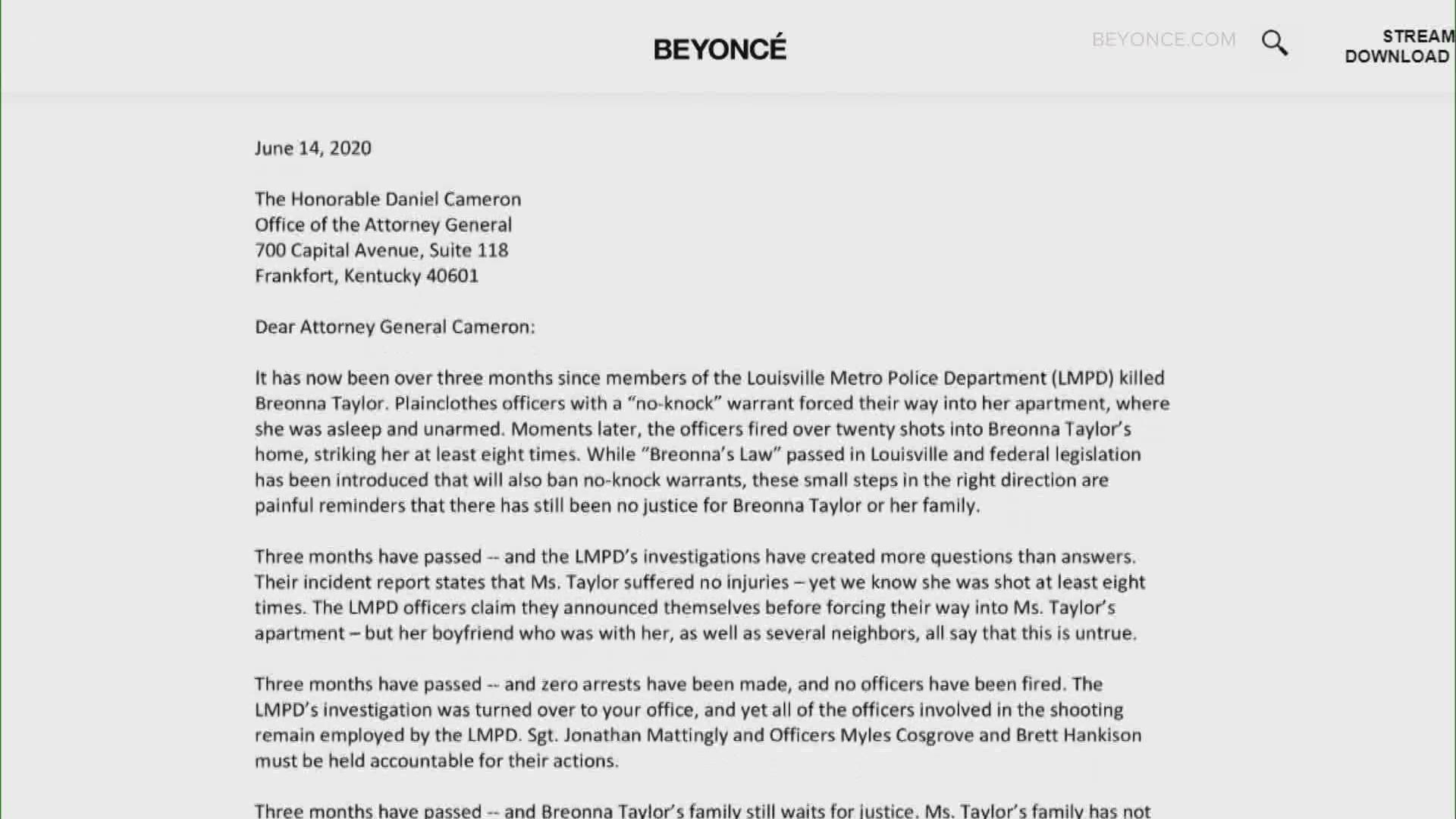 Grammy-award winning singer, Beyonce wrote an open letter to Kentucky Attorney General Daniel Cameron demanding justice for Breonna Taylor and for the officers involved to be charged in her murder.

Breonna's Law was passed on June 12 banning the use of no-knock search warrants, there has not been any arrest made in her investigation leaving the Louisville community feeling like there is still no justice for Breonna or her family.

Protesters have rallied for weeks calling for justice.

Monday, Attorney General Daniel Cameron's office responded with this statement to WHAS11 News about the letter:

"We are aware of the letter. As the letter makes requests related to the ongoing investigation involving the death of Ms. Breonna Taylor, we have no further comment."

It has now been over three months since members of the Louisville Metro Police Department (LMPD) killed Breonna Taylor. Plainclothes officers with no-knock warrant forced their way into her apartment, where she was asleep and unarmed. Moments later, the officers fired over twenty shots into Breonna Taylor’s home, striking her at least eight times. While “Breonna’s Law” passed in Louisville and federal legislation has been introduced that will also ban no-knock warrants, these small steps in the right direction are painful reminders there has still been no justice for Breonna Taylor or her family.

Three months have passed—and the LMPD’s investigations have created more questions than answers. Their incident report states that Ms. Taylor suffered no injuries- yet we know she was shot at least eight times. The LMPD officers claim they announced themselves before forcing their way into Ms. Taylor’s apartment but her boyfriend who was with her, as well as several neighbors, all say that this is untrue.

Three months have passed—and zero arrests have been made, and no officers have been fired. The LMPD’s investigation was turned over to your office, and yet all of the officers involved in the shooting remain employed by LMPD. Sgt. Jonathan Mattingly and officers Myles Cosgrove and Brett Hankinson must be held accountable for their actions.

Three months have passed—and Breonna Taylor’s family still waits for justice. Ms. Taylor’s family has not been able to take time to process and grieve. Instead, they have been working tirelessly to rally the support of friends, their community, and the county to obtain justice for Breonna.

Your office has both the power and the responsibility to bring justice Breonna Taylor and demonstrate the value of a Black woman’s life. I urge you to use that power and:

Don’t let this case fall into the pattern of no action after a terrible tragedy. With every death of a Black person at the hands of the police, there are two real tragedies: the death itself, and the inaction in charging the officers. The next months cannot look like the last three.