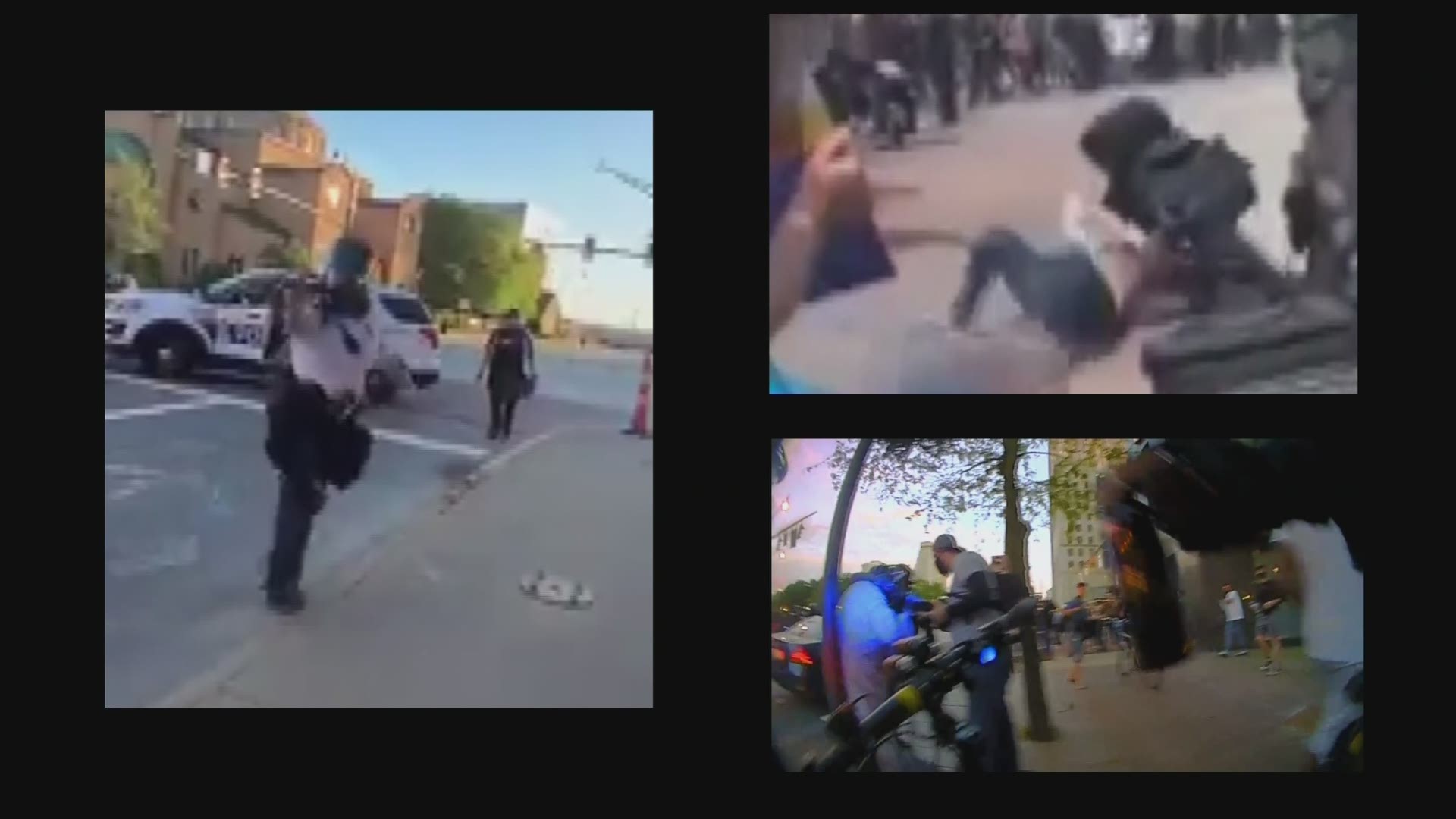 Three officers with the Columbus Division of Police are facing charges for alleged misconduct during the 2020 downtown protests last summer.

Wozniak and Garber were hired by the city to investigate potential crimes by any officers during the protests last summer following the death of George Floyd in Minnesota.

“I was asked by the City of Columbus to independently evaluate the allegations of police misconduct from last summer’s protests so that both citizens and police officers are held to the same standard of accountability,” said Kathleen Garber. “We appreciate the community’s patience over the past year while we have made continued attempts to interview witnessing officers and identify officers committing the alleged misconduct during the protests. We are continuing the investigations into possible misconduct by other officers. We will also continue with investigations with respect to identified officers pending the arbitrator’s decision.”

According to court documents, Shaw was captured on video exiting her marked cruiser near the intersection of High and Goodale streets, walking up to people on the sidewalk and pepper spraying three people.

One person who was pepper sprayed said they were walking home and were several blocks from the crowd of protesters when the incident happened. All three told authorities Shaw never spoke or said anything to them.

Sergeant Holly Kanode has been charged with one count of Falsification and one count of Dereliction of Duty. Sergeant Kanode’s charges are related to an event that occurred on May 30, 2020.

Court documents state that Kanode in the arrest of Nadia Lynch near the intersection of Broad and High streets when Kanode was heard on body camera footage saying Lynch had grabbed hold of an officer and jerked them to the ground. This information was then used in an arrest report.

According to Wozniak, a review of Kanode’s camera and another video submitted to the city did not show Lynch grabbing or throwing any officer to the ground.

“We saw from the beginning that there were issues; we had cell phone camera footage that simply did not line up with the facts of the allegations against her,” said Sean Walton, who representing Lynch.

Officer Phillip Walls has been charged with two counts of Assault, two counts of Dereliction of Duty and two counts of Interfering with Civil Rights. Officer Walls’ charges are related to an event that occurred on May 29, 2020.

According to court documents, Walls was captured on his body camera pepper spraying peaceful protesters at the corner of Broad and High streets.

“At the end of the day I’d like to see justice come for every officer who was out there that followed these policies knowing that they’re illegal or outright went on their own accord and injured folks or violated their rights,” said Rick Lane, who was allegedly pepper sprayed by Walls.

Defense attorney Mark Collins told 10TV he will represent all three officers. The officers are scheduled to be arraigned on July 8.

Attorney Mark Collins represents one of the officers, and will represent all three @ColumbusPolice officers charged from last summer’s protests. pic.twitter.com/yDDcHRWhOH

In a statement, Columbus police said all three officers have been relieved of their regular assignments and will be assigned to administrative duties.

According to the Columbus City Attorney's Office, more than 100 people have been prosecuted for their actions during the protests including rioting, criminal damaging and threatening behavior toward police.

"The City's response to protests early last summer did not meet my expectations or the community's. And while we were quick to make changes to our approach to nonviolent demonstrations - including use of force and chemical agents - the fact is some Columbus police officers acted outside policy, abused their authority and may have committed crimes. That is why we engaged independent investigators to determine whether criminal charges should be filed, and today we got the answer. Officers who break the law should expect to be held accountable."

"The City hired retired FBI agent Rick Wozniak last summer to conduct a fully independent investigation into allegations of misconduct of Columbus Police officers. His focus was to determine whether any officers violated the law in their response to protesters and rioters.

He continues that work in coordination with Special Prosecutor Kathleen Garber. This is important, necessary work.  Answers and accountability are what the people of Columbus demand, and deserve."

"Our officers are some of the best trained in the country and we welcome the accountability that comes with our job. The Columbus Police Officers who have been charged with misdemeanor misconduct have the constitutional right to due process and are presumed innocent until proven guilty.

In this case, the officers will receive representation. After consulting with our Lodge Counsel, we believe the officers acted appropriately within the scope of their duties."