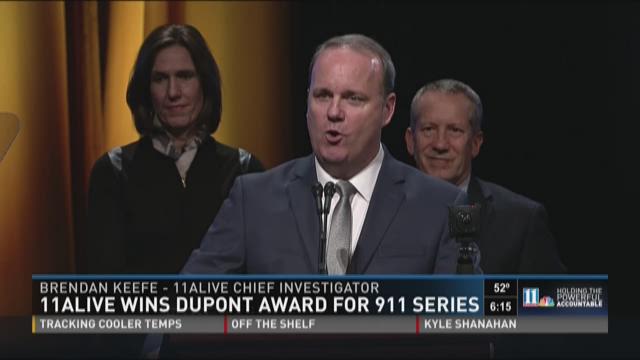 11Alive's investigative series on the flawed 911 system is a winner of the prestigious Alfred I. duPont-Columbia University Award.

11Alive's award was for the second year of its ongoing investigation into problems with the 911 emergency system, and advocated for potential solutions to fix this critical issue facing communities. In Dying For Help: Fixing The Nation's Emergency Response System, the 11Alive Investigators successfully tested an invention call LaaSer, created as a direct result of the front page USA Today article reported by Brendan Keefe and John Kelly in 2015.

“Congratulations to WXIA, and the reporting led by [11Alive's Chief Investigative Reporter] Brendan Keefe, on this deserving honor. Not only did they investigate a deadly issue facing our communities but they proposed solutions that will make a difference and help save lives,” said TEGNA Media President Dave Lougee. “This investigation is a prime example of the importance of local journalism and investigative reporting. We are an advocate for our communities and are committed to empowering the people we serve.”

The winners were awarded at a ceremony at Columbia University in New York on Jan. 25. Other winners include the PBS Frontline series, NBC News Dateline's "The Cosby Accusers Speak" and ESPN Films "OJ: Made in America" documentary.

Lost on the Line: An 11Alive Investigation into how 911 is broken:

- A possible fix to the broken 911 system