Prices of Uber/Lyft have gone up, but the drivers aren't seeing much of the money

11Alive investigation put the apps to the test and found driver making only around 50-percent of the fair. 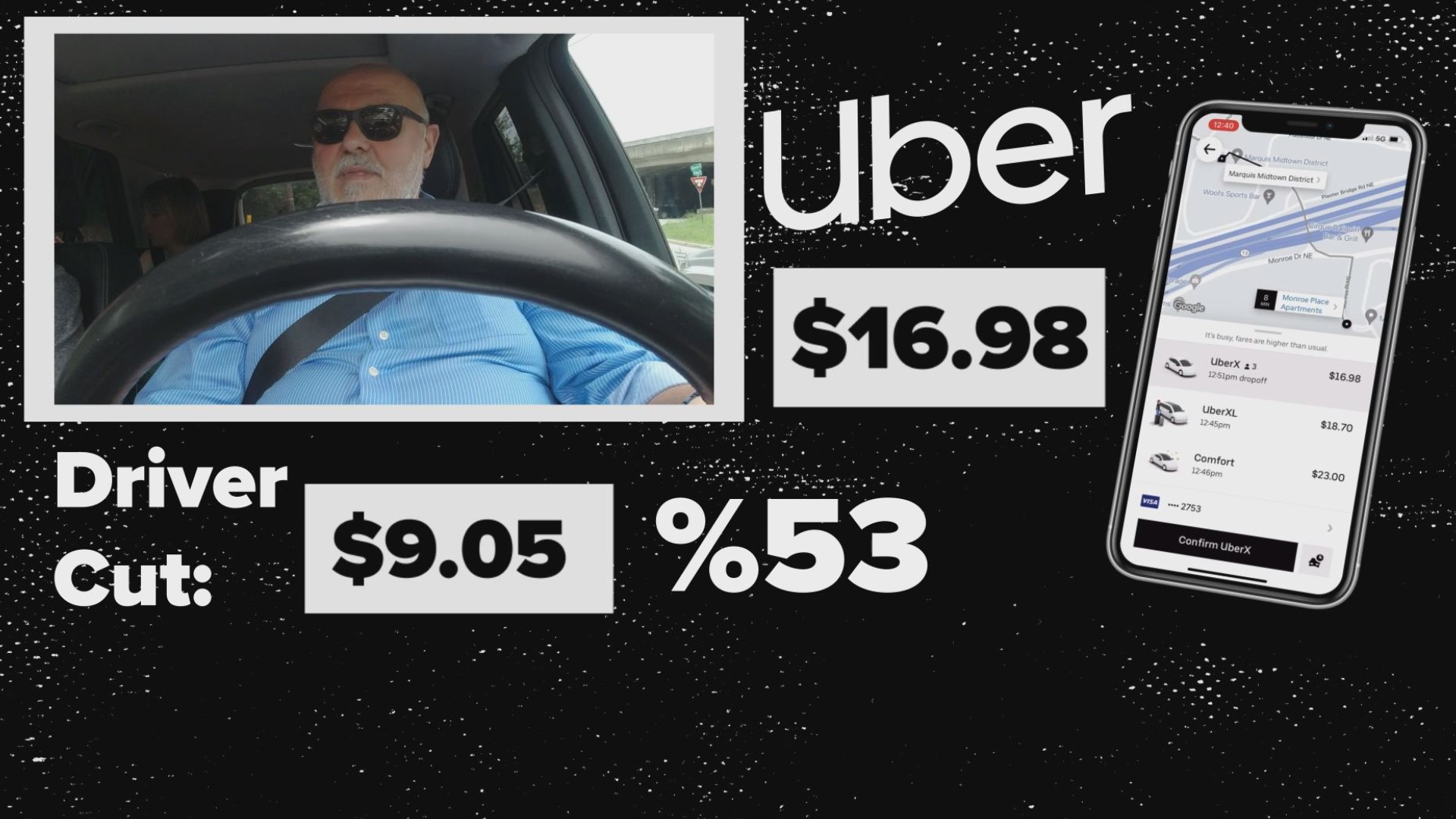 ATLANTA — Getting a ride with Uber or Lyft these days may seem more challenging and more expensive than it did pre-pandemic.

“It went up $20 from the moment we left security here to the entrance over here,” Allison Ranchhouse said after ordering a Lyft outside Hartsfield-Jackson International Airport.

Aaron Robertson had a similar experience. His ride from the airport was quoted at $47. But time was not on his side. “New fare, it just went up to $55 while we were speaking,” he said.

Increased prices and price jumps aren’t the only challenges.

“We’ve been waiting for like 15 minutes now. It was never like that before the pandemic,” Ednia McCall said.

Lyft told 11Alive in a statement: "Earlier this spring, as vaccines rolled out and people started moving again...we began to see the demand for rides outpace the number of available drivers. We’ve added thousands of drivers in the past few weeks and it’s already leading to a better rider experience with wait times down more than 15% nationwide.”

But are things really improving? Not according to some drivers.

“You get more customers now because, as I said, not many drivers on the road,” said Hakan Senkal, who drives for both Uber and Lyft.

Senkal said he’s been 40 minutes away from a customer and is still the closest rideshare driver to them. But he said they don’t mind waiting.

“Because there’s no car, otherwise they will end up waiting for an hour/two hours,” Senkal said.

Not only are people willing to wait, Senkal said they’re willing to pay. But higher rates aren’t necessarily translating to higher pay for drivers.

“It’s just putting a finger of honey in the mouth of drivers,” Senkal said.

11Alive's investigative team, The Reveal, put both of the popular rideshare apps to the test to see how much drivers are compensated.

We booked a ride from the 11Alive parking lot to an apartment complex a quarter mile away. Uber charged us almost $17 for the ride. It turned out Senkal's cut was $9.05, about 53-percent.

RELATED: ‘Please, I have a son’: Uber driver robbed at gunpoint, car and green card stolen

“Four dollars. And they are making more money than the driver, can you believe that?” he said.

The cut doesn’t sit well with some customers.

“I think that it’s OK if I can’t find a ride if they’re not paying their employees enough money,” Ben Hall said.

It doesn’t sit well with Senkal either. He said until the pay improves for drivers, to incentivize them to get on the road, he thinks those long waits and increased rates for riders may continue.

Regarding driver pay, Lyft told The Reveal, “Drivers are paid based on a base rate as well as time and distance, not what a rider pays.”

Uber did not return our emails for comment about driver pay or the increase in prices and wait times.

More from The Reveal:

Cop: Nation's busiest airport only has 'one damn ambulance'