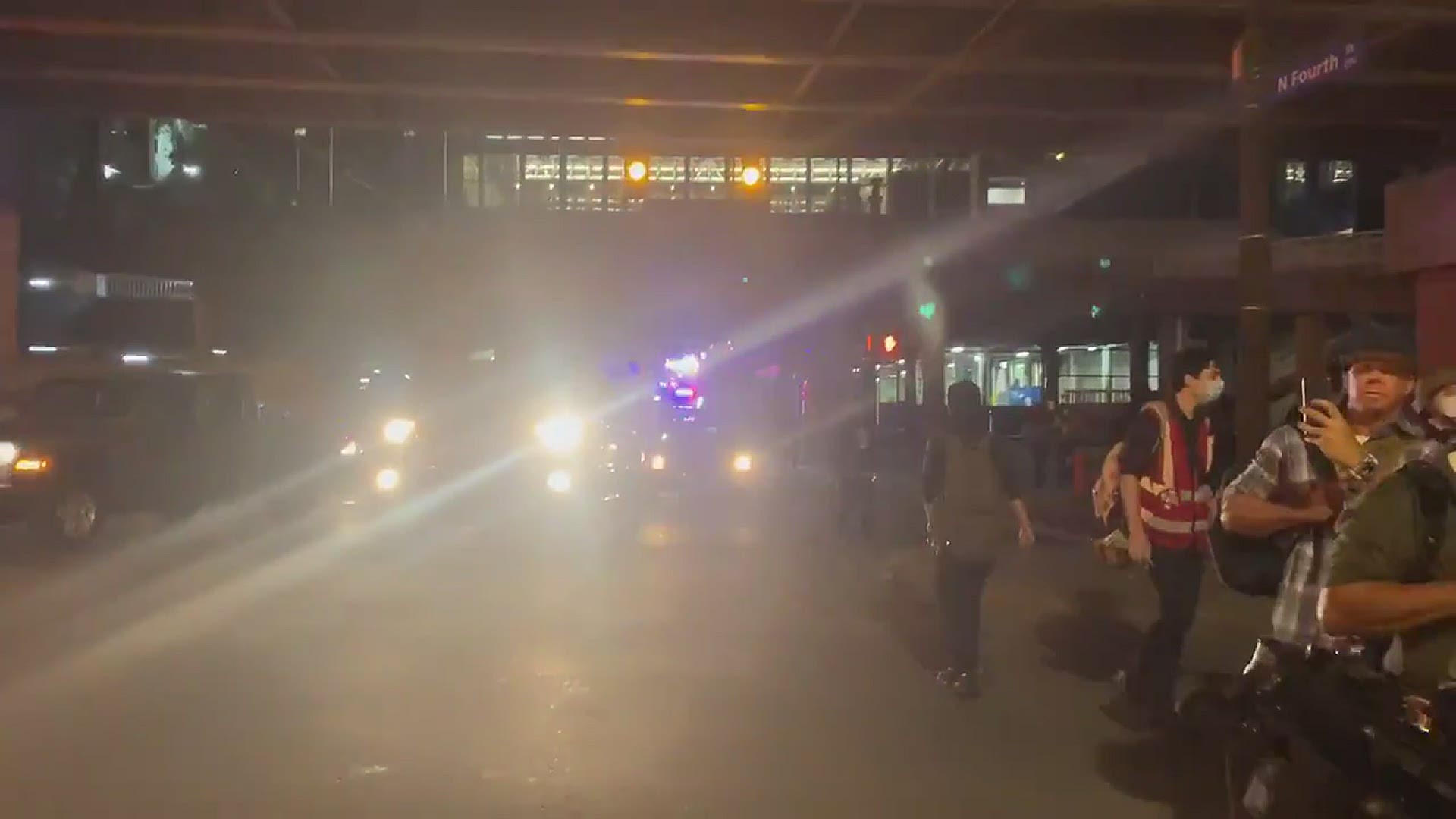 LOUISVILLE, Ky. — Editor's note: This blog contains details of what happened Thursday, September 24 in Louisville, Ky. the day after a Jefferson County Grand Jury announced its decision in the case of Breonna Taylor. All times listed are in Eastern Time.

On Wednesday, Sept. 23, former Louisville police officer Brett Hankison was indicted on three counts of wanton endangerment, nearly 200 days after the death of Breonna Taylor. His charges were not related to her death and the other officers involved were not indicted by the grand jury.

Attorney General Daniel Cameron explained the findings of his investigation in a press conference Wednesday and said Sgt. Jonathan Mattingly and Det. Myles Cosgrove were both "justified" in their actions on March 13.

After the announcement, protesters filled the streets and many were arrested throughout the afternoon and evening.

9 p.m. Protesters began marching through Louisville, eventually stopping at what they have referred to as a safe zone: First Unitarian Church on 4th and York.

The church announced Wednesday it would be open for those who seek sanctuary. WHAS11 spoke to the church, who said they did not expect so many protesters. Police surrounded the property, saying people off the property can be arrested.

5:45 p.m. Mayor Fischer extended the countywide curfew through the weekend. The curfew is in effect 9 p.m.-6:30 a.m. and people are urged to begin heading home no later than 8 p.m.

11:40 a.m. LMPD spokesperson Dwight Mitchell sent out a release with information on the 127 people arrested in Wednesday's protest.

According to the spreadsheet, 56 of the 127 listed arrests were from out of town.

Charges for those arrested include Breaking Curfew, Rioting and Unlawful Assembly, among others.

Schroeder provided an update on the two officers who were shot. Mjr. Aubrey Gregory and Officer Robinson Desroches were both injured. Gregory was shot in hip and was treated and released. Desroches was shot in abdomen and underwent surgery. Both officers are expected to be okay.

In the press conference, Schroeder was unable to provide additional information about the shooting. The interim Chief cited that it is an "ongoing investigation."

Of the 127 arrests made Wednesday, it is unclear what their exact charges are at this time. Schroeder said LMPD would provide more detail later in the day on the charges and if those arrested were from Louisville.

Additionally, Schroeder said stores across Louisville were "looted" over the course of last night. Store locations include Preston Hwy., Poplar Level Rd. and areas downtown. When asked, Schroeder was unclear if all these incidents were related to protests.

Schroeder said he expects police response to be the same today as it was Wednesday.

8:45 a.m. A source within Metro Corrections confirms to WHAS11 that Larynzo Johnson has been charged in connection with the shooting of two Louisville Metro Police officers during Wednesday night's protests.

Johnson is charged with 14 counts of wanton endangerment and two counts of assault against a police officer. Johnson will be arraigned September 25 at 9 a.m.

Larynzo Johnson booked into Metro Corrections this morning, charged with assault in the shooting of 2 LMPD officers, along with 14 counts of wanton endangerment against police officers. Both cops expected to be okay. @WHAS11 pic.twitter.com/jvL3iQ2NdK

As of Wednesday night, both officers are expected to survive. The officers have not been identified.

8:30 a.m. Dwight Mitchell with LMPD says a total of 127 people were arrested during Wednesday's protests.

Washington said the department expects the total number of arrests to be close to 100, but the numbers were still being tallied. He reiterated that one person was in custody for shooting two LMPD officers Wednesday evening.

1:45 a.m. FBI Louisville issues statement on Twitter, asking for the public's help to learn more about how two LMPD officers were shot Wednesday night. Anyone with photos or videos of the incident are asked to submit them online.

It has been nearly 200 days since Breonna Taylor was shot and killed inside her Louisville apartment by Louisville Metro police officers. According to LMPD, officers were executing a no-knock search warrant at Taylor's apartment as part of a drug investigation.

Cameron was asked to start an investigation into the incident on May 13. A month later, on June 18 Cameron held his first public news conference about the investigation. He asked for patience.

"An investigation of this magnitude, when done correctly, requires time and patience. However, I can assure you at the end of our investigation, we will do what is right. We will find the truth," Cameron said.

Who was Breonna Taylor?

Breonna Taylor was a decorated emergency medical technician, working for both Jewish and Norton Hospitals. Taylor loved her family and had an ambitious drive to succeed, according to those that knew her.

"All [Taylor] cared about was being great and helping people," Taylor’s mom said.

Taylor’s family members say that she was kind, hardworking, and honest.

“She (Breonna) was already an accomplished and certified EMT for the City of Louisville and currently worked for UofL as a medical tech," said Bonica Austin, Taylor’s aunt.

Taylor did not have a criminal background. Attorneys said no drugs and no cash were found in her apartment the night of her death.

Taylor’s family filed a lawsuit against the officers involved in the shooting on April 27. On September 15, the city of Louisville announced a $12 million settlement with Taylor's family -- the largest sum paid by the city for a police misconduct case.