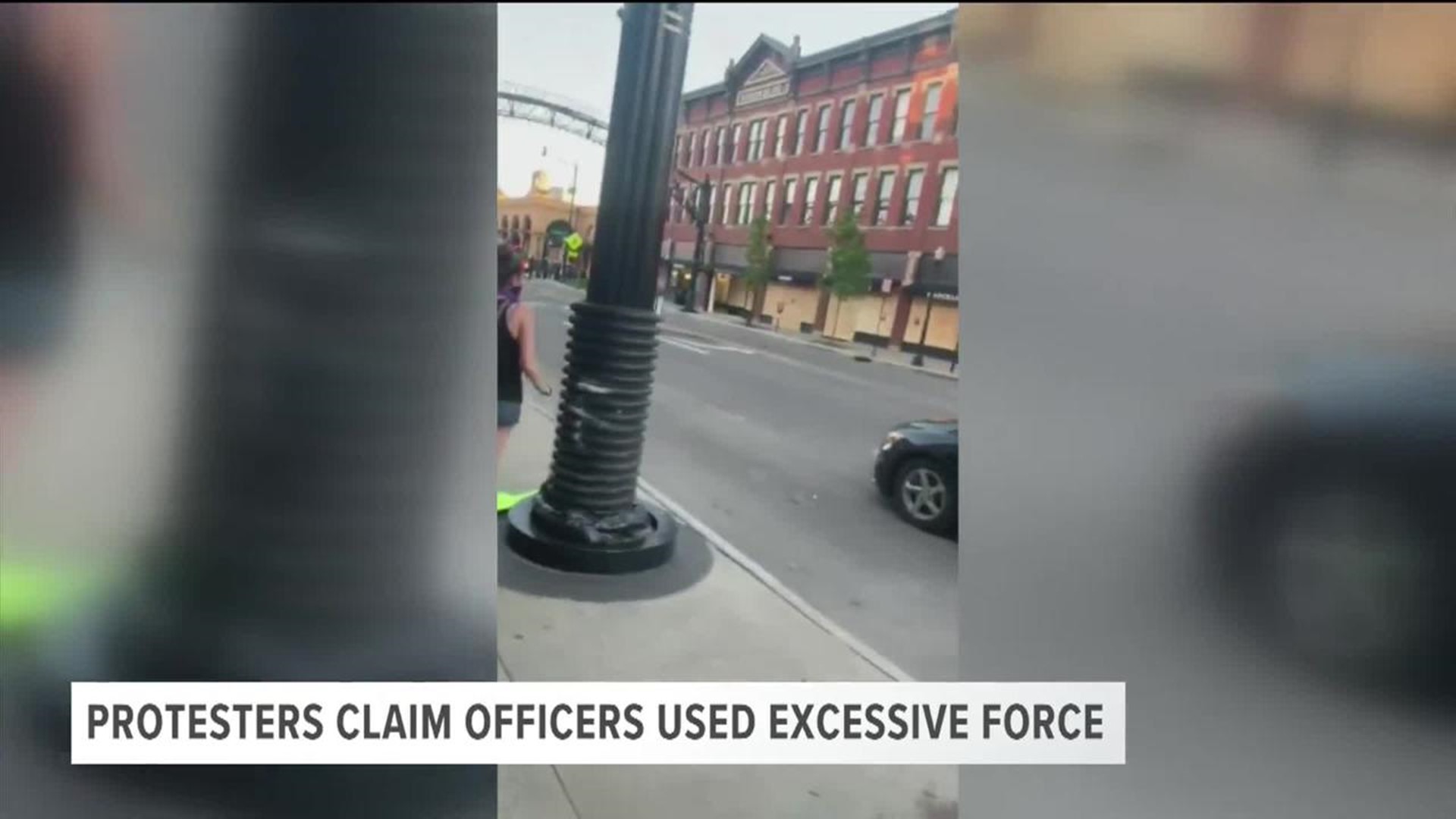 COLUMBUS, Ohio – It was last Saturday night in the Short North Arts District in Columbus. Protesters were gathered in the street, when Columbus police officers rushed in and tackled several people, taking them to the ground and arresting them.

The scene was captured on video from a window above the street by Andy Choi, who gave 10TV permission to use the video on its platforms.

Among those arrested were Ian Brandeberry and Shelby Owens.

“It was just a lot of pain and terror,” Brandeberry said of his arrest. “All the mace to the face, being tackled to the ground, being shoved around.”

His tackle arrest happened after seeing Owens taken to the ground.

“It just didn’t seem real, it seemed like something I would have seen in history class out of the 60s,” Owens said. “It’s just confusing and disheartening to see police acting so violently toward the people they’re supposed to be serving and protecting.”

So 10TV took the video to the two agencies involved – the Columbus Division of Police and the Franklin County Sheriff’s Office.

“Because I wasn’t there, without context, it does look a little alarming when you see multiple people taken down by police officers and tackled in the middle of the street in broad daylight,” CPD Sgt. James Fuqua said.

He and several other officials from both the police department and the sheriff’s office gathered together to present a timeline, along with nearly one hour of additional video and pictures, to tell more of the story and to provide context.

“(We) just kinda put everything together and just realized, okay, there’s a lot more to it than just what you’re seeing at the very, very end, this is a two-hour endeavor,” said Sgt. Ray DeBolt with the Franklin County Sheriff’s Office. “It’s hard to tell the whole story with just a snippet of it.”

Officials say the trouble began around 6:30 p.m. on Saturday, May 30, at High and Goodale, right on the Interstate 670 overpass. Seven CPD officers were faced with between 100 and 200 protesters.

“The peaceful protesters had now moved on, and these were violent rioters who were throwing rocks, huge concrete, and other objects at officers on the scene that they were left no choice but to get on the radio and call an officer in trouble,” Sgt. Fuqua said.

And that call for an ‘officer in trouble’ is important because officials say that was the catalyst for everything that happened after that.

The FCSO SWAT team responded to help while waiting for the CPD arrest unit to arrive. The call went over the loudspeaker that protesters should clear the area.

“We’re all about peaceful protesting, I want you to protest, that’s your First Amendment right, but when it turns into where I have to go save officers, that’s a problem,” Sgt. DeBolt said. “That’s what we were called for, that’s the whole point of this whole thing is that we had to clear people off the street because I had to make sure the officers were safe.”

But officials say protesters did not leave as they were asked. They used tear gas, pepper spray and knee-knockers to push the crowd into Goodale Park. But officials say the protesters then flooded up side streets to return to High Street. And the standoff continued.

The most concerning part, officials say, is that two black cars were part of the mix. They say the drivers continually revved their engines and moved toward officers, which was supported by the videos shared with 10TV.

“I mean, he’s literally driving straight toward my officers, that’s a dangerous situation for all my guys,” Sgt. DeBolt said. “That is actually subject to lethal force at that point. What we did is we used less-lethal force, so which means we used tear gas and pepper ball grenades and all that kinda stuff.”

After the tear gas was deployed, one of the black cars turned off onto a side street, where officers caught up with it. The other car stayed, continuing to engage with officers and later hitting a protester, police said.

At this point, the officers are still on scene, waiting for the CPD arrest unit to arrive and continually telling protesters to leave. Officials used Brandeberry’s own Facebook video to prove their point, saying they counted more than 100 times during his roughly 40-minute video where the announcement to disperse could be heard.

Both agencies were clear that they had no intention of shutting down a peaceful protest. The problem, officials said, was that many of the protesters were not staying peaceful. They say officers were hit with bottles, rocks and chunks of concrete. They showed pictures to 10TV of one of the rocks used and the injury to the leg of one officer who was hit by the concrete.

“Over 100 times, no one listened,” Sgt. Fuqua said. “We had to go in, we had to put hands on people, we had to remove people from the area because it became too dangerous, not only for ourselves as officers, but peaceful people that were mixed into this crowd were starting to take objects, such as rocks, large pieces of concrete. We even had a situation where the person driving the car tried to run someone over trying to leave.”

And that happened when the CPD arrest unit finally did arrive, after having been tied up in other parts of the city, roughly two hours after that call for officers in trouble.

Officers say it was a coordinated effort to surround the protesters and finally make those arrests, and that played out in the scene in that roughly two-minute video that sparked the questions in the first place.

At that point, officers say they needed to control the crowd, and they had no way of knowing which protesters were peaceful and which were not.

“The sheriff’s office completely believes in the First Amendment, we want you to be able to speak your mind, we want you to be able to protest,” Sgt. DeBolt said. “That’s great, and that’s what we all believe in. But when we have people throwing rocks at us, when we have people acting toward us violently, I can’t tell who’s a protester and who’s a rioter at that point.”

That comes as a surprise for Brandeberry, who told 10TV he had no idea he was subject to arrest because of that loudspeaker announcement and did not believe he could be arrested at all as a peaceful protester.

“We understand that the optics may look bad, but here’s one thing to understand – hands up does not necessarily mean compliance, and what I mean by that is – we have already given the order over 100 times, we used the L-RAD system, which is a system that, it’s an audible system that we use to clearly, loudly and accurately display the message over airwaves where everyone can hear to please leave the area, and we make it very clear that you can be subject to arrest because you are now violating an order to get out of the street and leave the area for everyone’s safety.”

Still, both Brandeberry and Owens say they believe officers used excessive force during their arrests. And they believe the video is evidence of that.

“Maybe it started on the protesters’ side, maybe it started on the police side, but either way, escalating is not the way to go,” Brandeberry said. “What we went through is just like, it’s nothing in the drop of a bucket of what people have to deal with every day. And that’s frustrating, that’s not right, and that’s why we were out protesting, just to support the community.”