WBNS-TV’s investigative unit, 10 Investigates, in partnership with our TEGNA sister stations in Toledo (WTOL) and Cleveland (WKYC) reached out to more than 600 school districts across the state. 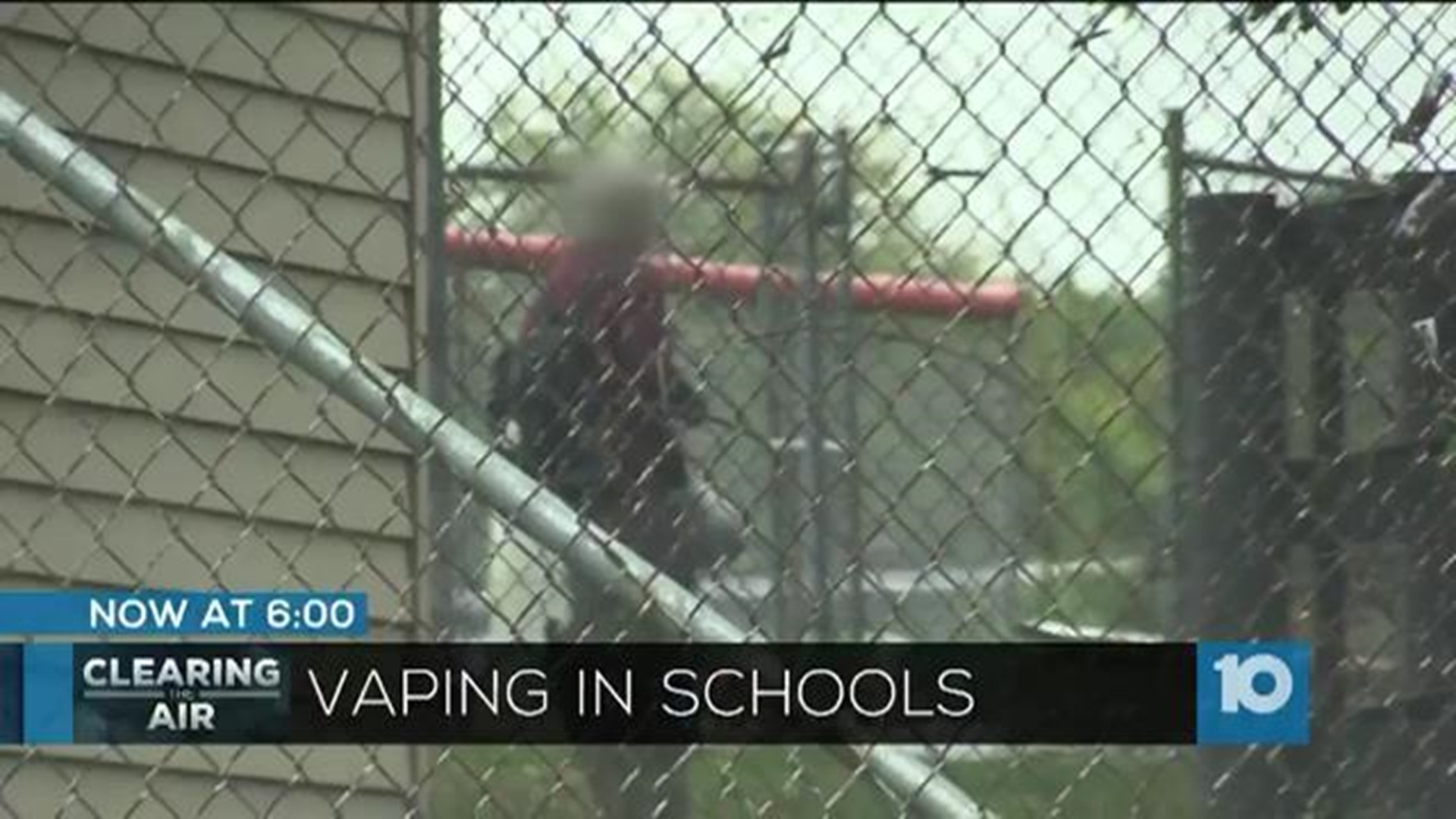 COLUMBUS, Ohio — Three second graders in one Ohio school district were caught with a vape pen.

In another district, a superintendent said he has a student with a $150 per-week vaping habit.

Those stories are just the tip of the iceberg.

Vaping in Ohio schools has become a pervasive and costly issue.

Students caught doing it are disciplined and miss class time while districts are now spending thousands of dollars on vape detectors to combat the problem.

Across the state, the number of vaping incidents in Ohio schools has skyrocketed by more than 700 percent since 2016, according to a months-long investigation by WBNS-TV’s investigative unit, 10 Investigates.

The reporting was done in partnership with our TEGNA sister stations, WTOL in Toledo and WKYC in Cleveland.

Ohio schools are not required to track vaping incidents, meaning until now, there has been no readily-available or centralized data to track the problem.

10 Investigates, along with reporters at WTOL and WKYC, reached out to more than 600 school districts across the state.

Four-hundred-fifty school districts got back to us and 353 gave us specific information on vaping.

What we found uncovered an alarming trend: vaping incidents in Ohio schools have skyrocketed from 773 two years ago to more 6400 incidents last school year — a 732 percent increase.

View Vaping in Ohio Schools in a full screen map

Those figures do not include the 193 districts that either refused to comply with our requests for vaping incidents or said they couldn’t track it because their districts combined vaping and e-cigarette violations with other forms of traditional tobacco.

List of school districts that declined or could not supply vaping data can be found here.

Many of them told us they didn’t track it or provided us with attorney form letters claiming that 10 Investigates was seeking “information” and that they had no duty to create a public record that didn’t already exist.

In response to our reporting, Gov. Mike DeWine’s office said that he hopes the Ohio Department of Education will change its policy to collect better data when it comes to vaping in schools.

“… Governor DeWine will work with State Superintendent Paolo DeMaria and the State Board to encourage better data collection around youth vaping and hopes the Board will change its policy to capture specific information about vaping disciplinary issues at Ohio schools.

In addition, he will ask ODE to consider surveying schools to gather facts about vaping incidents to provide a current snapshot of the data.”

In response to our reporting, a spokeswoman for the Ohio Department of Education said that the department is now considering better data collection of vaping within the state’s 600+ school districts.

“As shown by the results of the survey of districts made by 10TV (sic), individual schools and school districts have the capability to precisely understand the prevalence of student vaping incidents in their schools. Some districts, in fact, have made decisions to take action such as by better informing students of the risks of vaping and installing vape detector devices. The Ohio Department of Education is happy to collaborate to gain a better statewide understanding of the prevalence of vaping in schools. We are talking with districts about the feasibility and reliability of collecting current year data about the number of vaping incidents occurring in Ohio schools through a non-routine process. We are also exploring longer term more routine data collection options.”

Some of the schools districts that did not supply data included large districts like Dayton, Cleveland and Columbus.

Despite repeated requests for information, a CCS spokeswoman told 10 Investigates in an email that the district doesn’t track vaping incidents and that “vaping is not something we see much of in our buildings.”

But that’s not what CCS students told 10 Investigates.

“Yeah, well, I actually got in trouble for doing it because we try to hide it a lot. Vaping is just something that's just easy for us to do without having to light something or a lot of smoke or something,” said West High School student Jayden Smith.

Another one of his schoolmates, DeShawn Cumberland, told us: “I think the school should crack down on it more because it is a very serious topic.”

A CCS spokeswoman declined our repeated requests for an on-camera interview with Superintendent Dr. Talisa Dixon.

Students in the state’s largest school district told us they believe the district is aware of the problem but perhaps not aware of how often vaping is occurring because students often hide it or less likely to turn in a fellow student — afraid of being labeled as “a snitch.”

When asked how often he sees it happening, one Centennial High School student, who asked not to be identified, told us: “Sometimes I see it in class — like every single day. I don’t really see it that much in the bathroom.”

Another West High School student told us he believes traditional tobacco products are still popular among his classmates but that vaping does occur.

Another student in the central Ohio school district, who had been cited in juvenile court for a tobacco violation, initially agreed to be interviewed by 10 Investigates about her vaping habits, but later declined after fearing she would receive grief from classmates.

Over the course of several days in October, 10 Investigates twice captured video of students vaping near the edge of campus at Westerville South High School.

Greg Scott, who lives directly across from the high school, has called Westerville Police twice to complain about students vaping in and around that campus.

Scott told us he’s tried to dissuade students from vaping.

“I'd rather them not smoke at all, I smoked for God how many years — 30 years. Finally got smart and got off it,” Scott said. “But I see it a lot. A lot more than I used to.”

As a district, Westerville had similar results to several other school districts that saw growth in vaping incidents over the past few years.

Other districts like Toledo, Highland, Washington Court House, Wilmington City, Springfield, Strongsville all showed growth in the number of incidents since 2016.

Dr. Wagner’s district — in one of the fastest growing communities in central Ohio — is now considering purchasing vape detectors in hopes of deterring students. Districts like Hilliard, Southwest Licking and Olentangy have already purchased and installed the detectors.

At Heath High School, Principal Kat Fields says she believes students have been targeted by JUUL, the popular e-cigarette maker which controls about 70 percent of the market. Fields even got into a Twitter spat with JUUL earlier this year.

She told 10 Investigates: “Yes, I tried to call the JUUL company out on that... They are very adamant that this is for adults.”

During a Congressional subcommittee hearing this past July, parents of students and lawmakers said that JUUL created a “sophisticated program” to target students.

Internal JUUL documents show the company paid large amounts of money to gain access to students — "$10,000" "$89,000" even "$134,000" to provide educational seminars at schools in California, Maryland and Arizona.

JUUL said the programs were designed to "combat underage use of JUUL."

In an emailed response, a JUUL spokesman did not answer 10 Investigates’ direct questions about if the company had targeted teens or if it bears some responsibility for the rise in teen vaping.

But the spokesman did say that concern about its education outreach “was clearly misconstrued” by lawmakers and others.

The spokesman went on to say that the company has since launched programs at combating youth vaping, pulled flavors off store shelves and changed its company leadership.