In the video, Mount Carmel President and CEO Ed Lamb offers messages of support to employees but also appears to lay blame: 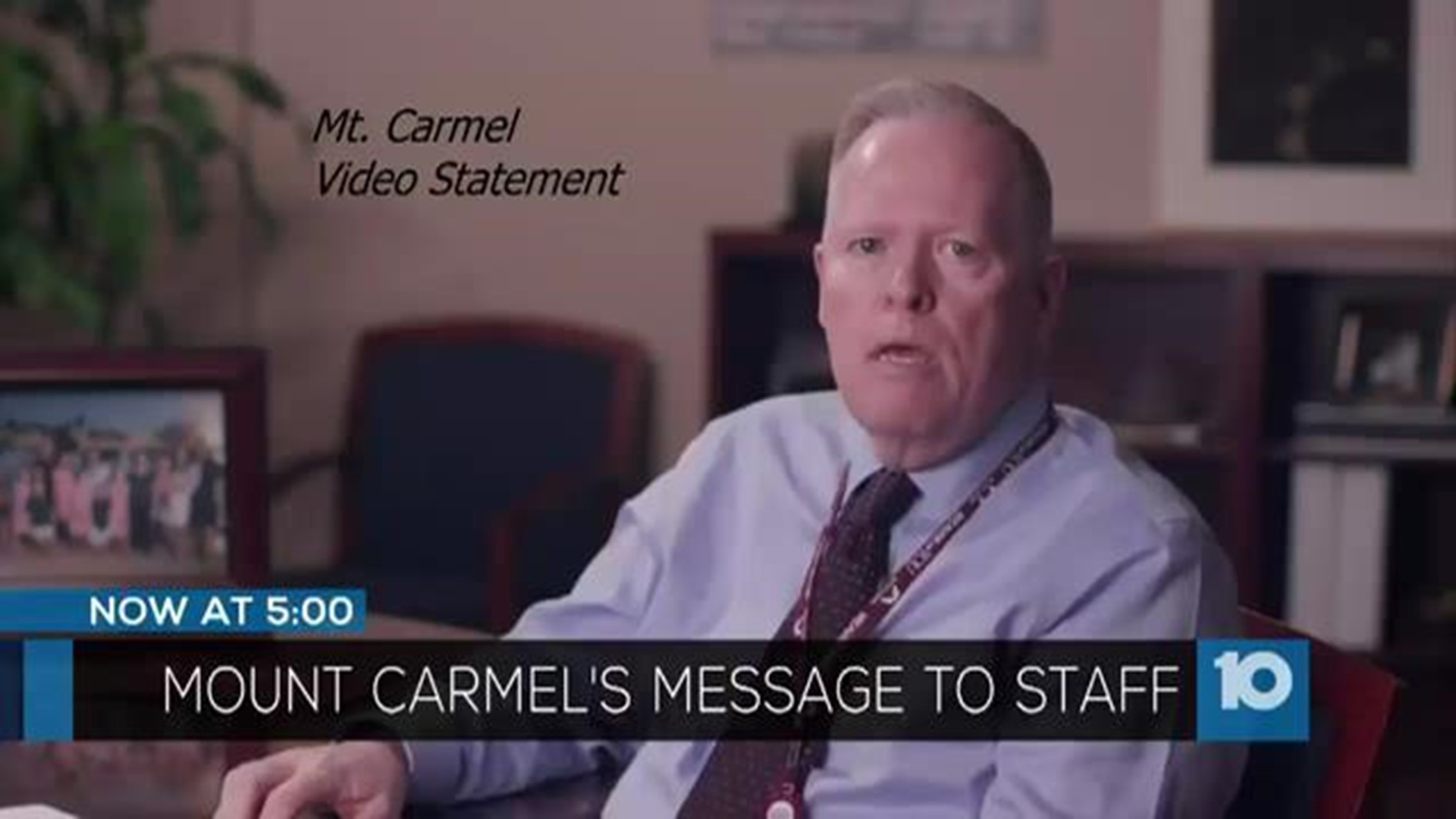 COLUMBUS – A second video statement has emerged from Mount Carmel President and CEO Ed Lamb – this one made specifically for Mount Carmel Health System’s 11,000 employees.

This second video, obtained by 10 Investigates, discusses the scandal unfolding at Mount Carmel West Hospital – where 27 near death or intensive care patients are believed to have been given lethal doses of fentanyl over a period of years.

In the video, Lamb offers messages of support to employees but also appears to lay blame: “The actions that created this tragedy were instigated by this physician and carried out by a small number of people who made poor decisions. They ignored the safeguards we have in place.

“Our culture of safety means that unintentional human error is not punished. Instead, we use those occasions to learn and become better. And we will. At the same time, we can’t disregard colleagues ignoring policies and putting our patients’ safety at risk.”

The hospital has said it implemented policies 18 months ago – known as ZeroHarm and High-Reliability training – to stop preventable medical errors. It has said this focus helped “discover these events” because “one of our employees spoke up and reported a safety concern.” Lamb thanks that employee in this second video for having the courage to come forward.

Mount Carmel has said it first began investigating in late October after that unnamed employee came forward with an allegation with concerns about patient care. A month later, around Nov. 19, more details emerged and the hospital says it took prompt action.

Dr. William Husel, an intensive care physician, has been fired and 6 pharmacists and 14 nurses – accused of filling the orders and helping administer the drugs – have been removed from patient care.

This second video appears to have been uploaded on January 14, 2019 – the same day Lamb released a video statement to the public and reporters detailing how his hospital had fired intensive care Dr. William Husel and removed 20 caregivers from direct patient care.

“Hi everyone. The video you just watched was just released to the public and the news media. This message is especially for you,” Lamb said.

Unlike the first video, language used by Lamb in this second video appears to hint at a shared blame between both Dr. Husel and employees.

“As you can imagine, the tragic news has caused many tears and anguish throughout our Mount Carmel family. The physician’s actions were unacceptable and inconsistent with our mission and values,” Lamb tells employees. “Sadly, our investigation revealed that some of our colleagues did not meet our standard of care.”

Since news of the scandal broke, Mount Carmel has said that it has reviewed and implemented new policies – including a new escalation policy for increasing pain medication and a new approval process for pain medication at high doses.

“Part of this journey includes finding and fixing problems. As these investigations continue, it’s possible that we will uncover more things along the way,” Lamb tells employees in the second video. “We want you to be as transparent as possible and there may be some details we just simply can’t share. Please trust that we are doing the right things to keep our patients safe.”

The Ohio Department of Health announced on Friday that it was investigating Mount Carmel “on behalf of the Centers for Medicare and Medicaid Services” but declined to offer details. A Mount Carmel spokeswoman said that the state conducted a site visit at the hospital last week.

On Tuesday, a CMS official told 10 Investigates that “CMS has authorized a complaint investigation into Mount Carmel West based upon a complaint we received related to our Condition of Participation: Pharmaceutical Services.”

The CMS official, speaking on background, told 10 Investigates that the complaint investigation began January 15 and did not have a timeframe for its completion. Hospitals that accept Medicaid reimbursement must be compliant with rules that govern quality and safety of patients. If the hospital is found to be out of compliance, it could jeopardize the hospital’s Medicaid reimbursements or even its deemed status.

Three wrongful death lawsuits have accused of Husel or ordering “grossly inappropriate” amounts of painkillers which were administered to patients who were either near death or in intensive care. The attorneys representing patients’ families have argued in their complaints that Husel’s actions hastened the patients’ deaths. The pharmacists and nurses have been named – it’s alleged in the lawsuits – for approving the drug orders and administering them.

So far, six patients have been identified as being among the 27 patients who received potentially lethal doses of painkillers. The youngest to date, 37-year old James Nickolas Timmons. His attorney Craig Tuttle told 10 Investigates Monday that Timmons was brought to Mount Carmel West Hospital in late October of 2018 for a cocaine overdose. He died two days later from an intoxication of cocaine and fentanyl, attorney Craig Tuttle said.

10 Investigates wanted to know why it was necessary for the hospital to create a second video.

In an emailed statement, A Mount Carmel West spokeswoman said: “As for Ed's video message to our more than 11,000 employees, it was largely the same points made in the external video. We believe it's important to communicate with our colleagues about important subjects like this, so we sent out that video last week combined with our video media statement. We think responsible leaders should keep their team informed and this video was just one example of how we do that.

10 Investigates has also learned that a fourth wrongful death lawsuit has been filed on behalf of 65-year old Jan Thomas. The attorney representing her family, David Shroyer, says Thomas died on March 1, 2015 after being taken to Mount Carmel West Hospital and being placed in the ICU. He says she was given 800 micrograms of fentanyl, which his lawsuit claims is “grossly inappropriate.” The lawsuit alleges she died within minutes after receiving the drug.

A fifth lawsuit is pending. Attorneys Craig Tuttle and Gerry Leeseberg have identified another patient, 80-year old Jim Allen, who they say died after receiving 1,000 micrograms of fentanyl. He had been taken to Mount Carmel West Hospital in May of 2018 while battling infections – including sepsis.