Thirteen people have filed a federal lawsuit alleging that they were injured by officers’ use of excessive force during last month's protests. 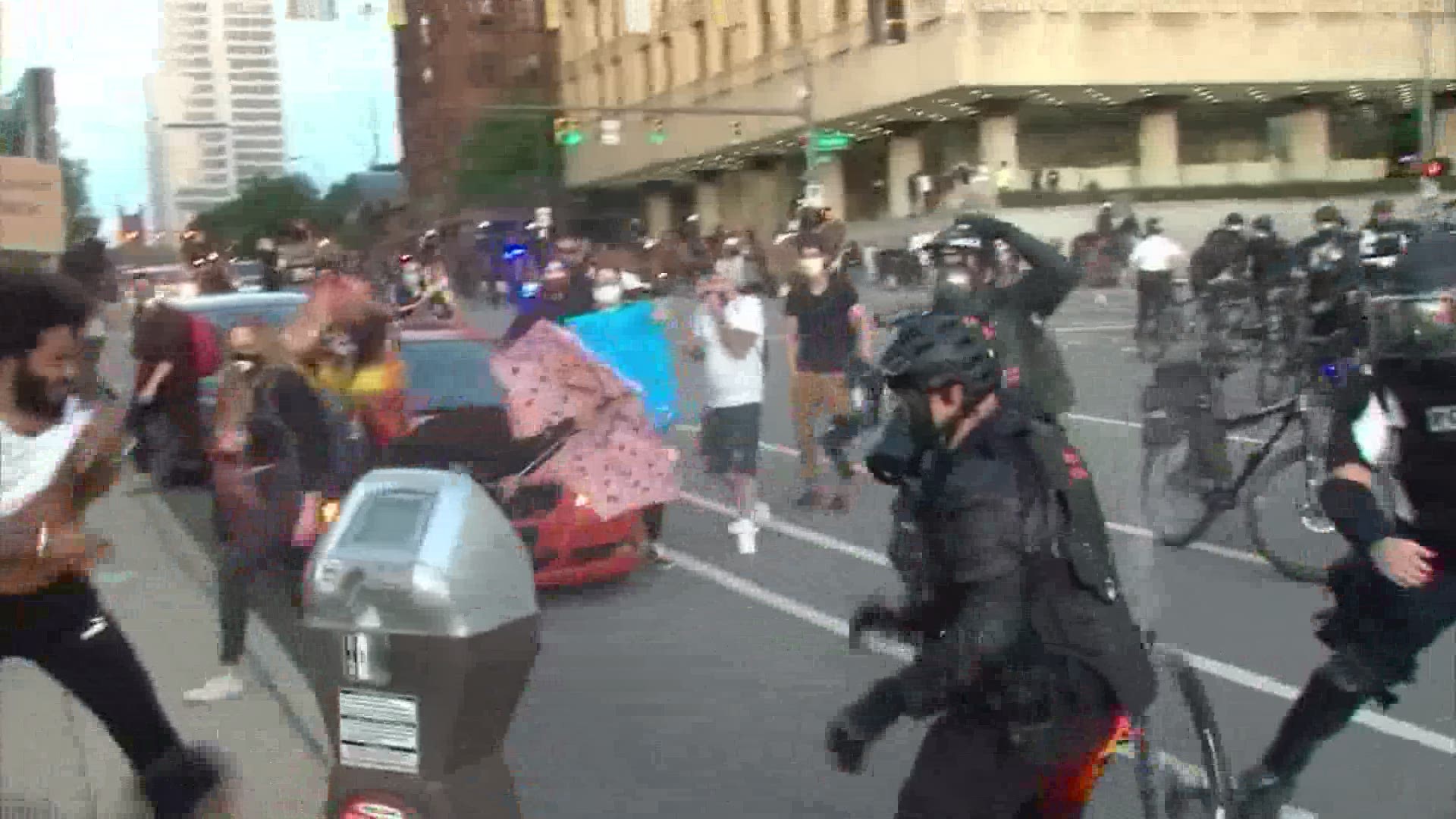 Thirteen people have filed a federal lawsuit against the city and the Columbus Division of Police alleging that they were injured by officers’ use of excessive force during last month’s protests.

The lawsuit – which seeks damages and departmental policy changes -- alleges that the people’s civil rights were violated by officers who were “angered by the civil disobedience” that occurred in response to the death of George Floyd in Minneapolis police custody.

“It was like watching Star Wars,” attorney Fred Gittes told reporters, referring to the heavily-armored police officers who responded to the protests that began in late May and continued through early June.

Attorneys like Gittes and others representing the plaintiffs acknowledged while the city endured violence and property damage during the protests, they allege that too many protesters were subjected to “collective punishment” from officers – alleging that the police officers received “minimal and ineffective training” and “responded with excessive use of force.”

Among the plaintiffs suing is Rebecca Lamey, who says she felt compelled to protest and was shot by a wooden bullet on May 31st near the intersection of Broad and High Streets. The incident was captured on her cell phone.

“I was scared. I felt violated. I still do,” she told reporters during a news conference Wednesday.

Tamara Fournier Alsaada is another plaintiff. She is also a member of Police Chief Thomas Quinlan’s advisory panel who will help guide future policy and has been a party of previous public safety initiatives with city leaders as a founder of the People’s Justice Project.

“I have spent 58 years of my life addressing this problem,” she said, fighting back tears.

Among them is an image of a man being pepper-sprayed by Columbus Police, which was heavily circulated on social media. While the lawsuit alleges that no verbal warning was given prior to the man being sprayed, police body camera footage shows that a verbal command of “deploying mace” was given seconds before the man and the crowd being sprayed as officers attempted to move a police cruiser out of the intersection.

10 Investigates attempted to ask the attorneys about this and if they feared the city attorney’s office or police may push back against some of their claims.

Attorney Ed Forman said this case is about the response to civil disobedience.

“This officer deliberately used a torture device spraying this man directly in the face. They don’t get to do that,” he said.

A spokeswoman for Mayor Andrew Ginther declined to comment and referred questions to the city attorney’s office.

In a statement regarding the lawsuit, City Attorney Zach Klein said:

“The City has yet to be served the complaint, so we’re unfamiliar with the details of the allegations at this point.

“Overall, we need to transform the culture of justice in Columbus. That’s why I’ve been working diligently on reforms to address the City’s response to the ongoing protests as well as systemic changes needed to improve police-community relations. I remain committed to working toward justice and accountability for the residents of Columbus.”

Prior to the lawsuit being filed, 10 Investigates interviewed Police Chief Thomas Quinlan last week who talked about certain cases in which use of force is required. At the time of our interview, Quinlan declined to comment on specific video clips of incidents that were emailed to the “ReportCPD” email address, which was set by Mayor Andrew Ginther’s office for citizens to turn in concerns about Columbus Police and their use of force.

According to a 10 Investigates’ review, roughly 275 people emailed the city in support of police officers and criticized Ginther. Approximately 375 emails – sent between June 1 and June 17 – alleged that officers used excessive force when responding to protesters.

According to Quinlan, attempt to use the least amount of force possible but said that there are certain situations – including crowd control – in which the use of force might be necessary.

“I’m acknowledging to you that the optics in many cases look bad. The issue is was it legal was it tactically safe, legally safe? Did the officers get it right? Or did they violate policy? I can’t make that conclusion with watching a clip of the video without having any of the other facts. I owe it to the public and I owe it to the officers to have the facts, not just a gut reaction to a video that would look bad because all use of force, I acknowledge, looks bad.”