Dr. William Husel, who worked with patients in intensive care, is alleged in a civil lawsuit to have ordered “grossly excessive” and “inappropriate” amounts of fentanyl to 27 patients at Mount Carmel West hospital. 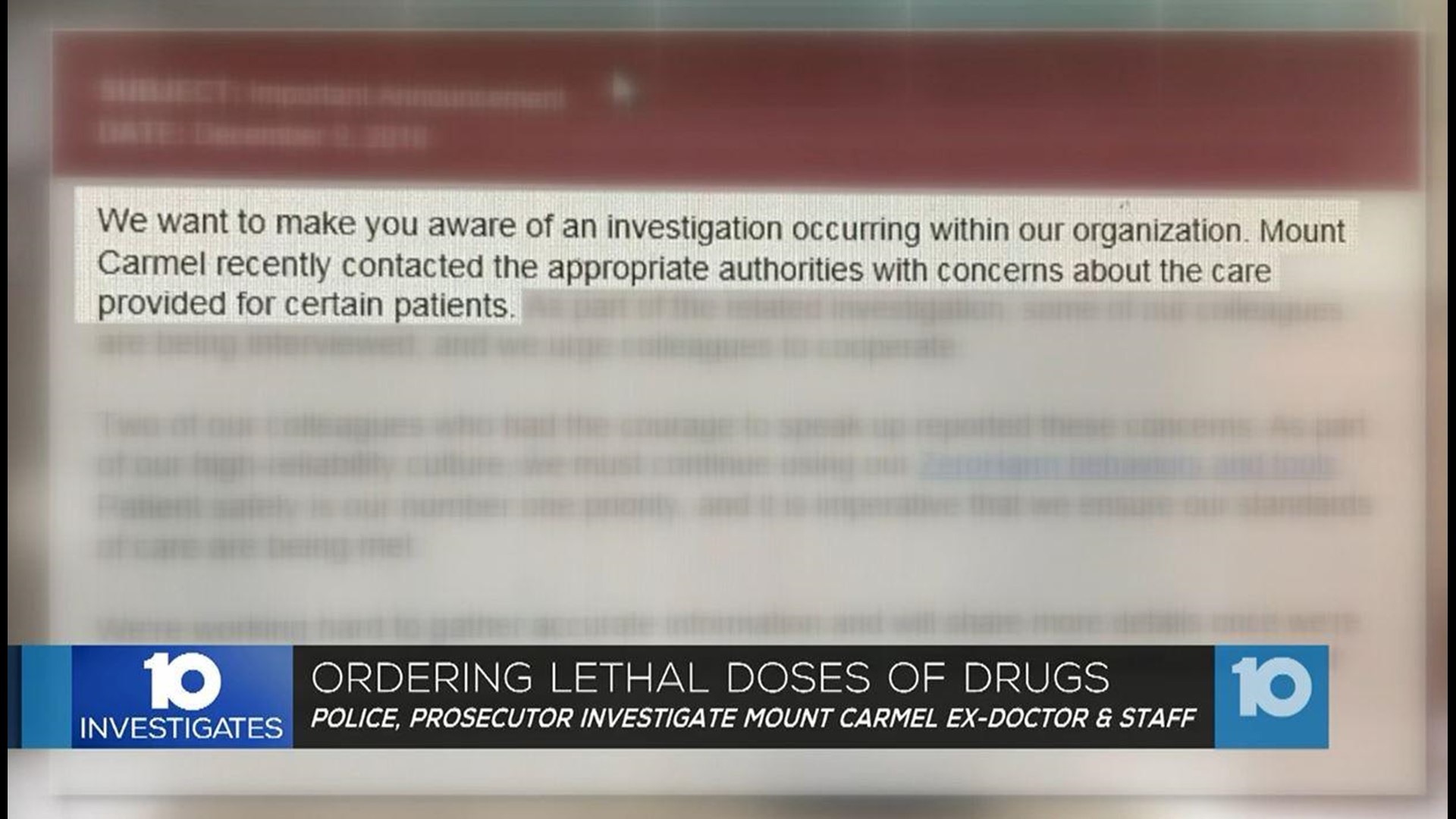 COLUMBUS – While a civil lawsuit filed Monday alleges that a Mount Carmel doctor ordered – and that hospital staff administered – lethal doses of fentanyl to 27 patients, Mount Carmel Health Systems has known for more than a month about the allegations, 10 Investigates has learned.

Dr. William Husel, who worked with patients in intensive care, is alleged in a civil lawsuit to have ordered “grossly excessive” and “inappropriate” amounts of fentanyl to 27 patients at Mount Carmel West hospital.

All 27 patients died, a hospital spokeswoman confirmed to 10 Investigates.

Husel was fired and 20 other staffers were removed from patient care while the hospital investigates.

Both the Columbus Division of Police and the Franklin County Prosecutor’s Office said Tuesday that they were notified in December “with regard to conduct by a medical employee.”

But internal memos, obtained by 10 Investigates, show that Mount Carmel only provided vague details to its 11,000 staffers about what was alleged to have gone on inside the Columbus hospital.

“We want to make you aware of an investigation occurring with our organization,” said one memo dated December 9. “Mount Carmel recently contacted the appropriate authorities with concerns about the care provided for certain patients. As part of the related investigation, some of our colleagues are being interviewed, and we urge colleagues to cooperate.

“Two of our colleagues who had the courage to speak up reported these concerns,” the memo states. It does not specify the doctor’s name.

A follow-up memo sent on December 13 stated: “Further investigation revealed that some of our colleagues may not have met our standards of care.”

It went on to state that these colleagues were “recently placed on paid administrative leave to protect the integrity and confidentiality of the investigative process.”

Sources tell 10 Investigates that the hospital’s internal investigation into the matter went back years. Husel has declined to comment. So have pharmacist Talon Schroyer and nurse Tyler Rudman, both of whom are named in the lawsuit and are accused of helping to facilitate and administer 1,000 micrograms of fentanyl to Janet Kavanaugh, an Ohio woman who died at Mount Carmel West in December of 2017.

Attorney Gerald Leeseberg, who represents the family, alleges in a civil lawsuit filed Monday in Franklin County Common Pleas court that the actions of Husel and others hastened his client’s death and that of 26 other patients.

“I don’t do criminal law but it certainly seems to fall under the category of homicide if there is an intentional taking of someone’s life without their permission,” Leeseberg told 10 Investigates. “There’s a part of me that feels badly for the hospital… they have an obligation to have controls in place and to ensure these things can’t happen.”

Ed Lamb, President and CEO of Mount Carmel Health Systems, was not made available for interviews on Tuesday. But in a video statement, Lamb apologized to the patients’ families.

“During the five years he was here, this doctor ordered significantly excessive and potentially fatal doses of pain medication for 27 patients who were near death,” Lamb said. “On behalf of Mount Carmel, we apologize for this tragedy. And we are truly sorry for the additional grief this may have caused this family.”

Lamb went on to say: “The actions instigated by this doctor were unacceptable and inconsistent with the values and practices of Mount Carmel. Regardless of the reasons the actions were taken, we take responsibility for the fact that the processes in place were not sufficient to prevent these actions from happening.”

Husel’s Facebook page says he began working at Mount Carmel West in 2013. Lamb said he primarily worked with patients in intensive care and that the hospital has introduced additional policies to “stop preventable medical errors.”

The Cleveland Clinic announced Tuesday that it was looking into Husel’s time there.

“We just learned about the disturbing accusations against our former resident, Dr. William Husel, and take this matter very seriously. Currently, we are conducting a thorough investigation and internal review of his work while he was employed as a supervised resident from 2008 to 2013. Multiple safeguards are in place to protect patients from medication errors including electronic health record alerts, pharmacist reviews of all inpatient orders and routine controlled substance audits,” the statement from the Cleveland Clinic read.

Mount Carmel has not identified the staffers who were placed on leave or the names of patients who were affected by this citing confidentiality concerns.

If you are a staffer who has more to tell or believe your loved one or family member was affected by this case, 10 Investigates wants to hear from you. Feel free to email us at 10Investigates@10tv.com.