The Ohio Department of Funeral Directors and Embalmers said Shawnte Hardin has never been licensed as a funeral director in the state. 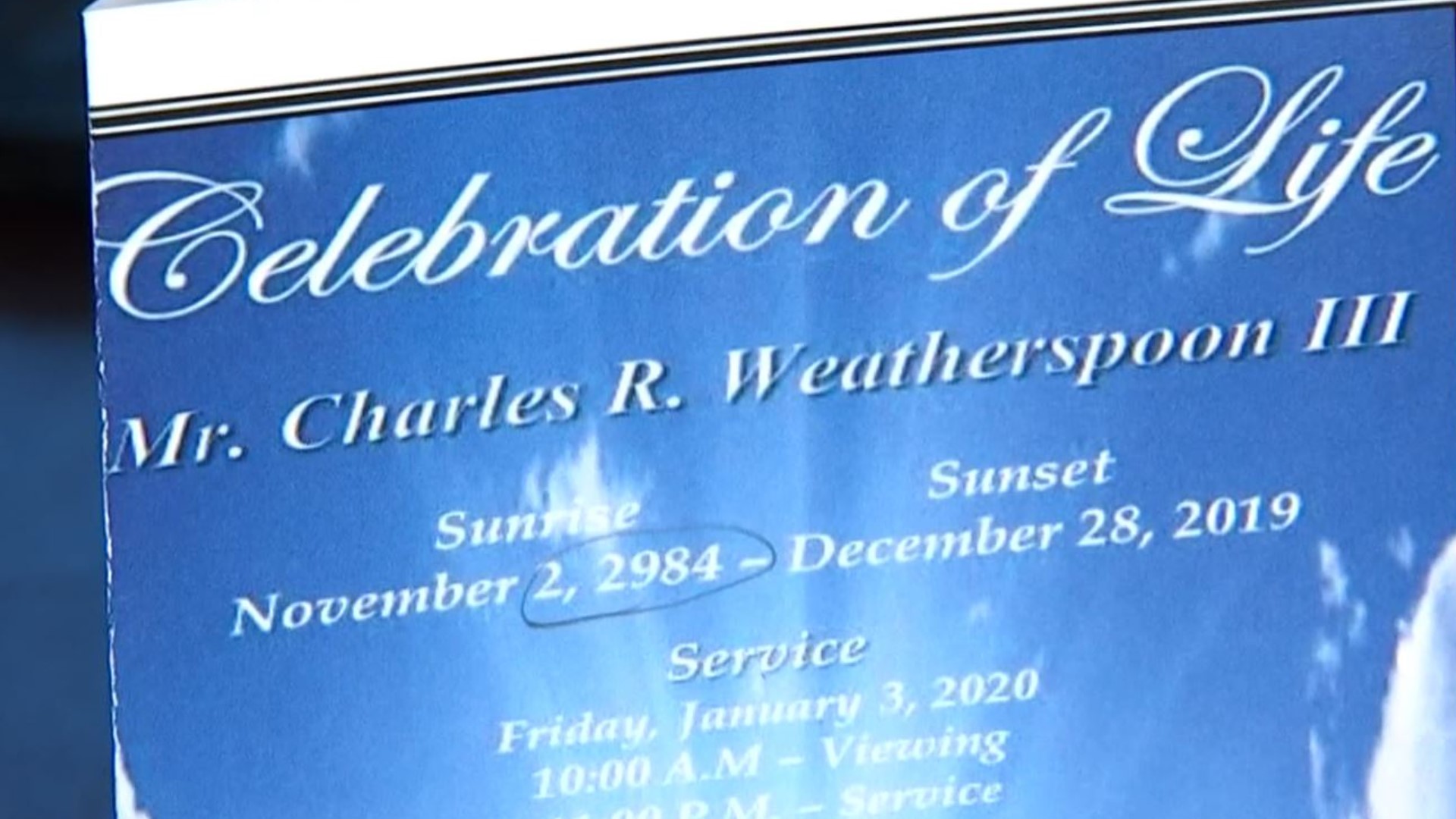 COLUMBUS, Ohio — The heartache and pain Charlotte Weatherspoon feels is a daily occurrence since her son Charles died in 2019.

Charles passed away at age 35 from a rare and undetected aorta disorder. He has no major underlying health conditions.

His mother said he managed to fight through two strokes and an eight-hour surgery, but ultimately the damage caused to his brain was too extensive.

“I had plans to bring him home, and he just did not make it. He didn’t make it,” Charlotte said. “Chuck was a funny guy, he loved making people laugh, he was always willing to help anybody.”

In an instant, his grief-stricken family was left with a void, forced to plan a funeral.

With no life insurance and limited cash to carry out Charles’ wishes of being cremated, someone referred his family to a man named Shawnte Hardin.

“He did not say I’m a concierge, I cut hair, faces, do makeup – no. He said he was a funeral director, he had his own business,” Charlotte said.

She identified it as Celebration of Life Memorial Chapels. A post from 2016 on the Facebook page for the business says funerals “cost less...about 50% less than traditional funeral homes.”

With hopes of carrying out her only son’s final request, Charlotte signed a contract with Hardin totaling $2,050.

“He harassed me about calling the doctor to get him to release the body. He gets the body, it takes him two weeks before he can get him prepared. He played the wrong music. My programs were messed up. It took him almost 30 days to get my ashes back. It was a disaster," Charlotte said.

Charlotte contacted 10TV anchor Andrew Kinsey after seeing a report about someone tipping off Columbus police to two bodies inside a vacant hair salon on Livingston Avenue.

That discovery led to an investigation involving the same man who handled Charles' body, Shante Hardin.

Hardin admitted to 10TV reporter Kevin Landers that he stored embalmed bodies inside the building after the investigation broke.

“I’ve become a target of the Ohio Board of Embalmers and the funeral establishment, and they continue to use the Ohio Attorney General against me,” Hardin said.

As 10 Investigates first reported, this is not the first time Hardin and his business practices have come into question. BCI says this investigation is ongoing but won’t say how long they've been looking into him.

The Ohio Department of Funeral Directors and Embalmers said Hardin has never been licensed as a funeral director in the state.

But he doesn’t have to be for the type of business he said he’s operating.

"That's not what we do. We are a mortuary support service where we help funeral homes,” Hardin said.

We found that same explanation in fine print, inside one of Hardin’s service guides, which is given to families when selecting arrangement packages.

“Did he ever say the words – ‘I am a funeral director?’,” Kinsey asked Charlotte.

Charlotte said she hasn’t had a chance to process her grief due to questions now swirling in her head about who she trusted during her darkest hour.

“It’s devastating me. Losing my son was enough. This is too much. Nobody said this follows losing your son, that you get swindled. I would have took him outside and buried him in a garden. Who did I give him to? Who did I give him to? I gave him to a stranger. I don’t even know if those are the ashes of my son,” Charlotte said.

The grieving mother now questions, whether the ashes dropped off at her front doorstep, are actually those of her son.

“The cremation people say they are his, but there is a tag missing, that should be on there and it is not. How do I know those are my ashes? I need my ashes tested,” Charlotte said.

Now, she said she wants lawmakers to make changes.

“I find it hard to believe that you can move around, and deal with people's loved ones – and bodies and all that comes with that, with no credentials. How does that happen?” Charlotte said.

She wants better oversight and stricter penalties on those allowed to transport and handle the dead. She thinks that oversight is overdue to ensure other families, aren’t taken advantage of like she was.

Charlotte said she regrets not having life insurance for her son, and not researching Hardin before signing a contract with him.

We reached out to the third-party funeral home that cremated Charles. They confirmed records with the family that shows the remains in the urn are correct. They plan to send out a replacement tag for the tag that was missing and say they have cut all ties with Hardin.

Hardin is not charged with any crimes. His attorney, Bob Krapenc, tells us he cannot comment on Weatherspoon’s accusations.