Failure to Protect: The violent past of Reagan Tokes’ accused killer (Part 1)

10TV’s Jerry Revish takes us inside the case and the violent past of her accused killer, Brian Golsby. 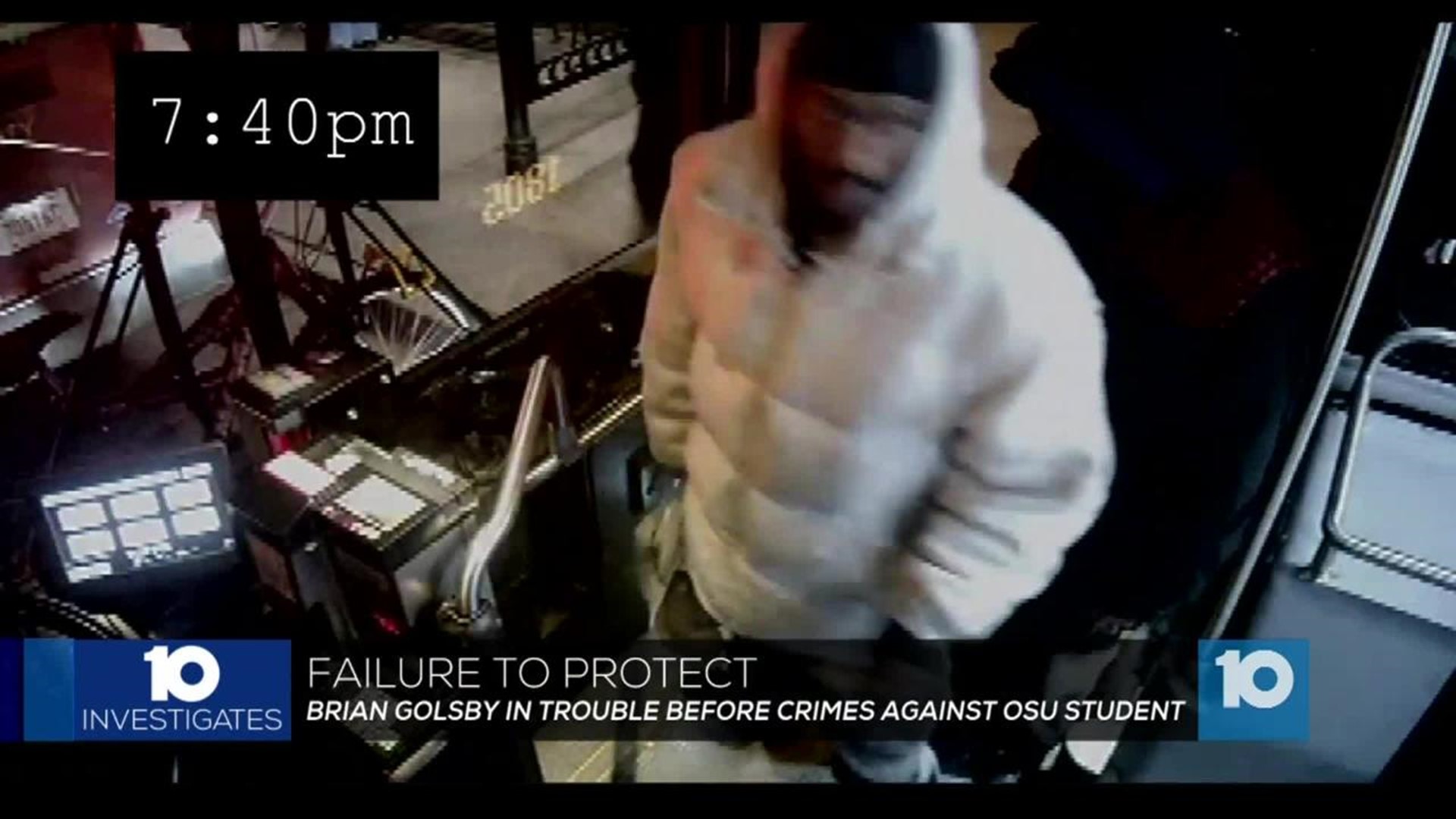 Reagan Tokes was a 21-year-old Ohio State University student living a life filled with promise. But it was tragically cut short when she was kidnapped, robbed, raped, and murdered earlier this year.

The suspect is 29-year-old Brian Golsby. A man who was in trouble long before being arrested for the crimes against Reagan Tokes. Golsby has a long history of violence, and to get a sense of the failure in the system, we first have to go back to the beginning.

As a juvenile, Golsby racked up a list of offenses we've obtained through court records. Those offenses include:

Then in 2010, court records show Golsby robbed Sheila Merwin and held her against her will outside her Grove City apartment. She told 10 investigates she remembers it like it was yesterday.

As Merwin walked up to her mailbox, Golsby – who approached her on a bicycle – put his hand around her throat and said, “Give me your money.”

Merwin said, "I begged him not to take my purse, you know there's so much in there. He let me keep it and he just had me get the money out. I gave him $84.”

Two weeks later, court records show Golsby held a knife to a young mother. He forced her to drive to an ATM with her two-year-old in the car. Once there, he forced her to pull out cash and to perform oral sex.

"She did not want to testify, which I totally understand,” Merwin explained. “And that's why he got the short sentence and the plea deal."

Because of that, the cases were combined. Golsby reached a plea deal on those attacks and spent nearly six years in prison for robbery and attempted rape. And, as a Tier 3 sex offender, he had to register with the state for the rest of his life. It was just the latest in a crime career that started at age 14.

His prison time was also riddled with trouble-making. He was shuffled to five different prisons because he was constantly getting in trouble. Some of his 52 infractions included:

Despite that, in November 2016, he was released on post release control…with conditions.

The special condition that didn’t deter him

Through public records requests, 10 Investigates obtained an email from the Ohio Department of Rehabilitation and Correction that suggested Golsby be placed on GPS monitoring. This was a special condition because he was going to be released homeless.

A device was strapped to his ankle, but Franklin County Prosecutor Ron O'Brien confirmed to 10 Investigates that tracking that device did not happen.

In a press conference, O’Brien explained that on the evening of February 8th, 2017 - the night of Reagan Tokes’ rape and murder - Brian Golsby was trolling streets in the Short North.

O’Brien said, “(He) just crisscrossed the neighborhood down around Fifth and High, down Summit, down some of the side streets east of High.”

At 9:45 pm, we now know that Golsby was outside of Bodega right as Reagan Tokes was getting off work. Court records suggest that while he was on the prowl that night, he came across Tokes, and that’s when Franklin County Prosecutor Ron O’Brien says Golsby abducted her as she tried to walk to her car that was parked at E. 3rd Avenue and Mt. Pleasant.

At 10:03 pm, prosecutors say Golsby forced Tokes to withdraw $60 dollars from a Chase Bank ATM on South High Street. And then just before midnight, Golsby is accused of shooting Reagan Tokes to death and dumping her body at Scioto Grove Metro Park.

Two days later Tokes’ 1999 Acura was found in the 700 block of Oakwood Avenue. Golsby's DNA was retrieved from a cigarette butt found in the car. He was arrested the next day at a house on Forest Street.

Because of his arrest, Golsby's ankle monitor was finally checked The data recovered reveals his location at the scene of many more alleged crimes:

“I was really shocked to find out that that really isn't watched at all, until after the incident. That shocked me,” Merwin said. “It really saddened me because Reagan would still be with us. You know, at least there would have been a lot closer surveillance of him. And you know, it really sickened me that that would happen."

Who was watching him?

A proven, violent offender was released from prison and under the supervision of the Adult Parole Authority. But who was watching him? Who was responsible for monitoring that electronic device strapped to his leg?

Was it Alvis; an ex-offender reentry agency that receives state funds to help rehabilitate and watch offenders? The agency’s COO, Phil Nunes, said no.

“We also have to determine whether or not we think that we can, in an appropriate way, treat somebody. And in his case for, example, we rejected his case," Nunes explained.