Buckeye Environmental Network said in the past year they had three meetings with ODOT to express their concerns. 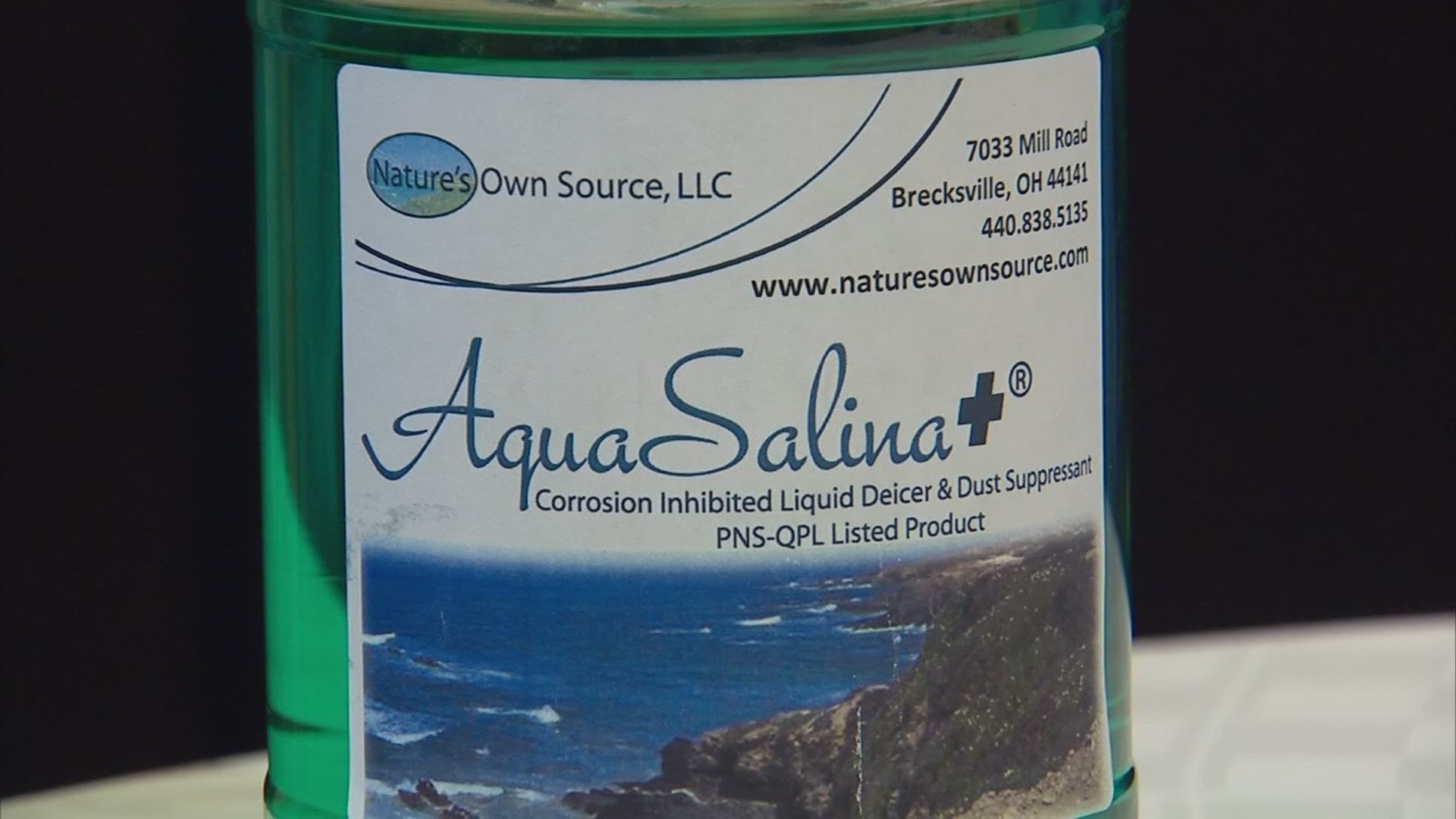 A year after a 10 Investigates report, environmental watchdogs in Ohio say they still want to ban at least one de-icing product and certain types of brine from oil and gas drilling from being used to treat Ohio roads – citing concerns about their radioactivity.

Roxanne Groff with Buckeye Environmental Network told 10 Investigates on Tuesday that in the past year her group has had three meetings with the Ohio Department of Transportation to express their concerns.

Groff said ODOT “was listening” to their concerns.

The maker of AquaSalina says the de-icing product is less corrosive than road salt and more effective at melting ice in really low temperatures.

Historically, ODOT has used the product as an additive to the road brine it makes when temperatures dip well below 20 degrees – where traditional road salt is not as effective.

Data provided to 10 Investigates for our initial report in February of 2020 showed between 2018 and 2019 ODOT reduced its use – telling us at the time that the reduction had nothing to do with the criticism from environmental groups.

Receipts and invoices from 2018 and 2019 show the Ohio Department of Transportation has spent thousands of dollars on AquaSalina.

On Tuesday, 10 Investigates asked for updated figures on the use of AquaSalina by ODOT in the past year. A spokesman said he would get back to us. We will keep you posted when we learn more.

We also left a message seeking comment from Dave Mansbery, the owner of Nature’s Own Source, the manufacturer of Aquasalina. We were curious about his thoughts on the environmental group’s continued opposition to his product.

10 Investigates spoke to a person at Nature’s Own Source on Tuesday, who said she would leave a message for Mansbery.

For our report that aired last February, Mansbery told 10 Investigates: “I think we have a very safe and effective product that’s good for the traveling public.” During our interview, he told us that he believes the product is less corrosive than road salt and more effective and melting ice in really low temperatures.

Mansbery told 10 Investigates last year that he feels environmental groups are harping on the oil and gas industry and that lots of other products have naturally occurring radioactivity from bananas to brazil nuts to raw meat and granite countertops.

In an interview with 10 Investigates Mansbery said of his product: “predominantly we are in the low to moderate range. Every well is different and you have variations. But ODH stated very clearly there is a negligible risk to the public.”

A 2019 study conducted by the Ohio Department of Health found that conventional well brine poses a negligible radiological health risk to the public.

So why does an environmental group still oppose it?

While AquaSalina is a finished commercial product, it began as leftover wastewater or “brine” from oil and gas drilling.

The Ohio Department of Natural Resources has produced conflicting studies on its radioactivity.

An initial 2017 study by the Ohio Department of Natural Resources found that AquaSalina's combined Radium levels were 300 times higher than the maximum allowable level of radium in drinking water.

But a follow-up study in 2019 found the process "to produce AquaSalina from conventional oil and gas production brine does not cause…" the radioactivity to increase. A state study also found that the average combined radium levels found in AquaSalina ranged from 2500 to 3500 picocuries per liter.

For context, the EPA’s maximum contaminant level for combined radium in drinking water is 5 picocuries per liter.

Ohio is one of 13 states that allow for the spreading of raw conventional well brine – leftover wastewater from oil and gas drilling – to be used as a de-icer in the winter and as a dust suppressant in the summer, according to a 2018 study from Penn State University.

ODNR officials confirmed to 10 Investigates that Ohio does not test for radium levels prior to oil and gas well brine from being spread.

In 2019, the Ohio Department of Natural Resources completed its studies on the radioactivity in oil and gas wells in 27 counties where they discovered combined radium levels between 54 to 9500 picocuries per liter.

In order to spread oil and gas brine in Ohio, local municipalities must pass a resolution authorizing its use.

According to records from the Ohio Department of Natural Resources, 33 counties have passed such resolutions.

While 10 Investigates reviewed records dating back to the 1980s showing hundreds upon hundreds of barrels were spread each year in some counties, some of the records we reviewed were incomplete or lacked specificity about where the brine was applied.

Groff said she would like to see the legislature take up the issue, but that hasn’t come to fruition.

A professor at Penn State University who has studied the issue told 10 Investigates last winter the use of brine from oil and gas drilling is something that merits further study.

Dr. Travis Tasker is with Saint Francis University. While at Penn State University he was one of several scientists who published a 2018 study that found that "radium levels will accumulate in roads following spreading events but likely at concentrations below regulatory standards.”