Liz Spellman said she was placed on administrative leave and later fired after the October 25th incident. 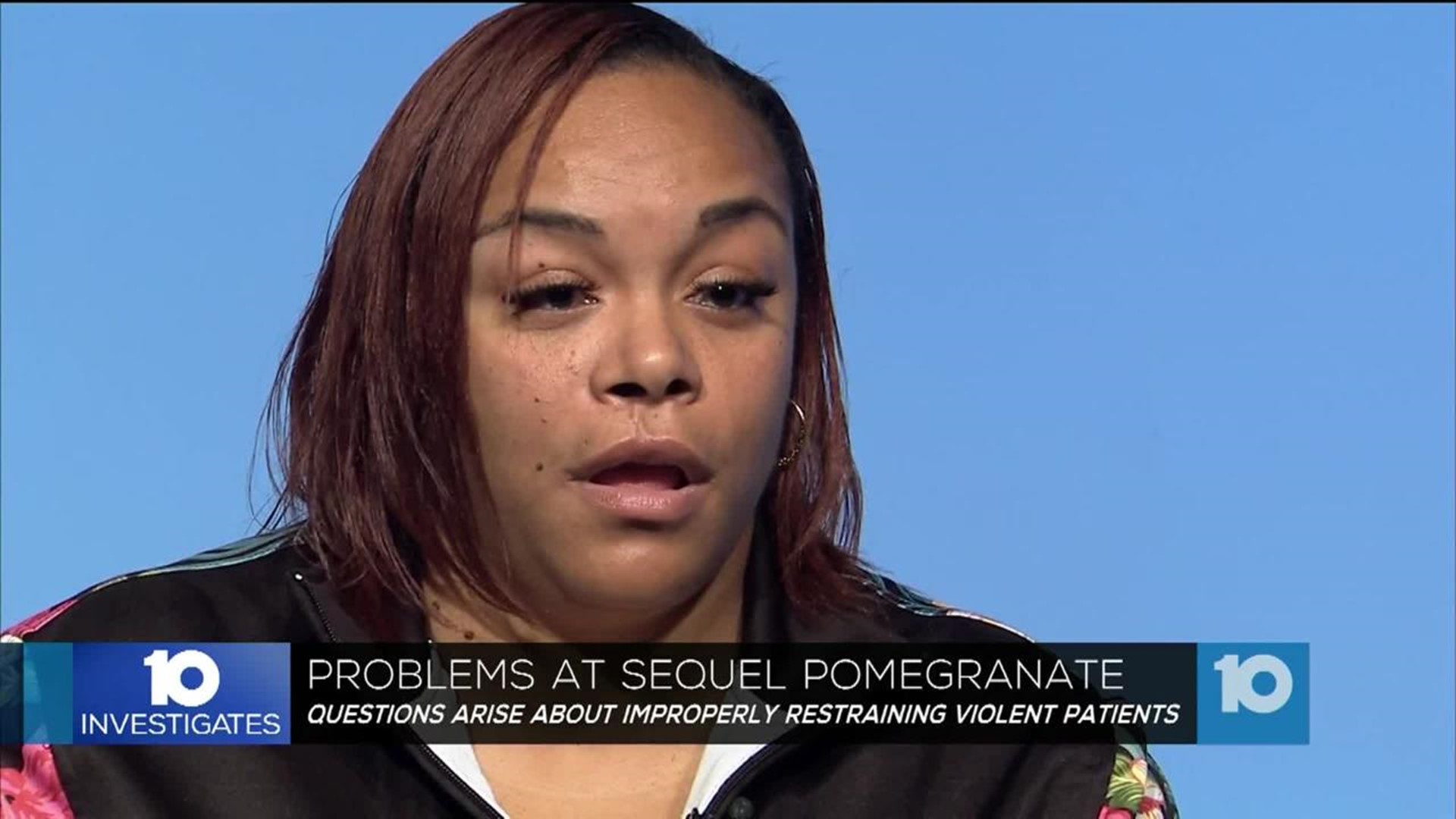 COLUMBUS (WBNS) – A mental health associate is disputing a state-issued report that alleges she laid on top of a teen and later shoved the child after she was improperly restrained inside Sequel Pomegranate.

Liz Spellman said she was placed on administrative leave and later fired after the October 25th incident.

A four-page letter sent to Sequel Pomegranate by the Ohio Department of Mental Health and Addiction Services also alleges that a nurse at the psychiatric facility for teens kicked and punched the teenaged girl while she was being restrained. Another nurse is accused of failing to render aid.

The child is only identified by her initials in the report.

In wake of the incident, the Ohio Department of Mental Health and Addiction Services is considering suspending patient admissions and weighing whether to revoke the license for the acute hospital portion of Sequel Pomegranate, which has about 20 beds. (The residential unit, which has about 70 beds, was found by the state to be in compliance with its standards).

In an interview with 10 Investigates this week, the former mental health associate at Sequel Pomegranate, Liz Spellman, said that she disputes the characterization made by the state-issued report.

“I can't help what that nurse did or what happened. That's not me. That's not what happened when I was restraining her. When you are sitting here and you have a youth that is tugging, and doing all that you fall to the ground. I am sorry I don't know what you wanted me to do? If I fell on top of her falling to the ground – I did – but I don't recall all that. There's no way. I've never been accused of harming a youth or being improper restraint and I am not perfect at the restraint,” Spellman said.

Spellman told 10 Investigates on October 25, she and other staffers were attending to another incident inside Sequel Pomegranate when they were alerted to another issue involving a female on the acute psychiatric side of the building.

Spellman said she and nurse Valencia Simpson were attempting to break up the girl and another teen when they began to place one of them in a restraint hold.

“So then we went to restrain her and we could not restrain her. The way we had her we had her almost on the table to where we felt was improper so we was like we have to take her down.

As we went to go. I cannot say I did not lay on this child but I may have fell as we all fell to the ground but I immediately got into a position that I know to try to stop her from harming us or getting up to harm other youth,” Spellman said.

Spellman went on to say that once on the ground, she eventually got up and left to go help another staffer secure other teens in the acute unit. She says she did not see the nurse strike the patient. Once she returned, Spellman says she left again when the teen began being violent toward her.

Spellman: “Everything happened so fast when we went down but Nurse Simpson is not violent. She is not violent.”
10 Investigates: How would you characterize her as a nurse?
Spellman: Great. She will go to codes. She will try to de-escalate situations the best that she can. I liked working with her.

During the interview, 10 Investigates asked Spellman to address the other allegation, that she is alleged to have shoved the child.

10 Investigates: What about when they said you grabbed this resident’s hair put her against the concrete block wall of the hallway?”
Spellman: “No I did not. She had my hair, I pushed her off … I am trying to get her off of me along with two other staff.”
10 Investigates: “Is this is when she had the broom?”
Spellman: “Yes, when she came at with the broom I did push her like they taught us put your arm out and push them away from you. But she still has the broom trying to swing it at me.”

In an email sent to 10 Investigates on Friday, Valencia Simpson criticized 10 Investigates’ reporting on Sequel Pomegranate which chronicled dozens of incidents of violence and alleged sexual abuse.

Simpson went on to say that Sequel Pomegranate takes in children other facilities won’t and later acknowledged, “I admit I made a huge mistake, a mistake that I regret immensely."

Her status of employment was not immediately clear. Simpson did not respond to an email message prior to news time Tuesday.

10 Investigates’ reporting this summer prompted Governor Mike DeWine to have OHMAS Director Lori Criss tour the facility. She declared it to be “safe, clean and therapeutic.” But the state also began a series of surprise visits to the facility and, in August, raised concerns about how children there were being restrained. Staffers there went through re-training as a result.

10 Investigates asked Spellman about this retraining.

10 Investigates: “The state is essentially saying here what happened were improper restraints and beyond that – assaults on this child . You are disputing that?”
Spellman: “Yeah. Improper restraints happen every day in there.”
10 Investigates: “But should they?”
Spellman: “No they shouldn’t. They should make up their minds about how they want us to restrain these kids and what they want to do. They tell us to do one thing – we do it – ‘oh you shouldn’t have did it like that.’ How can something come out proper when a youth is attacking you?”

Spellman also said that her firing was improper and made allegations that other staffers have been accused of improper holds but were allowed to remain on the job.

10 Investigates found at least a dozen claims against staffers but many of those were unsubstantiated. Our review of Franklin County Children Services records also found that since 2015, at least 22 staffers have been fired or retrained because of improper restraints.

10 Investigates did not hear back from the state or Sequel Pomegranate prior to news time Tuesday.