As the heroin epidemic continues to reach staggering levels in Ohio, more children are being caught in the crosshairs. 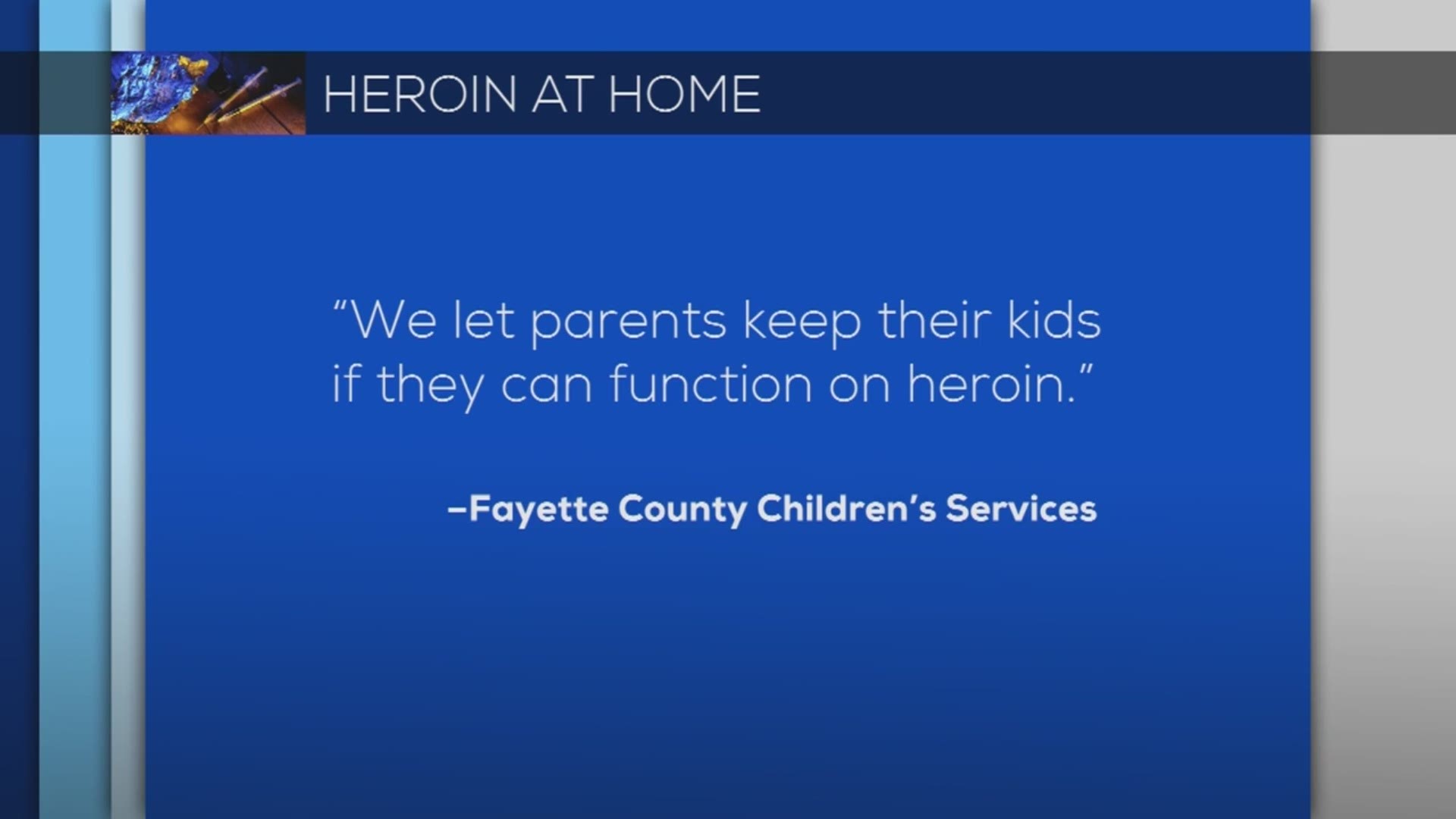 A recording obtained by 10 Investigates calls into question just how effective Ohio’s county agencies are in protecting children from the ravages of heroin-addicted parents.

Matthew says he was shocked to hear what a Fayette County Children’s Services case worker said while discussing a custody situation involving his daughter.   10 Investigates is withholding his last name to protect the identity of his child.  “We let parents keep their kids if they can function on heroin,” the case worker told him.

The statement was made in a nearly 13 minute long phone conversation that focused on allegations that Matthew’s daughter was being forced to live in a home with marijuana present. There were no allegations involving heroin, despite the comment made by the case worker.

Children Services is supposed to be the ultimate protector of children in the state of Ohio.  "They're enabling people to break the law. They're enabling all those kids to be put in danger's way," Matthew said.

“The statement she made is correct, in that you can't move a parent's child from them unless you can show it's having a negative effect on the child," he said.

That statement set off a 10TV investigation, determining whether counties are doing enough to keep children safe from the ravages of heroin at home.

When it comes to Ohio’s counties, experts in the field say it is a matter of “haves” and “have nots” in resources for children’s protective services. In recent state budgets, state funding for county children’s services has decreased while the burden has shifted to the counties to fund their own children’s services.

That is a large reason why case workers in Fayette County manage about 20 children each, instead of 12 as recommended by the Ohio’s Department of Job and Family Services.

So the attention – and time – case workers can devote to making sure children are safe in the homes of addicts depends, in part, on where the child lives. Caseloads range from as low as nine in Morgan County to 22 ongoing cases per-worker in Highland County.

“The resources are extremely limited. Ohio is ranked 50th in the United States for providing state support for child protective services.  We can double the amount of state support going to child protective services and we'd still be 50th per capita in the United States," said Joel Potts, executive director of the Ohio Family Services Directors Association.

State officials argue the state ranks higher on other scales, including being 4th in the nation for overall spent on child welfare.  Ohio spends more than $1 billion dollars on protective services once federal, state and local dollars are totaled; state officials say about $87 million of those dollars come from the state.

Why Children Remain In Heroin Homes

Many experts who deal with heroin addicts agree:  parents who use heroin can’t effectively parent at the same time.  So 10 Investigates wanted to know why children are being left in homes with heroin present.

Parental drug use is a factor in deciding whether to try and take children out of a home - but it's not an automatic disqualifier.

“Children's services does not have the authority to remove a child. What we are charged to do is to assess for safety and future risk to children's safety,” said Franklin County Children Services Intake Director Lara LaRoche.

“It's a matter of collecting evidence through the assessment process, presenting that to the court, and ultimately, the court will make a decision,” added LaRoche.

The judicial process could take weeks or months. By that time, the damage to children may already be done, said Brenda Stewart, who leads Addicts Parents United – a support group for parents of addicts.

“They were constantly dirty with severe diaper infections and rashes. They were unable to cope with crying. I discovered severe bruising on my grandson with a black eye," Stewart said.

Members of the group wanted the public to hear the plight of children left in heroin homes.  To read excerpts of their story click here.

“I don't think being active on heroin, you can probably function as a parent,” said Judge Preiss.

More than 80 percent of cases in the court are due to heroin addiction, she said.

“We're really trying to break the cycle of addiction and we always have. It's just now, this addiction these children are seeing is an addiction to heroin and some of them know what needles are. Whereas a generation ago, they saw their parents with pills and bottles.”

56 of Ohio’s 88 counties now have some form of drug court program – starting with Franklin County, according to court records. Fayette County, where the call initiating this 10TV investigation came from, is not one of those counties.

Efforts to have the state boost their funding have failed so far, said State Senator Charleta Tavares, D-Columbus.

“The last budget, I attempted to add $20 million to the Child Welfare line item, which would help to reduce caseloads, about $15 million of that $20 million would have helped to reduce caseloads, again to be the financial partner with our county children's services agencies. $5 million would have been set aside for those hardship counties, those counties like Fayette County that do not have a children's services levy,” Tavares said.

The measure did not get enough support from Republicans and the governor, she said.

“We say in one breath that children are out greatest resources, our greatest asset. It's our responsibility to protect them. But that's on one side. And then on the other side when it comes to practice in front of our children, to do what is right for our children, we somehow find no resources to help them,” the senator said.

Tavares said she isn’t giving up and plans try to try again.

Viewers who watched Thursday's 11 investigation: Heroin At Home are asking for a family support group. Here's the...