It reportedly would include more teams in an extended playoff format, full prorated pay for players and every game would have the designated hitter. 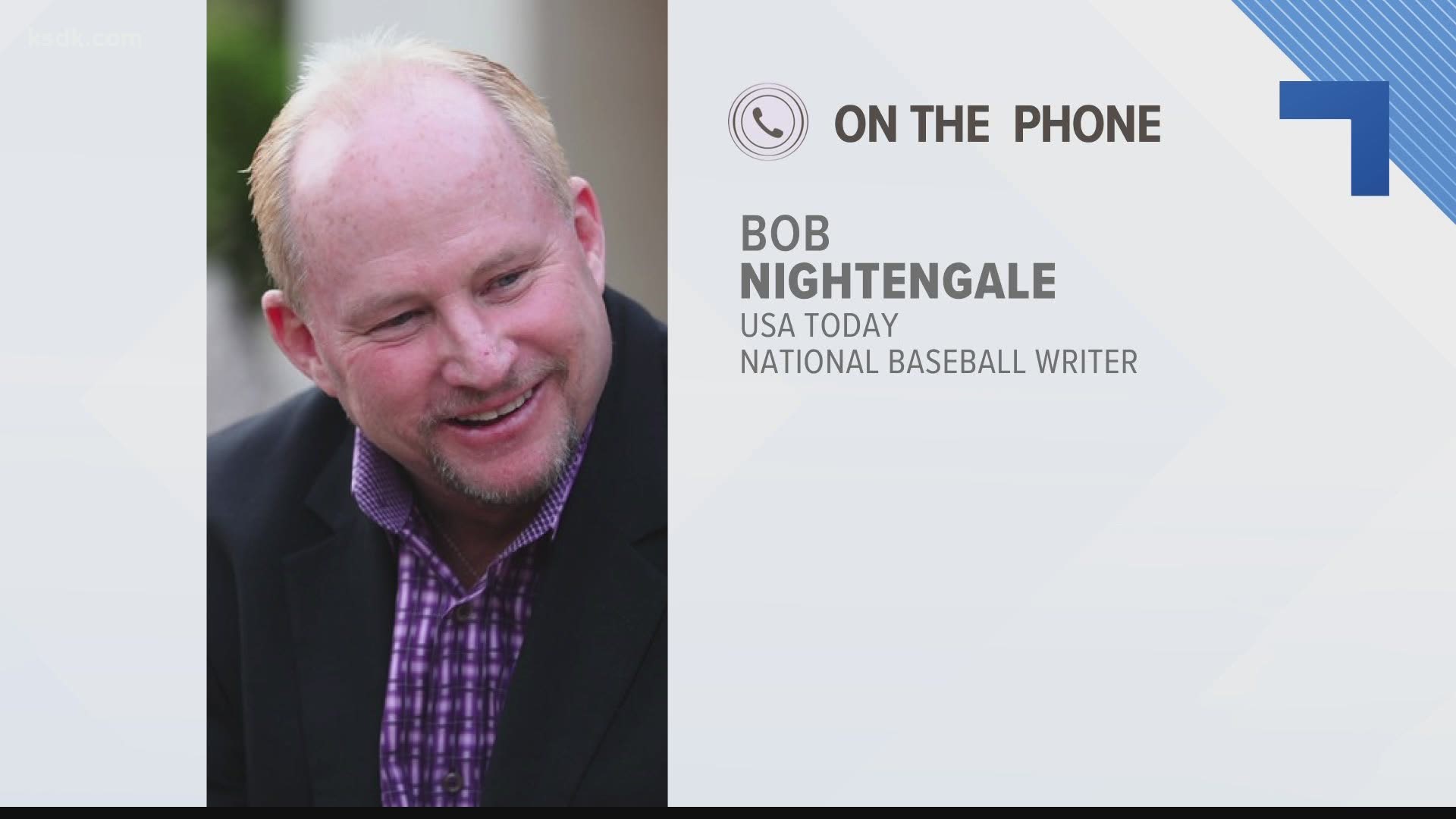 NEW YORK — After days of angry exchanges over money between Major League Baseball and the players' association, Commissioner Rob Manfred started to doubt whether there would be a 2020 season and said as much on national television.

He then called union head Tony Clark and offered to fly from New York to Arizona to meet for the first time in three months. They spoke one on one for several hours Tuesday in a room at The Westin Kierland Resort & Spa in Scottsdale and emerged with what MLB considered a framework for each leader to sell to his side.

MLB thought it had terms to play the pandemic-delayed season in empty ballparks, not just a proposal.

The union said nothing publicly and staff conferred with the eight-man executive subcommittee and other players. Some on the players' side considered the framework merely another plan subject to more bargaining.

The framework includes full prorated pay, even if games are played in empty ballparks, people familiar with the details told The Associated Press. They spoke on condition of anonymity because details were not announced.

Each team would play 60 games over 10 weeks starting July 20, though a Sunday opener on July 19 could be added. The framework would result in players receiving about 37% of their salaries and would come to roughly $1.48 billion from salaries originally totaling $4 billion.

Baseball's postseason would expand from 10 teams to 16 this year, and the two wild-card games would transform into eight best-of-three series. That would create a minimum of 14 new playoff games whose broadcast rights could be sold, and MLB would have the option of 14 or 16 postseason teams in 2021.

MLB would guarantee a $25 million postseason players' pool, creating postseason shares for players in the event no tickets are sold.

The designated hitter would expand to all games for the first time, also involving games between National League teams, for 2020 and 2021.

The luxury tax would be suspended for 2020, saving money for the Yankees, Astros, Dodgers and Cubs.

Both sides would contribute jointly to initiatives for social justice.

Players with so-called split contracts, who get paid at a lower salary rate when sent to the minor leagues, would not have to repay the advance they already received: $16,500, $30,000 or $60,000, depending on their contract, for a total of about $33 million.

“At my request, Tony Clark and I met for several hours yesterday in Phoenix,” Manfred said in a statement Wednesday. “We left that meeting with a jointly developed framework that we agreed could form the basis of an agreement and subject to conversations with our respective constituents.

“Consistent with our conversations yesterday, I am encouraging the clubs to move forward, and I trust Tony is doing the same,” Manfred added.

The union's last offer on June 9 was for an 89-game schedule at full prorated pay, which would result in 55% of salaries and about $2.2 billion.

The union also would waive additional claims that could cause an expensive grievance.

Manfred and Clark got into such detail during the meeting they recessed for a period to allow Manfred to consult owners on MLB's labor policy committee.

After considering the framework, players could counter with a higher amount of games, perhaps by adding doubleheaders.

Before this week, Manfred and Clark had not met since March 13-14 in Arizona, the two days after spring training was suspended due to the new coronavirus.

Manfred maintained last week he was “100%” sure there would be a season, but following angry exchanges last weekend he said Monday “there’s real risk” of no season at all.

Baseball deteriorated into labor strife while the NBA, NHL and MLS have moved forward with restart plans.

While baseball had eight work stoppages from 1972-95, the sides have negotiated four straight labor contracts without interrupting play. But tensions have increased in recent years, with the union losing a grievance accusing the Chicago Cubs of manipulating third baseman Kris Bryant's service time to delay his free agency and filing a grievance accusing several clubs of failing to properly use their revenue sharing money.

Players have accused several noncompetitive teams of “tanking." Clubs say they have the right to jettison veterans and redirect resources to rebuilding.

And the average salary has remained in the $4.4 million range for five straight seasons, stagnating after Clark led his first labor negotiations as successor to the late Michael Weiner.

Amid that backdrop, and with the prospect of collective bargaining to replace the current labor deal that expires on Dec. 1, 2021, tensions ratcheted up when the virus struck.

The sides reached a deal on March 26 that called for players to receive prorated pay, $170 million in salary advances and a guarantee of service time even if no games are played this year. In exchange, players waived claims for additional pay, giving up a right to test whether Manfred could successfully invoke the provision in Uniform Player Contracts allowing him to suspend those contracts during a national emergency.

When it became apparent the season would have to start in ballparks without fans, MLB told the union on May 12 that teams would combine to lose $640,000 for each additional regular-season game, claiming 40% of revenue is gate and gate-related. The union challenged MLB's figures and asked for additional documentation.

MLB then made its first economic proposal May 26, offering an 82-game schedule and saying additional pay cuts were needed. Players refused to entertain additional cuts and asked for 114 games. MLB moved to 76 games and then 72 last week, reworking the finances but still refusing full prorated pay. While the union wants to extend the postseason into November, MLB says it fears a second wave of the virus in the autumn would jeopardize $787 million in broadcast revenue.

Players cut off talks Saturday, a day after MLB’s last proposal, and said additional negotiations were futile. Players told MLB to unilaterally set the schedule but Manfred said MLB would not while there was a threat of a grievance.