Columbus Health Commissioner Dr. Mysheika Roberts says the list was only open to the public for two days. 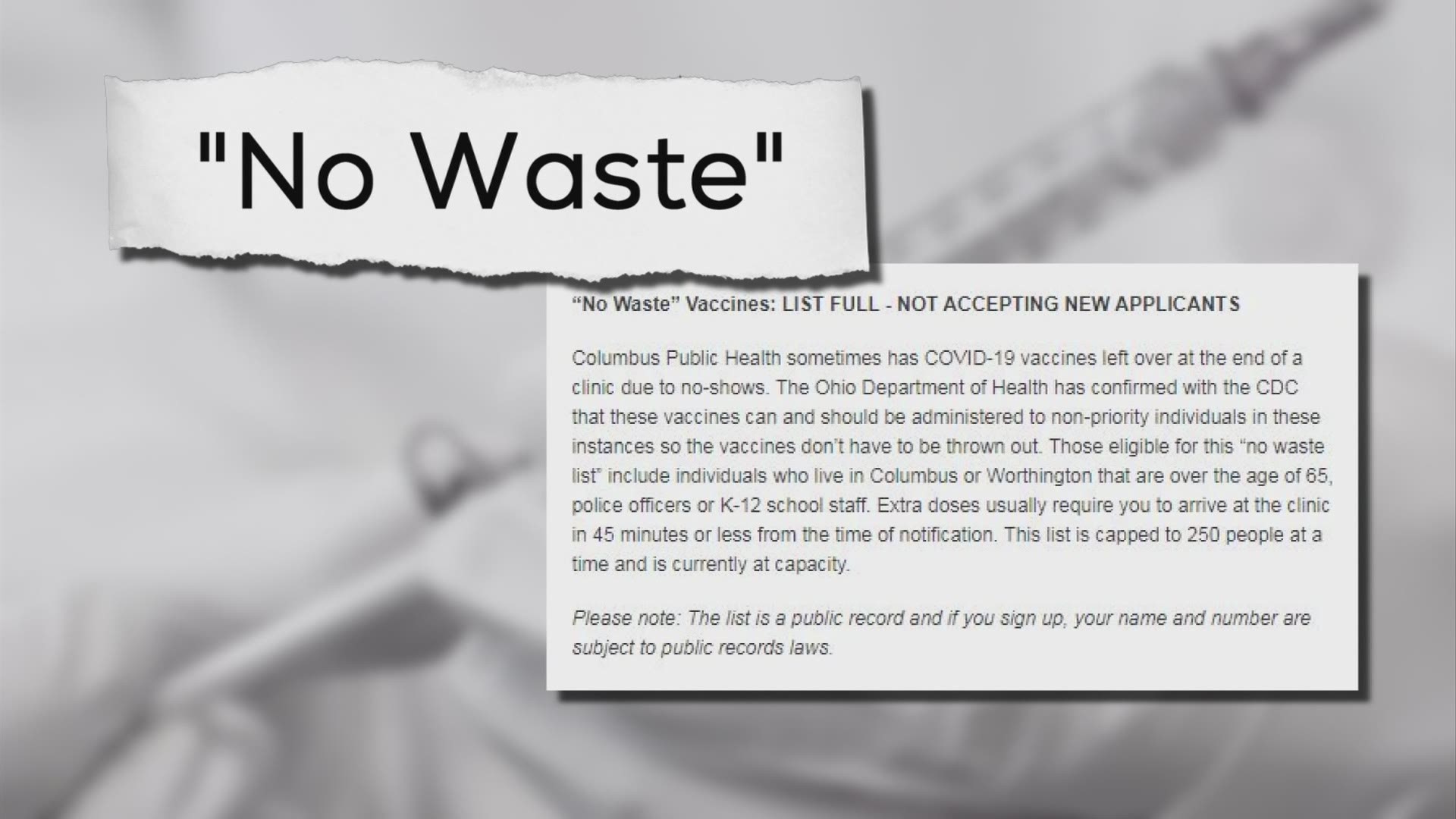 COLUMBUS, Ohio — About 50 people who were not expected to receive the COVID-19 vaccine this early got it because they were able to sign up on a list that few people in the city knew about.

The "no waste list" was designed by Columbus Public Health to ensure that unused vaccines didn't go to waste.

But while its intentions may have been in the right place, it also raised concerns about whether it was fair.

“I would hope people would not think we were deceptive in any way. We were trying to get the vaccine to as many people and that's what we were trying to accomplish, “ says Columbus Health Commissioner Dr. Mysheika Roberts.

An explanation of the "no waste list" on the health department webpage states in the event of unused vaccines, "the Ohio Department of Health has confirmed with the CDC that these vaccines can and should be administered to non-priority individuals.”

The website says those eligible for the list include people who live in Columbus or Worthington that are over the age of 65, police officers or K-12 school staff.

That means anyone who is available to get the shot when they are called gets it, even if they were not on the state's priority list.

“I can see why some people may feel that way, but I also would hope that people would understand that Columbus Public Health was doing its best to make sure as many people were vaccinated in our community and to make sure we didn't discard any of the vaccine,” Dr. Roberts said.

Dr. Roberts says the list was only open to the public for two days in January. By the time it closed, 250 people signed up.

“There was a period of time when we opened it up to the public and did not put any criteria to it," Roberts said, admitting it was a misstep to do that.

Roberts says the list needed to be created after unused vaccines couldn’t be put into the arms of health department staff who didn’t want to take the shot.

She said the city needed a list of people who wanted the shot and who could get to the fairgrounds in 30 minutes if they were called between the hours of 3 p.m. and 5 p.m.

Dr. Roberts admits changes are coming the next time the list goes public.

Columbus Mayor Andrew Ginther issued a statement about the no waste list saying:

"In the three weeks that Columbus Public Health has been giving vaccines, 6,164 people in tier 1A have been vaccinated and fewer than 60 have been have been given vaccines to keep them from having to be thrown out. The challenges CPH faces in providing vaccines to as many people as possible in the tiered system is being experienced across the country. Dr. Roberts and her team are to be commended for their continued work to ensure no vaccine is wasted and to bring an end to the suffering caused by COVID-19.”

Dr. Roberts says of the 50 people who received the COVID-19 vaccine from the no waste list, about 50% came from Phase 1A and 1B groups.