When an east side couple was about to get linked in marriage, the bride's parents wanted an unforgettable wedding. 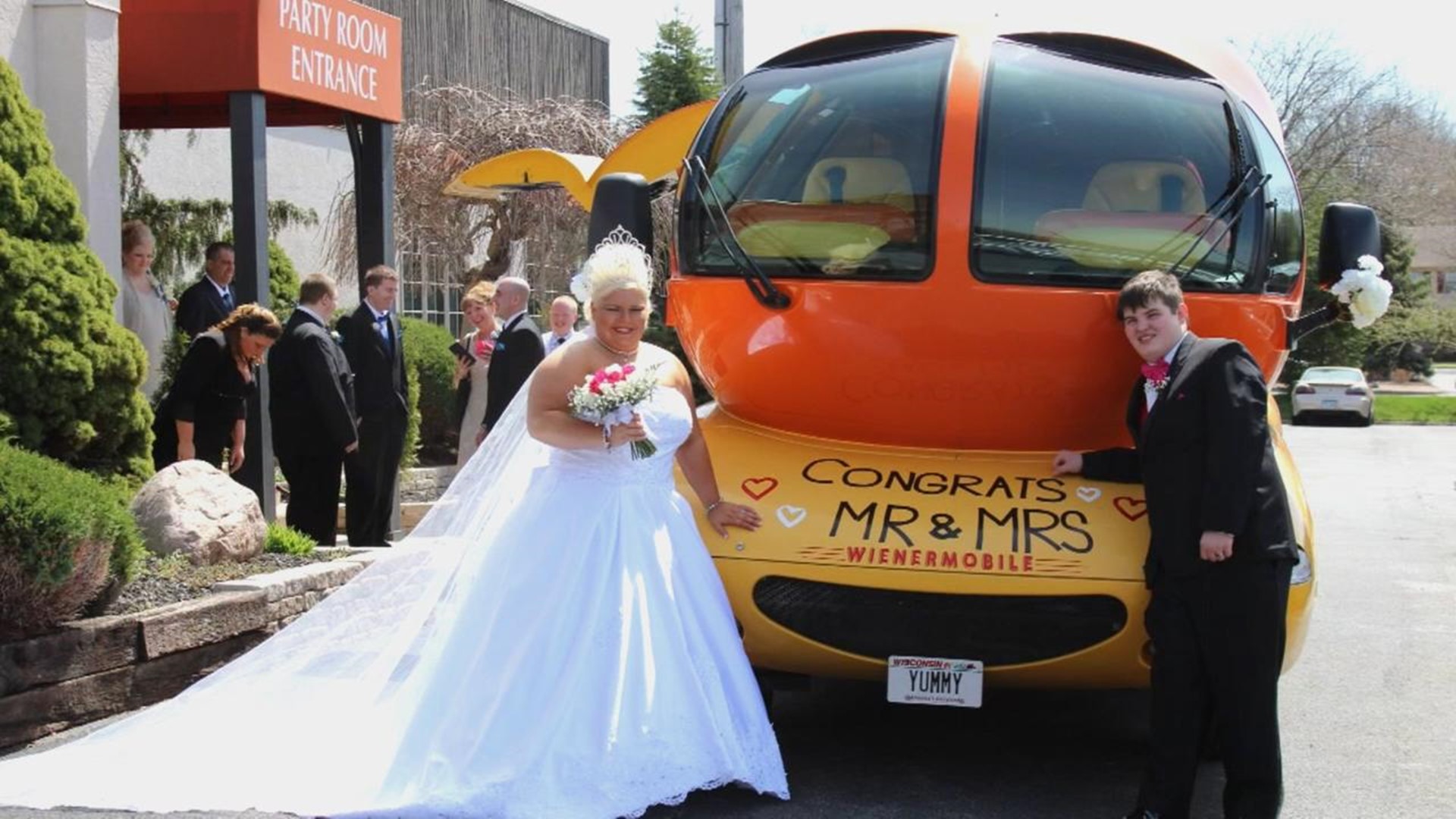 When an east side couple was about to get linked in marriage, the bride's parents wanted an unforgettable wedding.  So they arranged for an over-size tasty surprise for the bride and groom.

The day after the wedding of their elder daughter, Paige, Cassandra and Paul Jordan made sure they packed all the decorations: candy, napkins, a cake-topper of a Disney castle.  But it's not the decorations guests will remember. It's the way the bride arrived for the ceremony.

"Her wedding was a princess theme and she wanted a horse and carriage," said the father of the bride, Paul Jordan.

Her parents couldn't do that, so they hit upon another conveyance.

SLIDESHOW: View photos from the wedding

"So we're thinking and thinking," Paul explained.  "I said the Wienermobile because every time it comes to town, we're going to get pictures."

That's right - the Wienermobile - the four-wheeled Oscar Meyer hot dog that drives to supermarkets and fairs.

Cassandra said that every time the Weinermobile showed up in the Columbus area, the family would schedule a visit and take pictures, so she sent an email to corporate headquarters.

"I put that in the email - and weeks later - she called me from Oscar Meyer and said, 'We are going to be in town,' " Cassandra said.

The bridal party was getting ready at a hotel. So that's where the Wienermobile arrived, to take Paige to a Northside restaurant, site of the ceremony and dinner.

"When it drove up, it had flowers on  it.  It had tulle on it on so it makes it look like a veil."  Paul said.

And instead of a rope of cans tied to the back bumper, there were mustard and ketchup bottles.

Paige, on her honeymoon cruise, picked up the story by phone. She said at the hotel her father drew her attention to the parking lot.

"He was like, 'Your ride's here,' so I looked outside, and the Wienermobile was decorated with mister and missus on it, and it was amazing.  I was so shocked," Paige recalled.

"It was totally cool.  It was more than I imagined," Paul said.

It was more than the guests imagined, too. Since the groom, Ryan Peruzzi, wasn't allowed to see his bride before the ceremony, he didn't know what was causing the commotion when his bride arrived.

"Everyone was wanting to come out immediately and I'm like, 'we have to wait until after the ceremony, and then you can come out and visit with the Wienermobile,' because everybody wanted pictures with the Weinermobile," Cassandra said with a laugh.

Paul said they realize how short life can be, so he and his wife believe in living large.  They've passed that sense of fun onto daughters Paige and Sophia.  "We always try to do things above and beyond for our kids, and it just happened, and we got very fortunate."

Six Wienermobiles have been crossing the country since 1936.

Incidentally, if you want to pilot a hot dog, the company is now looking for drivers.