Altogether, between 100-150 people sustained injuries in the collision, police say.

The crash occurred shortly after 7 a.m. local time near the spa town of Bad Aibling, about 60km (37 miles) southeast of the Bavarian capital Munich.

The impact of the collision left train carriages fused together and partly derailed, according to a statement from train company Meridian, which described the crash as a "terrible accident." 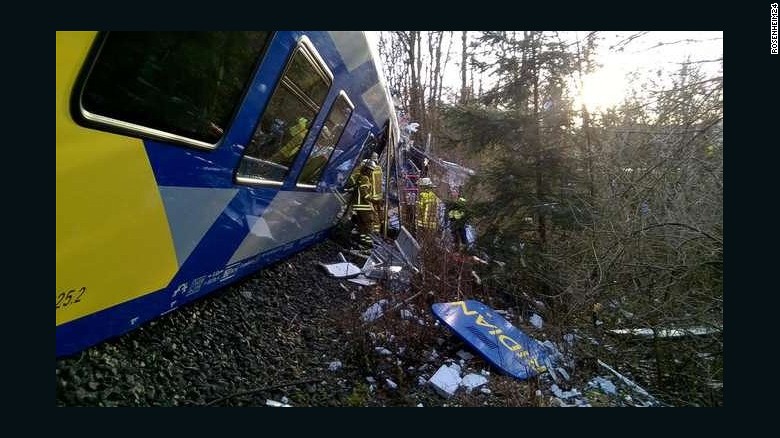 Rescue workers at the site of the train collision near Bad Aibling, Germany on Tuesday.

The impact of the collision left train carriages fused together and partly derailed, according to a statement from train company Meridian, which described the crash as a "terrible accident."

The crash occurred on the Mangfall Valley Railway, a single-track regional rail line running between the towns of Rosenheim and Holzkirchen, according to Meridian.

How the two trains came to collide head-on on a single rail line was still unclear, said the statement.

"The accident was a huge shock to us. We are doing everything to help travelers, families and employees," said Bernd Rosenbusch, managing director of Bayerische Oberlandbahn GmbH, which operates Meridian.

Meridian said it could not comment on the condition of the train drivers.

Helicopters were used to ferry rescue workers to the crash scene, where they worked to free people trapped in the wreckage and take the injured to hospitals. Emergency services have been called into service from around Germany and neighboring Austria.

German Justice Minister Heiko Maas tweeted his sympathies for those affected, writing in German: "Very bad news from #badaibling. Our thoughts are with the victims and injured. Thanks to the rescue workers."