While Black, Hispanic and Native American students saw the most significant increase in course failures, failing grades increased across every grade level. 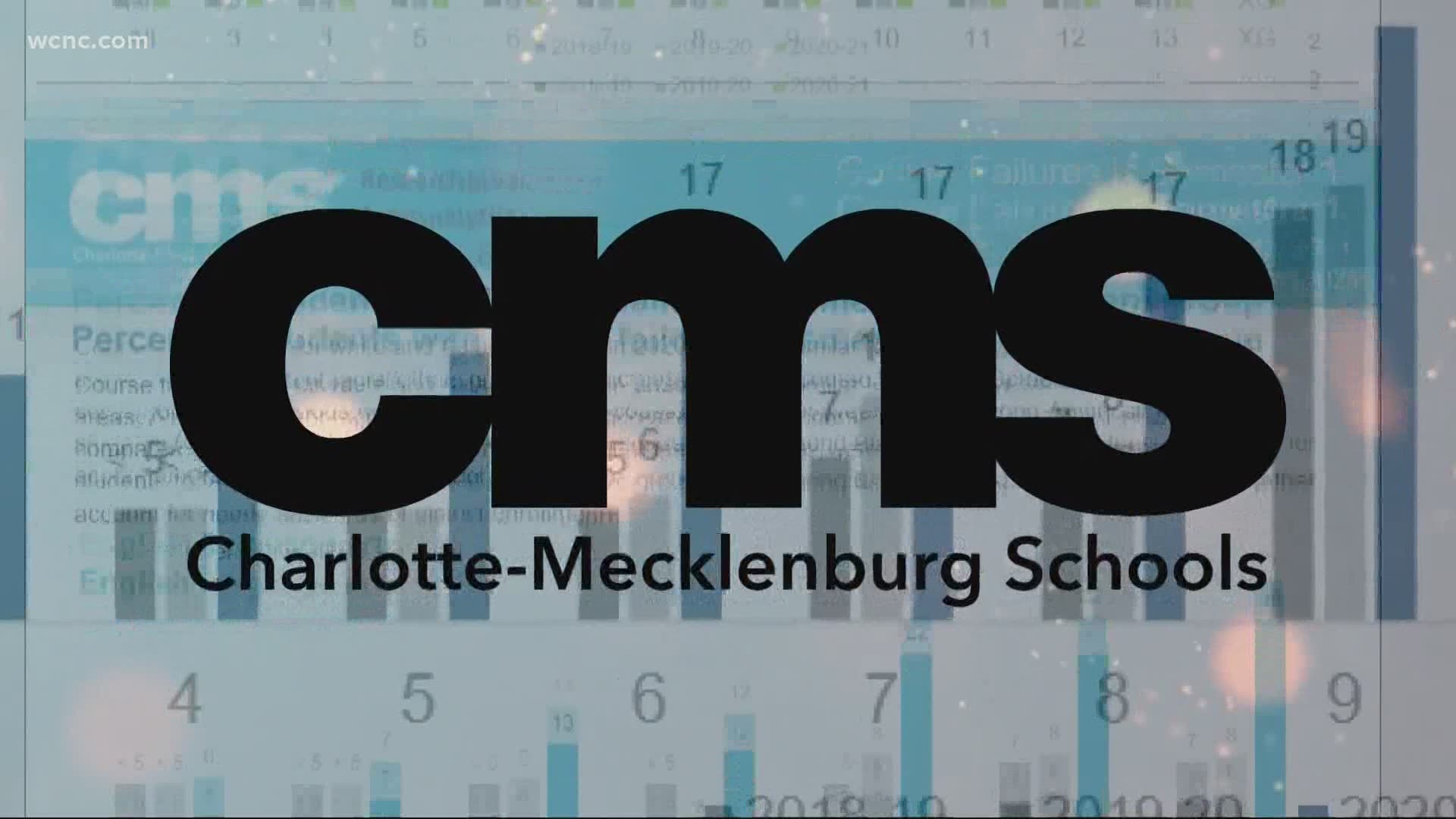 CHARLOTTE, N.C. — The academic performance gap is widening for Black, Latinx and Native American students in Charlotte-Mecklenburg Schools who saw their course failures triple in the first semester of the school year.

WCNC Charlotte requested data from CMS about course failure rates in the 2020-2021 school year, and the two prior academic years.

The data sets were broken down by race and by grade level.

In English, failure rates for Black students went from 8% to 22%. For Hispanic students, the rate was 25%, up from 8% the year prior. White and Asian students saw 6 and 7% failure rates, respectively, an increase of just one or two percentage points.

In science courses, Black and Latinx students saw their failing grades double or triple. A similar spike is noted in Math courses.

“We knew this thing was happening,” Dr. Devonya Govan-Hunt, president of the Black Child Development Institute, a nonprofit that aims to implement programs and services for Black families in the Charlotte community, said. “These children will have a very challenging time catching up.”

While Black, Hispanic and Native American students saw the most significant increase in course failures, failing grades increased across every grade level, subject and subgroup. Those increases were much smaller among white and Asian students.

The gap heightened significantly during the pandemic.

“The gap widened and it deepened,” Hunt said “If we don’t do something now, with intention, our communities are gonna pay for it for years and years to come,” Hunt cautioned.

Black and Latinx students make up 2/3 of CMS’s population overall. The future of the district’s success hinges on improving the scores of minority students, Govan-Hunt pointed out.

“This really put it out there on the front street to let us see ‘wow, these numbers don’t lie,” Lima-Neves said. “This is the reality that we have been living in and these numbers are now showing us that this is absolutely real. What do we do now to move forward?”

Lima-Neves said she believes a holistic approach is required. In addition to funding minority-majority schools and providing additional resources such as tutoring or summer programs, Lima-Neves is pushing schools to address the societal challenges and mental health components as well.

“Access to equitable education for all is the leading social justice issue of our time,” Lima-Neves said. “It’s important that we get in front of it with strategies as soon as possible.”

Chloe-Olivia Gloston is a singer, songwriter, anti-bullying advocate, and high school senior at Queen's Grant High School -- a charter school not affiliated with CMS -- who overachieves in everything she does. But this quarter, the scholar who is on track to graduate early, and has already been accepted to college, saw her grades plummet from mostly As and Bs to mostly Fs.

“I’ve never failed in my life,” Gloston said. “All those Fs, that’s a nightmare.”

The intense stress and demands of remote learning became overwhelming for the senior, her parents said. The teenager said on, an average day, she is working 14 hours on school assignments; her workload doubled.

“I’ve pretty much tried every single schedule in the book and none of them really, really worked for me,” Gloston said. “There’s a lot of pressure there.”

It has caused her to have several breakdowns this year; she felt guilty just sleeping.

“I was so anxious about the next day because I knew I had so much to do,” Gloston said.

Stories like Gloston’s are repeating in schools across the state.

The failing grades were most pervasive in middle school years, the same data set revealed.

In English, the number of students who failed courses first semester more than tripled in 6th grade, more than quadrupled in 7th grade, and tripled in 8th grade, when compared to the previous two school years.

Winston said the district is working to offer summer programs, wrap-around services, and intentional support for the students who would most benefit.

“That will certainly be a step in the right direction to help address the unfinished learning of many of our students,” he said.

Winston said he hopes the new pandemic grading system that prevents teachers from giving a “0” for unfinished assignments will alleviate some of the failing grades, and provide more opportunities for students to rebound in the 3rd and 4th quarters. 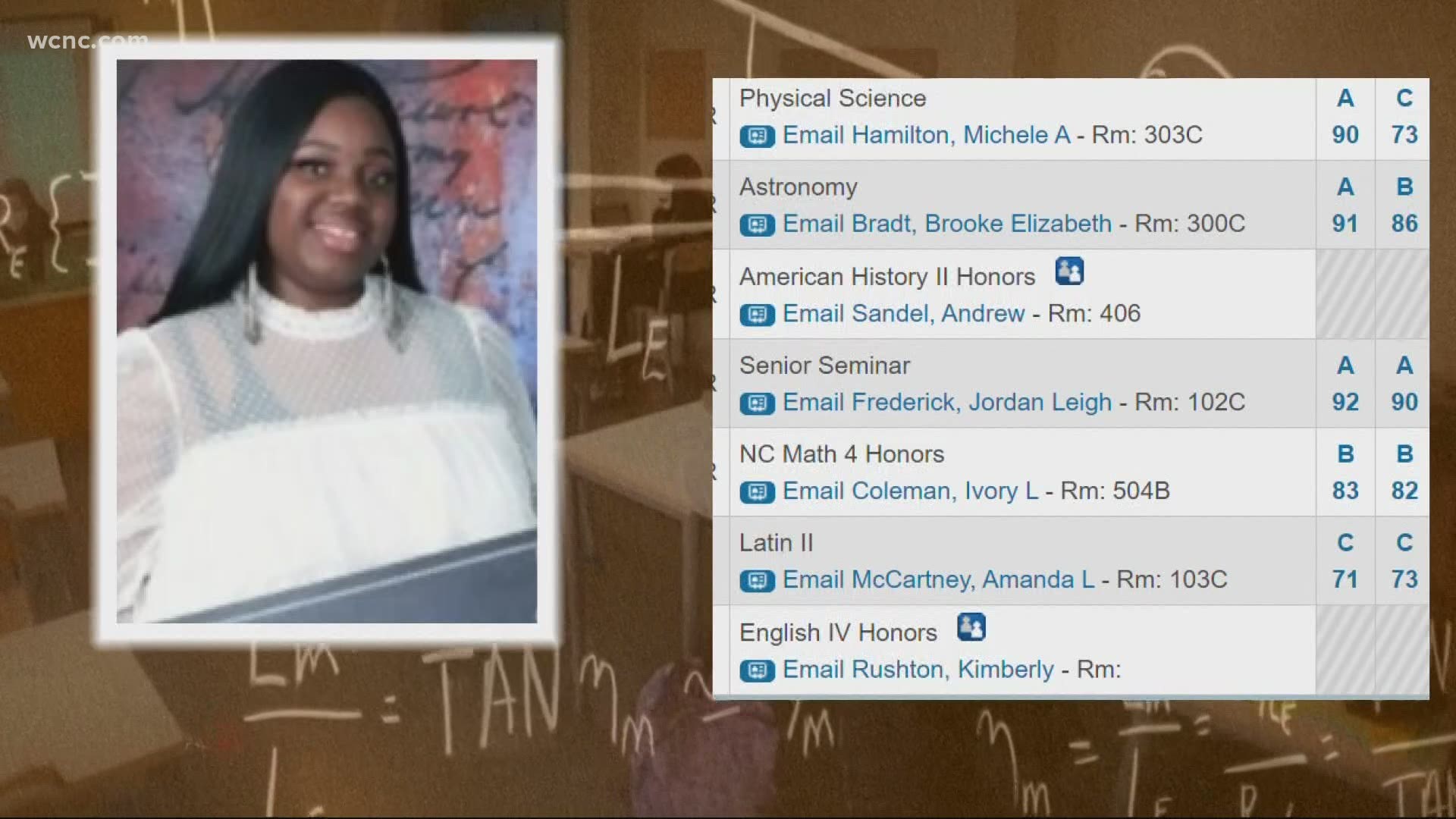 But while Winston acknowledged remote learning caused challenges for many students, he said that is not the sole cause for the slipping grades.

“At least a portion of this is the fact that we have students whose families have struggled during the pandemic,” Winston said.

Many students faced unexpected challenges at home that made academics less of a priority, he explained.

That said, he pledged continued efforts to properly identify the students who would most benefit from additional support.

Meanwhile, Gloston’s parents are working to provide her the academic and emotional support she needs to complete the school year.

Despite that help, she still worries about her future.

“I’m scared that I’m gonna get all these admissions that I’ve gotten pulled because of this little hole that we’re trying to dig ourselves out of,” she said. “No matter how hard you try and no matter what you do, it’s still not enough. And it just kinda makes us feel like we’re not enough.”

RELATED: 'I had called 67 times': Teaches are eligible for COVID-19 vaccines, but appointments aren't easy