Love Over Hate: Ohio State Student’s Tweet After Being Attacked For His Sexuality Goes Viral

An OSU student says he never expected to be attacked for being gay. But it's what happened next that truly left him stunned. 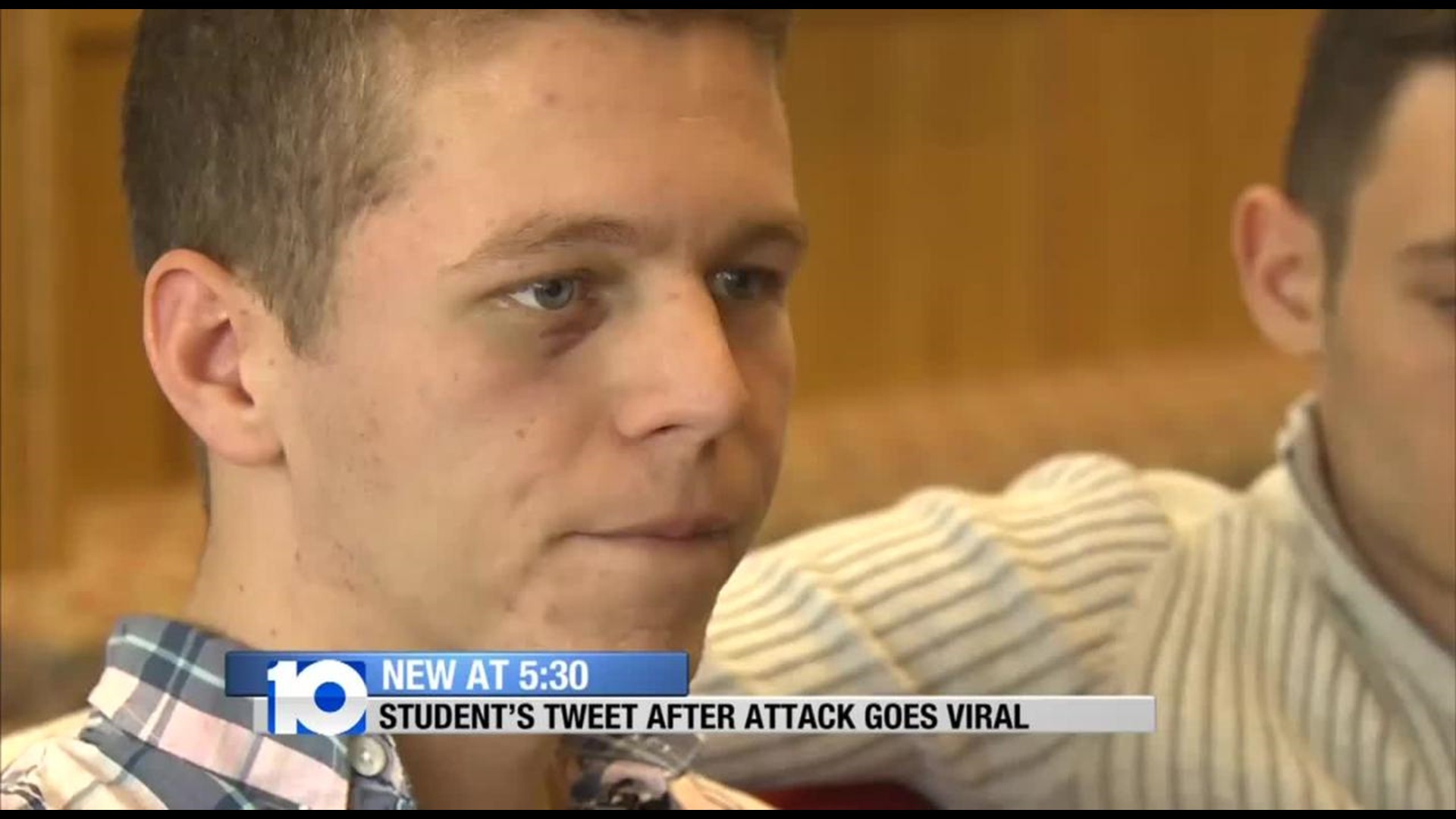 An OSU student says he never expected to be attacked for being gay.  But it's what happened next that truly left him stunned.

Cole Ledford says he was beaten and called a gay slur after kissing his boyfriend near campus last Thursday.  He took to social media with a message to his attacker.

In the face of a hateful act, he has been flooded with support from around the world.

"I'm a junior here at Ohio State. I feel like I'm pretty involved. I currently serve as the vice president of the Interfraternity Council, so I get to govern the 34 social fraternities. I really just love being involved and love Ohio State."

"It's one singular part of me,” he said. “Just like being a white male is. I don't think it should define me any more than any other characteristic."

But "gay" is all a stranger saw Thursday night as Cole and his boyfriend Jerad were saying good-bye to each other.  "He kissed me goodnight and turned across the street to walk away. It was raining so I tried to hurry home, and as I turned around, someone came up and actually punched me, yelling a gay expletive. Knocked me to the ground. By the time I got up, they were gone."

By the time Cole got home, he had a visible knot on his face.  He posted a photo, along with this message to his attacker:  "I'm sorry that you called me a fag. I'm sorry you hit me for no reason. I'm sorry whatever insecurities you have don't allow you to accept others for who they are. I'm sorry I threaten you.  I'm NOT sorry I'm gay. I'm proud to be this way. I'm proud to be confident enough to love who I love and to love me.  I'm proud to have friends and family that love me regardless of me. Honestly, I'm not sorry."

He says at the time he didn't give much thought to his words.  But through the power of social media, his moment of venting went viral, to the tune of 34,000 retweets, and 66,000 favorites.  His tweet got the attention of news organizations far and wide, traveling the globe, translated into multiple languages, seen by countless people.

“The first thing was, ‘Oh my God, I have to call my mom to make sure she hears it from me.’ I didn't call my mom the night it happened. So she wasn't really prepared for what was happening. So by the time I called her, I was already international."

Initially, Cole’s boyfriend Jerad Williams says the attack made him question his most innocent of instincts.  "We were in the store, and I went to hold his hand and I stopped myself for a second. And it came to my mind, what's going to happen if I hold his hand? It was an unnerving thought."

But then he saw the tidal wave of support from around the world:

"You're a good man. And your message is beautiful"

On Monday, he shows affection without fear.  "Your act of violence isn't going to change who I am as a person,” Williams said. “I'm stronger. We're stronger.

“My message to the guy who did this is, I'm sorry you felt the need to do this,” said Ledford. “But thank you for showing me and the rest of the world that love is truly greater than hate."

Cole says the message that touched him most was from a young man in Texas who said Cole's strength after being attacked gave him the courage to come out to his parents.

He and Jerad have received messages of support from as far away as Singapore and South Africa.