Many write them off as criminals and lost causes, but a Franklin County judge is working to change the way central Ohio looks at prostitutes and the dark, brutal business of selling sex in central Ohio. Get the story. 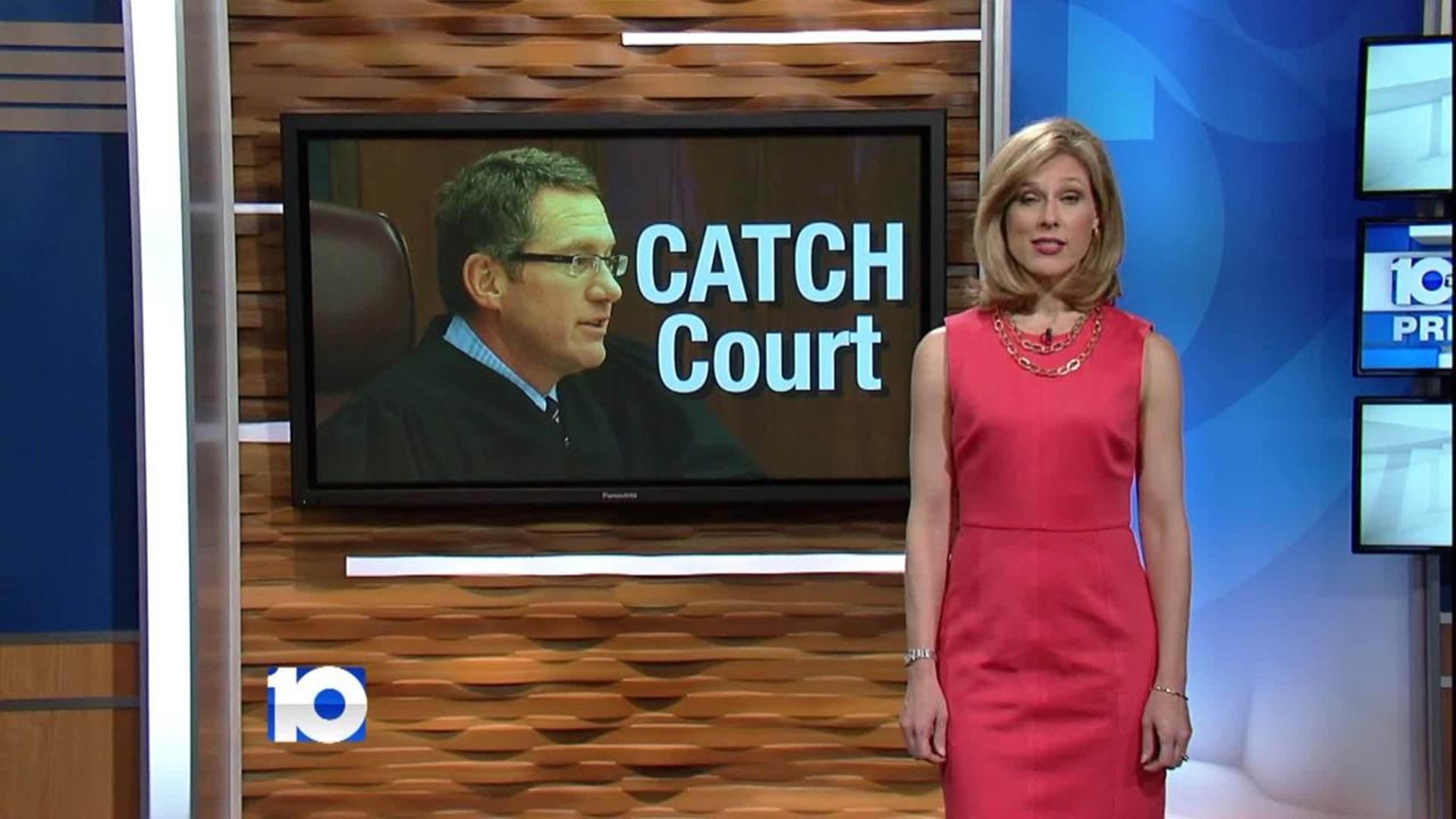 It's Thursday afternoon in Courtroom 12-C. In the words of some, it is a place where miracles happen.

The honorable Paul Herbert is presiding, and CATCH Court is in session.

On a recent Thursday, there were women new to the program, and there were those who've completed it, like Barbara Freeman.

"I graduated over two years ago, almost three years. You know what I'm saying? And I still come back because I need my sisters," said Freeman.

And there are many in between. They are sisters of the streets.

"No, y'all didn't sit there with me when I was going through it,” said Freeman to the other women in the courtroom. “But y'all my sisters, because we all linked together. You know what I'm saying? We all was prostitutes."

Prostitute is a word that conjures many images, none of them positive.

But the man running the courtroom says it is past time to change how we perceive prostitution in our city.

He admits he wasn't always so enlightened.

"I was the guy who used to say, ‘This is the world's oldest profession.’ You would have heard those words come out of my mouth. I was the guy that would have said this is a victimless crime. Two consenting adults, change of money,” he explained.

Herbert recalls the day of his epiphany. His bench was buried under dozens of protection orders related to domestic violence cases.

"After seeing victim after victim, you know, you see the bright red marks from the choking, clumps of hair pulled out, black eyes, burns, broken bones, pictures from hospital rooms, I was getting overwhelmed with this sea of horrible things that people do to other people. And I actually was sitting there saying, ‘How can I not do this?’ How can I pick another career? And then, the sheriff brought the next defendant out on the wall. And (I) looked over, and for a split second, a fraction of a second, I saw a domestic violence victim. But she was a defendant. And so I looked down at the file, and it said 'prostitute'."

It drove him to learn more.

"What influences, forces, and other things might impact a woman in order for her to take what's most personally precious, and sell it to vile strangers? And from there, that's when I learned the amazing statistics behind the truth."

"So you're dealing with young girls that aren't even of legal consent, getting involved in this," said Herbert.

Ninety-six percent of them are runaways.

Seventy-two percent of them are driven from home by physical or sexual abuse.

Desperate for shelter, protection, and now drugs, they are methodically broken down and turned out -- sold for sex.

Today, Herbert's eyes are open to the brutal, sadistic world of human trafficking in central Ohio. And what he's seen is horrific.

"The human traffickers and pimps - they have a game they play. It's called a '150' and a ‘150’ is where they take bets, and they see who can beat a woman to the closest point to where she needs 150 stitches worth of damage. It's just a game they play,” he said. "Broken bones, multiple rapes -- the pimps will slip them a ‘roofie’ and they'll wake up in Akron at a bachelor party being raped by seven guys. This is a common sort of thing that happens. And that guy made a ton of money off that."
Who survives such horrors?

The women in this courtroom do.

Vannessa Cooper remembers her lowest point on the streets after a car accident that had broken her back in three places.

"Not even a month after I got out of the hospital, and I still have this big plastic back-brace, and I found myself on the corner of Main and Berkley in a back-brace, prostituting and getting in and out of cars. And people still picked me up. They didn't even care,” she said. "I found myself standing on the corner, praying to God, like how do I get out of this?  How do I get away from this?"

For Cooper and dozens of other women, CATCH Court was that answer.

Instead of continually cycling soliciting defendants through the system as criminals who break the law willingly, CATCH Court recognizes them as victims in need of help.

"When I looked at the traumatic stress they've been through, the depression that they're in, the homelessness, job skills, the shame and guilt that comes along with our society placing on them, I thought it would be a great challenge to figure out a way to treat these folks differently,” explained Herbert.

As part of that different approach, instead of once a month probation meetings, for some, they are once a day. There are weekly court hearings, too.

There is gender-specific, trauma-based counseling, along with drug and alcohol treatment.

And there are rules: parts of town they can't go, people they can't see.

"And we have a set time for curfew. And I want everybody to tell you -- when's your curfew?” Herbert asks the women in his court.

In unison, the women answer, “Dark!”

“It's easy right?” said Herbert. “So when the sun comes down, Tiffany comes in, right? Or you have to be with someone safe because nothing good happens after dark."

Along with the restrictions comes support from those who have been there.

Barbara Freeman, who brought Nella into the program, asks her, "What do you need from your sisters?”
“Some love,” Nella quietly responds. “I need some love."

One by one, the women in the program, tears streaking their faces, approach Nella with a supportive hug.

They are treated with decency and simple dignity.

"God put a seed in your heart to look at women as women, and us as women, not as prostitutes and crackheads,” said Wendy Miller to Judge Herbert after she is recognized for more than 1,100 days clean and sober. "And that's a real, true honor, to be looked at as a woman today."

Two years removed from the darkness of the streets came the light of a new life.

"The women of the CATCH Court program, to know them will inspire you,” said Herbert to a crowd of dozens at the Governor’s Mansion for the graduation ceremony. "These are amazing women."

"I'm a fulltime student at Columbus State,” she announces to cheers and applause. “I've been on the Dean's List, and I was recently inducted into Phi Beta Kappa.”

“I'm real proud of myself today. And I like myself today. And that's a huge thing,” says Evans. “Before, I was totally disgusted with myself. I prayed to God every day that he would take me. And even he didn't want me."

"There are people here today who have saved my life," says Perkins. "Today I have a purpose, a reason to live. Today, I'm a graduate of CATCH!"

Along with a diploma and a photo album detailing their long journey, they are given something else.

"I hand them a piece of paper that dismisses and seals all of their convictions,” said Herbert. “It's like your debt's paid, you're free. And they love that."

Some of what they receive can't be quantified or spelled out on any piece of paper.

"When you see that woman who's almost dead, who's been taken advantage of since she was 14 years old, sold into a gang, and then she becomes that, that's amazing," said Herbert.

He is convinced that recognizing these women as victims, not criminals, providing support instead of just a jail sentence, is how you turn a victim into a survivor.

"They're going to college, they're getting valid driver's licenses, they're paying taxes, they're being reunited with their family, they're giving back to their community. That's what justice ought to be about."

There is also the financial aspect of this issue.

That doesn't include costs associated with hospitalizations from beatings, care related to unwanted pregnancies and foster care for children born to these women.

In its first four years, CATCH Court has a graduation rate of just 12 percent.

But of the women who spend 90 days in the program, 60 percent do not recidivate.

Those who spend 180 days in the program, 72 percent have no new charges.

And among those who have graduated, more than 90 percent have successfully moved on with no new charges.