Lemon laws: Fine print that could cost you big money

How many times have you made a major purchase, signed what seemed like a million documents, but you didn’t read all of them? 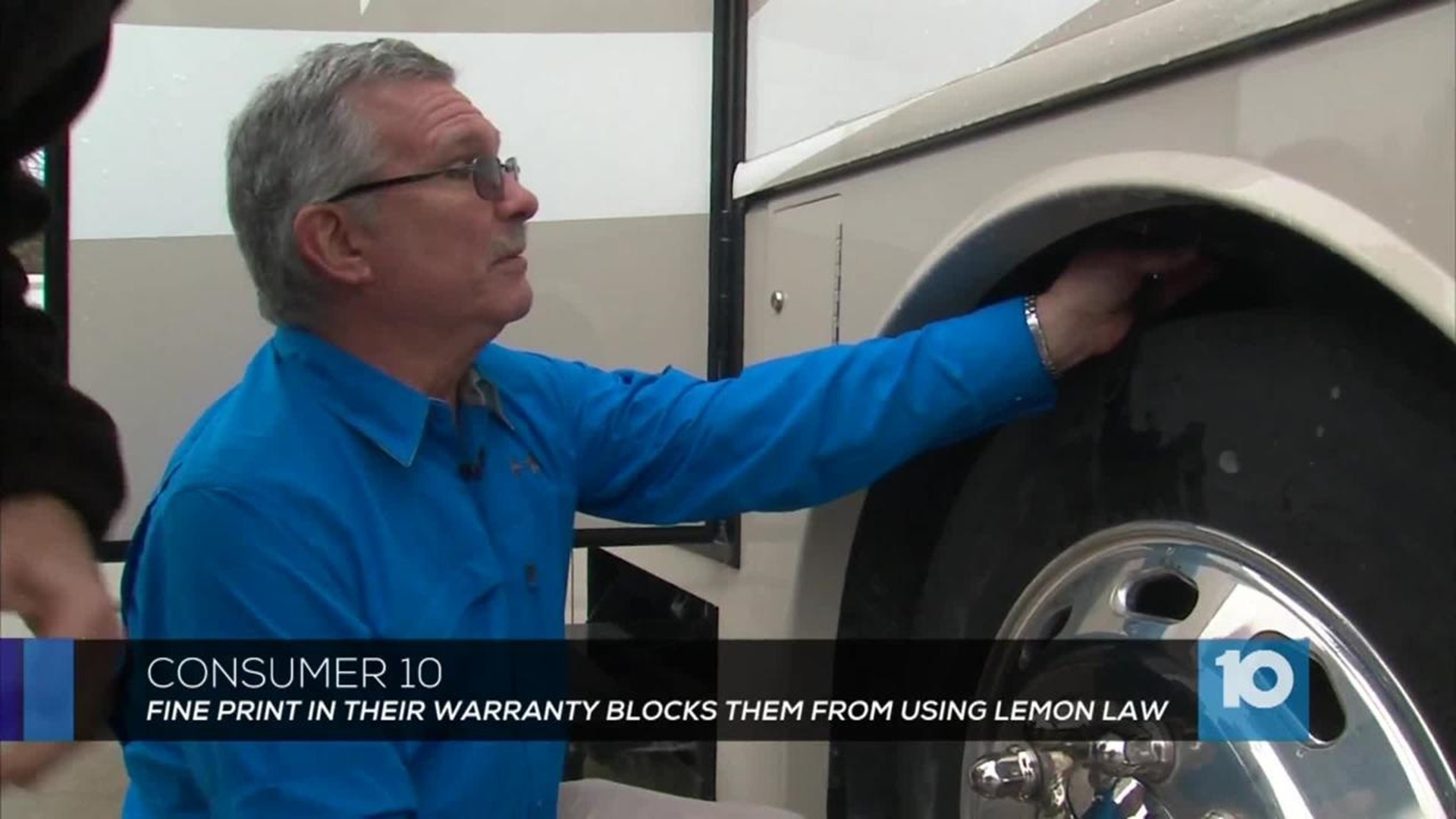 This story embodies the very mission of Consumer 10 – to protect – save and empower you.

It’s the story of the dream RV purchase by a retired Ohio couple but on the day they got the keys they may have signed their rights away. And it could happen to you.

Their story has an added twist, though: A discovery along the way that they claim also made the RV a safety hazard to them and to you on the road.

First, the list of problems with the since Kevin and Julie Murphy purchased it in 2015is extensive: loss of engine power, windshield wipers that fly off, storage bins that leak, defroster doesn’t work and many water leaks inside the RV.

They’ve been stranded on many road trips and not just the two of them. Family members including their young grandson have witnessed the problems too.

They also bought a jeep to tow behind it the RV so factor in everything and it’s pushing a quarter of a million dollars.

In the interest of full disclosure, the Murphy’s hit a deer on one trip but it’s through that accident they’ve discovered another problem; one way more serious than just leaking water.

“So we took it to a mechanic and he looked underneath and found out that the welds were broken,” Julie Murphy said.

Welds are the steel welding that keeps the motorhome attached to the chassis. If the welds are cracked or broken, two mechanics said it’s a major safety issue.

“We got somebody from state farm to come out and have a look at it and we got a letter that says ‘no’, this was a manufacturing defect and this was not caused by the accident,” Julie Murphy said. “Fleetwood should be embarrassed that they made this thing.”

The Murphy’s bought the RV from RCD of Ohio. RCD said the welds are a manufacturing problem and the Murphy’s would have to take it up with the manufacturer, Fleetwood. However, after dozens of problems, being stranded on road trips and now a safety issue with their RV, the Murphy’s wanted out.

“Our grandson has been in this vehicle. Our grandson, our daughter in law, my son. It could have wiped out three generations of our family,” Julie Murphy said.

Their RV qualifies as a lemon under Ohio law. They bought it from an Ohio dealer but Kevin signed a document called the ‘customer certification’ at purchase.

It says as the owner he “… received the owner’s manual -- and accepts the terms and conditions.”

In the back of the owner’s manual, within two paragraphs: “Indiana law shall exclusively govern this limited warranty. Any action to enforce shall be filed in Allen County or Adams County Indiana.”

Kevin’s signature on the other form states he agreed to this.

The Murphy’s are now suing Fleetwood and Freightliner, the chassis builder. Their case is in Indiana federal court.

Indiana is the RV manufacturing capital of the world and at least one law there is written favorably for the industry. Indiana law doesn’t recognize RV’s as lemons.

So the Murphy’s may have signed off on their legal rights when they signed those documents at RCD. It’s truly a story of buyer beware and to always read the fine print.

It’s one thing to ignore the fine print in a mobile phone contract but in this case, the Murphy’s spent hundreds of thousands and dollars from their retirement and may never get it back.

We’ll keep you posted on the court case.

Recalls, hackers and scams. How do you keep your family safe? That’s where Consumer 10 comes in. Every week we’ll show you what to watch out for and how to save your time and money.