Wyatt Field of Sabattus is the son of Courtney Field, who lost her mother, stepfather, and niece in last Friday's fatal crash on Route 1 in Brunswick. 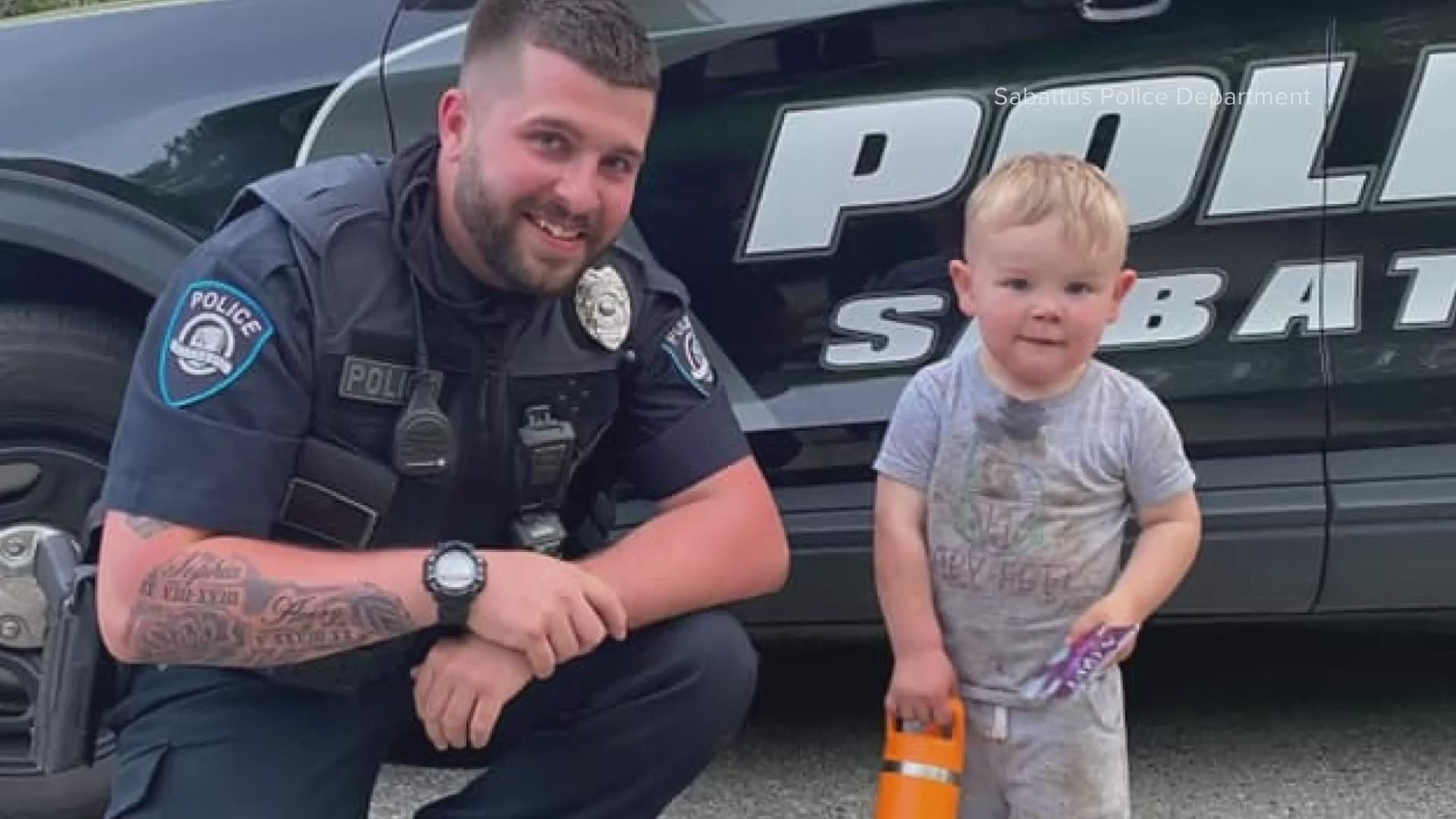 SABATTUS, Maine — It's an unlikely picture -- a friendship between a burly police officer and a small, blonde two-year-old boy. On Thursday morning, patrol officer Michael Rioux played with Wyatt Field of Sabattus, letting him switch on the cruiser's flashing lights and blare the horn. The laughter shared is a stark contrast to the tragic circumstances that connected them.

Rioux was the notifying officer who told Wyatt's mother, Courtney Field, that her mother, Dawn Astor, 43; her stepfather, Anthony Astor, 50; and her six-year-old niece, Eleina Astor, died in a car crash on Friday, May 14, on Route 1 in Brunswick. The only survivor of the crash was Eleina's four-year-old brother, Carson.

"It's almost like you say something, and you watch a family's heart break right in front of you, based off what you told them," Rioux explained, relaying what it was like giving the Field family the sad news. This was his first death notification ever, having recently joined the Sabattus Police Department in January.

A Sabattus Police Department Facebook post has received a lot of positive attention this week, after last Friday's Brunswick crash that killed three people. How an officer's act of kindness is helping this family get through tough times on @newscentermaine at 6:30 a.m. #wakeMEup pic.twitter.com/6Qpgyv0Ozn

RELATED: Two adults, one child dead after crash on Route 1 in Brunswick

Courtney says she remembers exactly how that conversation around 6 p.m. went.

"(Rioux) told me about my mom first, and I just fell to the ground," Courtney expressed. "It was just -- there is no feeling like it."

Courtney says she and her four brothers are still trying to process the loss of their loved ones, noting it's something you never expect would happen to you. She says the day she found out about the crash, there was also something else on her mind.

"One of my first thoughts was, 'Oh my God -- Wyatt is supposed to have his party tomorrow,'" Courtney admitted.

That celebration was cancelled and Rioux says he remembers thinking about the situation over the next couple of days while he was off, having talked to Courtney and her husband for a couple of hours the evening he let them know what had happened. It's why he decided to take some initiative outside of his job description, buying a $25 Visa gift card for Wyatt and delivering it a few days later.

"I mean, nobody expects to see the police officer again," Courtney said, also noting how grateful she is for the newly-developed bond between Rioux and Wyatt.

RELATED: Stories of heroism emerge from those first at the scene of triple fatal crash

Lieutenant Dan Davies says he is proud to have Rioux on the team.

"(It) exactly showed what a small-town community is about," Davies said about the gesture.

It's a message he hopes will get across to people in a time when support for police is divided.

"What's behind the badge, what's in the uniform is a human being -- somebody that does care," Davies expressed.

"It's almost just like humans being humans," Rioux shrugged.

Courtney says she and her family are planning to throw a second birthday party for Wyatt at some point -- and they're hoping his new friend Officer Rioux will make an appearance in his cruiser.